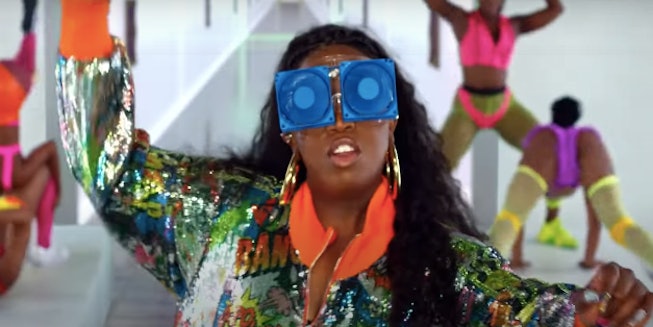 Remember museums? Those expansive, white-walled institutions filled with art? Missy Elliott is here to remind you of one of the relics of the old world with her new music video for "Cool Off," the second track off her 2019 EP Iconology.

The energetic video doesn't waste a single moment, opening in on a classical bronze statue installation that features Elliott front and center. The rest of the bronze statues are obviously dancing their asses off — this is a Missy Elliott music video, after all — and soon enough, the museum warps into an enviable little club. Another bygone pastime! There's twerking, pop art interjections, lots of neon spandex fits, some Dan Flavin-adjacent lighting, and Elliott whirling around the gallery space as a very cool roly-poly toy.

The Daniel Russell-directed clip also includes a cameo from singer Teyana Taylor, reprising her role as the high-fashion museum guide from the videos for "DripDemeanor" and "Throw It Back." Taylor talks to her one-person tour about Elliott, calling her “the greatest, most timeless woman of all time.” No lies were told! The sentiment has always been there, but it was made official in summer 2019; Elliott received MTV’s highest accolade, the Video Vanguard Award, which honored her outstanding achievements in the medium.