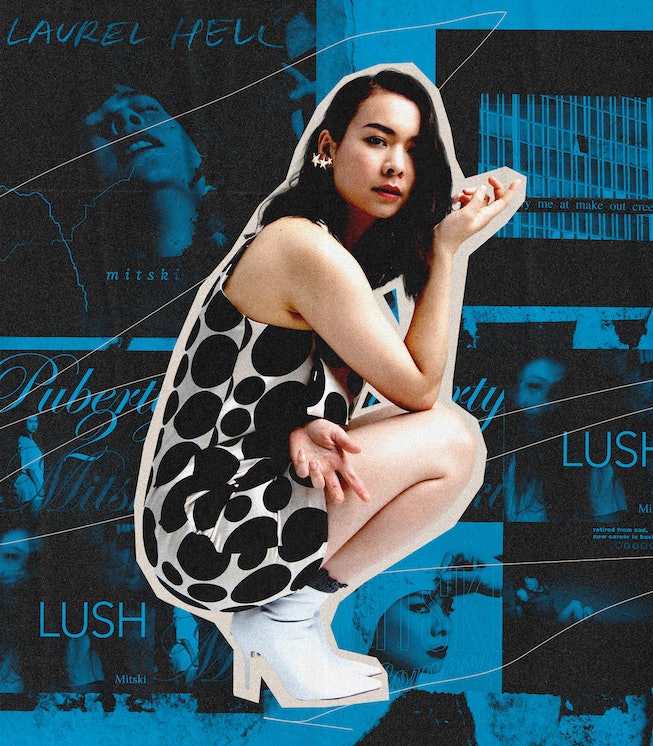 How does one quantify the harbinger of heartbreak? By making some stans mad, probably. With six albums under her belt, Mitski has achieved a level of indie fame that impresses into the mainstream — she’s opening for Harry Styles on his tour — and, more significantly, inspires a militantly adoring fanbase, their devotion often a crux in her later work.

Her first two albums, Lush and Retired from Sad, New Career in Business, were released as part of her time in SUNY Purchase’s music composition major, and the following album, Bury Me at Makeout Creek, was an easy indie-rock entry into the house-show and music critic Venn diagram. After that, Puberty 2 gained steam (but slowly; I was still able to see her in a part-hookah lounge, part-record shop, standing on toes to get a better view as the venue quickly slipped beneath the crowd she called). 2018’s Be the Cowboy was an instant darling among fans and critics alike and, afterward, Mitski exploded in notoriety, opening for the likes of Lorde and commanding more acclaim and attention than ever. Now, the glitchy ‘80s pop Laurel Hell has entered the scene.

When trying to rank Mitski’s work, the angle has to be considered. Is it: “Which ruined my life the most, hurt the most, like Natalie Portman ripping her cuticle down the whole finger in Black Swan?” Or is it: “No one could do this, no one has sounded like this, the ambition is unmatched?” For the sake of a more holistic view, this list errs toward the latter, but each album carries its own little legacy of heartbreak.

With the release of her latest album, Laurel Hell, NYLON looked back at Mitski’s body of work.

This was an easy choice logistically; it’s Mitski’s first album, created when she was a student in SUNY Purchase’s composition program. But the ranking shouldn’t obscure its potential. Her most piano-laden work, Lush stands to its name: a series of vivid, smooth, and unraveling narratives. Hearkening to jazz’s vocal deftness, Lush relies most upon tumbling melodies, with backing instrumentation far more monotonal and carefully, steadily timed.

Standouts like “Real Men” and “Brand New City” animate the album’s core strengths: an ominous propulsion helmed by melody and lyrics, and the potential to, well, shred (the lyrics, “If I gave up on being pretty/ I wouldn’t know how to be alive,” cried over just strings and drums? Haunting). There’s an impulse here towards showmanship, songs that wouldn’t feel out of place in a modern (very sad) musical. Perhaps the album most interested in gender relations, there’s an eerie undercurrent of violence, and with that the tightrope-walk between empowerment and the need for approval — just look to “Wife,” a precursor to both Be the Cowboy’s “Me and My Husband” and Puberty 2’s “Happy.”

While “Brand New City” is a direct lead-in to Bury Me at Makeout Creek’s rock, songs like “Abbey,” with its choral, reverential echoes, point to the experimentation to come.

In the video for Laurel Hell’s first single, “Working for the Knife,” Mitski takes off her cowboy hat. The artifice is done; the protagonist cowboy era has ended. Likewise, Laurel Hell casts off characters altogether, dropping narrative from its songs as the album favors abstractions and various iterations of identity.

“Heat Lightning” is the highlight of the album’s futility, imbued with a grave, mystic timelessness, and “Should’ve Been Me” highlights that winky, honky fun of Retired from Sad, New Career in Business with tongue-in-cheek joy smothering sadder lyrics.

Laurel Hell’s ‘80s pop and synth-forward rock present a completely new and exciting direction in Mitski’s stylistic repertoire, but its attention to the mutability of identity and its lack of physical place render the album itself a bit intangible. Reckoning with creation and consumption, the need to be loved and her fear of that love, Mitski’s musical maturity grants the confidence that does ground the album and Laurel Hell’s upbeat, assured songs ring truest.

It might be controversial to drop Bury Me at Makeout Creek so low on the list and I won’t lie — it hurts that this is where it’s landed. With its foregrounded vocals, shredding guitars, and oft-haunting quiet, it’s far from a low-tier album. Here, Mitski offers some of the most poignant lyrics and accompanying vocal lines of her career: “Wild women don’t get the blues/ But I find that/ Lately I've been crying like a/ Tall child”; “I want a love that falls as fast as a body from a balcony”; and “If your hands need to break/ More than trinkets in your room/ You can lean on my arm/ As you break my heart” among them.

Her breakthrough album — as her first post-college effort and first released on a label — is quintessential indie rock. It’s for stewing in sadness and sitting up with anger; it’s an exploration of gender and identity bottled in a both mournful and grungy retelling. The pounding war drums of “Drunk Walk Home” crescendo into her scream; “Texas Reznikoff” and “Francis Forever” create a barren, staticky land for her voice and guitar to ripple through; “Townie” is perfectly reckless. It’s raw on both ends of the spectrum, but it’s not the most innovative album on the list. It’s an impressive entry in the indie rock canon but not the most thoughtful in Mitski’s breadth.

The second of Mitski’s student albums, Retired from Sad, New Career in Business revealed a wellspring of off-kilter methods and executions. Melodies moved unexpectedly, and she experimented with syncopated rhythms. The production was firmly secondary to her voice and lyrics.

Armed with a 60-person student orchestra, Retired from Sad grasps the potential of songs as vignettes, permitting an album to switch up sonically by the minute. The wry “Strawberry Blonde” — still a fan-favorite encore — claps and winks alongside the claustrophobic “Shame,” its sharp-toned strings ramping with more and more anxiety over her plaintive fretting: “I’ve never been very good/ I haven’t been so good.” Her worries on Retired from Sad turn outward toward the future (facing graduation) and inward in self-excoriation.

It’d be remiss to omit the gut-punch “Class of 2013,” a tentpole for her affected wailing, the significance of vocal strain in a painful song. It’s unmooring. Retired from Sad is a feat, an album that can both waltz and unsettle, clap and creep. Later efforts — notably, Be the Cowboy — improve on its foundation.

Puberty 2 couldn’t exist with Bury Me at Makeout Creek but it crackles and pops so much harsher. A second coming, Mitski’s indie rock bend is more refined, and her pop leanings start to poke through her growls. Puberty 2 grounds itself in growth; Just as she comes to accept herself on “Your Best American Girl,” she enmeshes anxieties about love and loss amid a backdrop of unconventional instrumentation.

While Bury Me got rid of any explicit characters, here she brings them back to anchor the songs. As she invokes Dan (the dancer) or the housewife on “Happy,” she sings differently; monotonal and stolid one song, punchy and loud the next, crooning and kind on another, each vocal line melded to the song’s mode. Though each song takes a dramatic turn from the last, the album still feels utterly unified. Like “A Burning Hill”’s all-encompassing, all-knowing, self-destructive fire, Puberty 2 feeds upon its own insecurities and acceptances, burning in spite of and in service to itself.

An album littered with weariness, Puberty 2 sits in its small victories, those which we can control: “Today, I will wear a white button-down,” “I’ll love some littler things.” She needs such successes because when she tries to outrun adversity, as on “Fireworks,” it’ll always come back with a punch.

To call each song a vignette is too simplistic; each is an experience. On Be the Cowboy, songs generally hover around two minutes like a stab of sensation. Between the senseless disco on “Nobody,” the feedback shriek of “Geyser,” and the wonderfully, maddeningly syncopated “Old Friend” (the chorus is a waltz; the vocal line sure isn’t), she dances from Broadway to disco and further — the stories are isolated to their individual songs by their stark stylistic differences. As such, the characters live in worlds rendered by genre.

Becoming the cowboy means becoming lawless, powerful, and in control. And Mitski feels firmly in control of this unbudgeable album, its through line little more explicable than, “Oh yes, that’s Mitski, that’s Mitski all the way through.” All the same, Be the Cowboy’s elusiveness feels artful, at times reaching and receding. Its surprising key changes and rhythms are frantic enough to feel urgent, to equally beg and demand we pay attention.