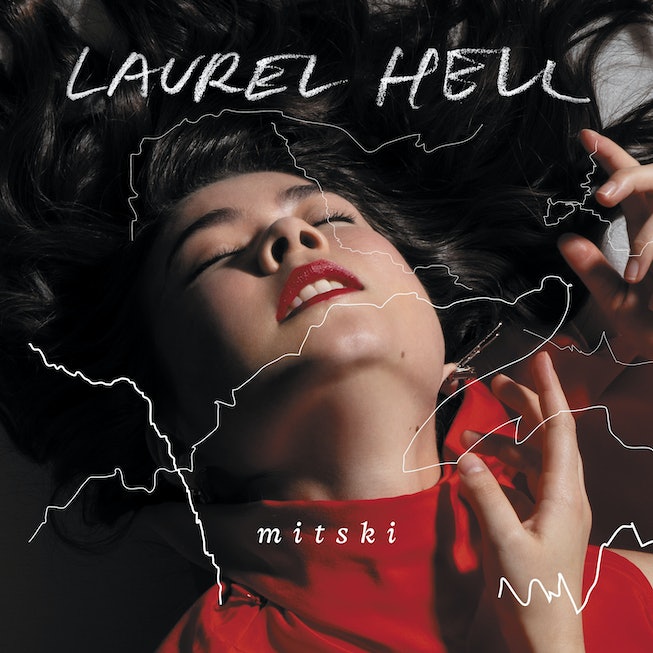 Goodbye, my cowboy sweetheart; welcome home, someone else. It’s been four years since Mitski released the post-Western elegy Be the Cowboy, an album that explored desires and dreams as lonely and gorgeous as a forever sky, and three years since she seemingly rode off into the sunset. But now one of our generation’s most poignant and pointed observers has returned. Years after she chanted “Change, change, change is gonna come, but when, when, when?”, the now 31-year-old Mitski finally has some answers, though based on her sixth album Laurel Hell, out February 4 via Dead Oceans, they’re not quite what she wanted to hear. Still, she’ll tell you all about them.

She wasn’t going to, except she was under contract to deliver one more set of songs. This contradiction, an album that almost never existed but had to, makes Laurel Hell an inherently curious entry in Mitski’s discography. Many of its tracks were written in 2018, making them closer contemporaries to Cowboy than the current cultural moment. But their collective thesis is evergreen: in a recent interview, she posited, “If I truly want the greatest magic in the world, the highest euphoria, the best thing [...] I’m going to have to pay an equivalent price.” Laurel Hell leaves you feeling thrilled but also wounded, like Mitski has offered you roses with no protective sleeve. But that’s how she was handed her own bouquet.

Since the start of her career, Mitski has become a lightning rod for all kinds of conversations: about race and gender representation in American pop music; songwriting craft; and perhaps most notably, loneliness as a crushing and static state. She gained a reputation as a patron saint of doomed love, its lingering wound, and the act of licking it, an assumption based on songs like “First Love / Late Spring,” “I Bet On Losing Dogs,” and of course, Cowboy’s breakout single “Nobody.”

The double-edged sword of notoriety based on excavating and exhibiting personal loneliness is that it leaves you wondering what else you have to give — and are expected to give — to be enough for everyone. The baby 20-something Mitski who used to scream into the mic at DIY venues while plucking a hot pink bass, and built a hardcore fanbase in part because of the darkly wry but also ebullient disclosures she posted on social media, had, by the time she was touring Cowboy, deliberately obscured more and more of herself from her public interactions to keep from becoming flash-frozen into a figurehead and to protect the people closest to her. When she neutrally announced an indefinite touring hiatus in late summer of 2019, she privately thought that she was finally leaving her longest-running romantic relationship: the stage that brought out her inner fire which, if left unchecked or fanned into a frenzy, would turn it into her funeral pyre.

So Mitski soft-blocked music, save for esoteric projects like a soundtrack for the graphic novel This Is Where We Fall or a collaboration with pop savant Allie X. And yet: the musician has returned in Aquarius season for an album that she now says she would’ve felt compelled to complete even without an outstanding business obligation. Suspended in this neat symbolism, Laurel Hell feels inherently introspective about the act of retrospection, resulting in a record that’s as bright-eyed and buoyant as it is paranoid and resigned, balancing those two moods at times unevenly, at times transcendently, but always with a sincerity that crosses the line from genuine to unnerving.

Laurel Hell leaves you feeling thrilled but also wounded, like Mitski has offered you roses with no protective sleeve.

The origin of the album’s name is an impassable thicket that ensnares you deeper the more you try to escape it. On paper, it’s an obvious metaphor for both living in a world that extracts your personhood for profit, and being in a diminishing love. Mitski’s proferred tactic for surviving these conditions consistently feels more like surrender, a suspicion made explicit through the long sigh of “Heat Lightning” and the glassy-eyed stillness of “I Guess,” a song reminiscent of the austere interludes from the back half of Cowboy. But surrender doesn’t necessarily mean defeat; “playing dead” isn’t the same as giving up. And just because something’s straight-forward doesn’t make it true. Mitski has always been a direct songwriter (a function as much stylistic as it is a capitulation to listeners’ attention spans), but throughout Laurel Hell something masquerading as forthright melancholy creeps beneath the surface of the songs.

Nowhere is this more evident than on “Working for the Knife” and “Everyone.” The former finds Mitski reflecting, “I always thought the choice was mine/ And I was right but I just chose wrong,” and on the latter she goes further, lamenting, “And I opened my arms wide to the dark/ I said take it all, whatever you want/ I didn’t know that I was young/ I didn’t know what it would take.” She scries herself, simultaneously the insect and the magnifying glass. It’s a matter of when, not if, she burns, but is she the burner or the burning? It’s a question she’s answered before.

But Laurel Hell’s panopticon is a little bit different. Mitski’s played with voyeuristic vignettes throughout her career, but the POV she slips into the most on Laurel Hell is that of a final girl, specifically one who spends the film playing peekaboo with her doppelganger before finally confronting “her.” Her use of “doppelganger and peephole” imagery too isn’t new, but it feels significant that her latest video for the Flashdance-meets-Halloween torrent “Love Me More” takes aesthetic cues from Lynchian horror. Mitski watches the person playing Mitski, play Mitski, dancing just a beat behind herself like the ending sequence of the film Annihilation.

In interviews leading up to the album’s release, Mitski talked about her fondness for the horror genre and repeatedly shouted out the streaming app Shudder. It’s not too far a leap to believe she’s referencing the Park Chan-wook film Stoker — in which the titular character undergoes an eerily calm metamorphosis — on “Stay Soft,” a jubilant romp which finds her confidently offering “advice” on surviving the cruel hard world, exclaiming, “Open up your heart/ Like the gates of Hell!”

The catharsis of the doppelganger is that it reveals what you cannot. Mitski consciously settled on ‘80s power pop pastiche for many of Laurel Hell’s songs to channel celebration during our uncertain days, but these rays of production brilliance fail as misdirection and instead highlight just how vast the darkness around them is. It’s ironic that the only true lyrical bright spot throughout the album is paired with production that leans into gothic darkness. Opener “Valentine, Texas” breaks like a wave when she sings the lines, “I’ll show you who my sweetheart’s never met/ Wet teeth, shining eyes/ Glimmering by a fire.” As the song expands into a full dirge like an aspect ratio shift, Mitski shifts perspective too, gazing at “Clouds [that] look like mountains / Let me watch those mountains from underneath/ And maybe they’ll finally/ Float off of me.”

On an album where many of the lyrics are direct entreaties to a formless “you,” the most informing asides appear on single “The Only Heartbreaker” as Mitski sings, “You’ll be by the window, only watching,” and then on the closing track “That’s Our Lamp,” where she once again shifts perspective: “I’m standing in the dark/ Looking up into our room/ Where you’ll be waiting for me/ Thinking that’s where you loved me.” In a world where people earnestly claim “Main Character Energy,” Mitski, who has unwittingly and unwillingly become a cultural Main Character, frantically flits in and out of the frame, the “window” that at times becomes her mirror, at times a peephole into her own real life. It’s too simple to say she’s singing to and about herself, but Laurel Hell’s doppelganger seems to be like a double exposure, one version of Mitski superimposed over another, splitting the burden of being on camera.

Mitski dances even if the venue is empty, but her Laurel Hell tour dates are sold out.

The bleak beauty of Laurel Hell is that it tilts into euphoric headrush but doesn’t shy away from how even the most spontaneous and thrilling emotions and encounters can become compulsory, self-harming transactions. Mitski’s consuming passion for music continues to push against the increasingly dynamic but draining creator/fan relationship, and her own yearning for something approaching normalcy. And yet, here she is offering vegan baked goods to reporters and hitting her choreography marks in elaborate videos. Mitski dances even if the venue is empty, but her Laurel Hell tour dates are sold out. Things changed for her a long time ago except, she finally knows how to have her (vegan) cake and eat it too. All she had to do was disappear. All she has to do is disappear.

In the years since Mitski broke out into the music scene, so many artists have stepped through her long shadow; peers like Japanese Breakfast and SASAMI who’ve emerged into their own light, but also newer artists like Frances Forever who cite her as a formative influence. It’s been a decade since Mitski released her debut record but after years of chasing the sun, in the Valentine season, the supposed patron saint of lonely hearts waits to be fired from a job she’d tried to quit. On “I Guess,” she sings, “If I could keep/ Anything of you/ I would keep/ Just this quiet after you.” There are bright things in the distance; they twinkle but she knows they are false stars. So Mitski lingers in the darkness, where you can only imagine your audience, or your doppelganger, or yourself. There and only there, you surrender, and survive.

Mitski’s Laurel Hell is out 2/4 via Dead Oceans