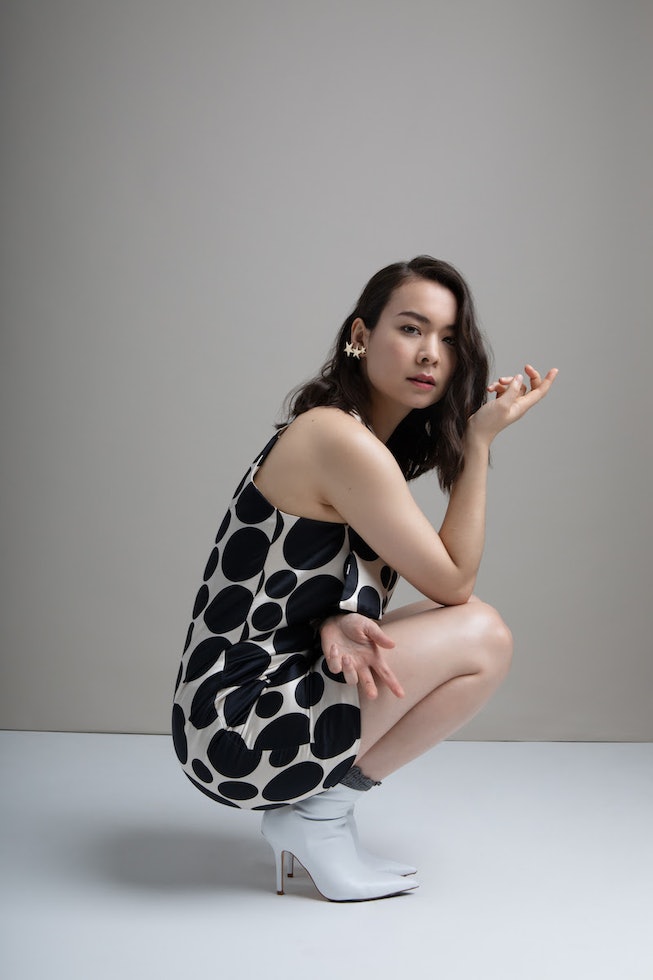 When it comes to writing pining, desperate, and ultimately tragic love songs, no one does it like Mitski. Ahead of the release of her new album Laurel Hell, the acclaimed indie singer-songwriter has shared her fourth pre-album single, “Love Me More,” a frenetic, racing synth-pop track that hits all of above boxes, and continues her lineage of crafting turbulent love anthems that might, at times, make you worried for her well-being.

Since Mitski began rolling out the singles for Laurel Hell in 2021, beginning with the solemn and stark “Working For The Knife,” the eventual arrival of her latest dispatch on her trials in love was inevitable. Each of her last albums had one: “Your Best American Girl” from Puberty 2, which involved her wanting to change herself for the object of her desires; “Townie” from Bury Me At Makeout Creek, which featured the iconic and maybe disturbing line, “I want a love that falls as fast/ As a body from the balcony;” and “Nobody” from Be The Cowboy, whose upbeat sound belied lyrics full of loneliness and feeling undesirable.

Thematically, “Love Me More” fits right alongside these iconic standout cuts from Mitski’s catalog. It’s a love song but it’s still a Mitski love song — and in this one, she’s writing about a love that will consume her to the point where she’s unrecognizable, where she’s wholly lost her identity (a desire that any decent therapist will inform you is toxic and definitely unhealthy). Still, it’s one of those things that we all think about and Mitski sings compellingly about the complicated emotion here.

Its opening lines immediately recall the sentiments of wanting to change the core of her identity that she previously made on “Your Best American Girl.” “If I keep myself at home/ I won’t make the same mistake/ That I made for 15 years/ I could be a new girl/ I will be a new girl,” she sings.

As the song progresses, whatever Mitski’s seemingly longing for reveals itself to be something that’s consuming her completely. It’s an itch that “I’m not supposed to scratch,” she sings on the pre-chorus; a maybe-bad habit that her mind can’t help but wander off to. “I wish that this would go away/ But when I’m done singing this song/ I will have to find something else/ To do to keep me here/ Something else to keep me here,” she admits.

So who — or what — is Mitski singing to? You could interpret it all straight-forwardly and assume she’s singing to someone with whom she’s found herself in a strained relationship. But we’re inclined to think the subject of her affection is a more abstract than that, and most likely related to her career, craft, and life’s calling: music.

Mitski’s intense relationship with writing music — and, in turn, with her own creative well and impulses — is well documented. “Geyser,” the first single of Be The Cowboy, was about just that and its lyrics are just as fervent and desperate-sounding.

Speaking to NPR in 2018 about the song and her inner muse, Mitski said: “I will be whatever it needs me to be. I will do whatever it needs me to do in order for me to continue to be able to make music.” It’s a sentiment that seems to echo what she’s singing about on “Love Me More.” However, on this latest track, Mitski appears to be displaying some resistance. She doesn’t seem to want to be all-in anymore.

Was it the inevitability of time, or something else that placed new strain on her relationship with her art? Notably, Mitski’s always seemed wary about the trappings of celebrity and fame. In 2019, when her visibility was at an all-time high following the critical acclaim of Be The Cowboy, she disappeared from the internet, deactivating her accounts with the world receiving little or no word from her until she reactivated them again in 2021 to begin promoting Laurel Hell. Even now, her accounts are pure business.

And surely, living through the past few years didn’t help. “As ‘Love Me More’ was written pre-2020, lyrics like ‘If I keep myself at home’ had different meanings than what they would now, but I kept them on the album because I found that some of the sentiments not only remained the same, but were accentuated by the lockdown,” Mitski said of “Love Me More” in a press statement.

I won’t pretend to understand what life is like under the scope of so many eyes, waiting and watching your every move. And given the headline of a recent Rolling Stone cover story, I’ll assume that Mitski’s more or less ironed out whatever was plaguing her on this track. What is certain, though, is despite whatever she’s singing about on “Love Me More,” the song has definitely earned its place on alongside her other great examinations on love.

See everything we know about Laurel Hell so far, here.