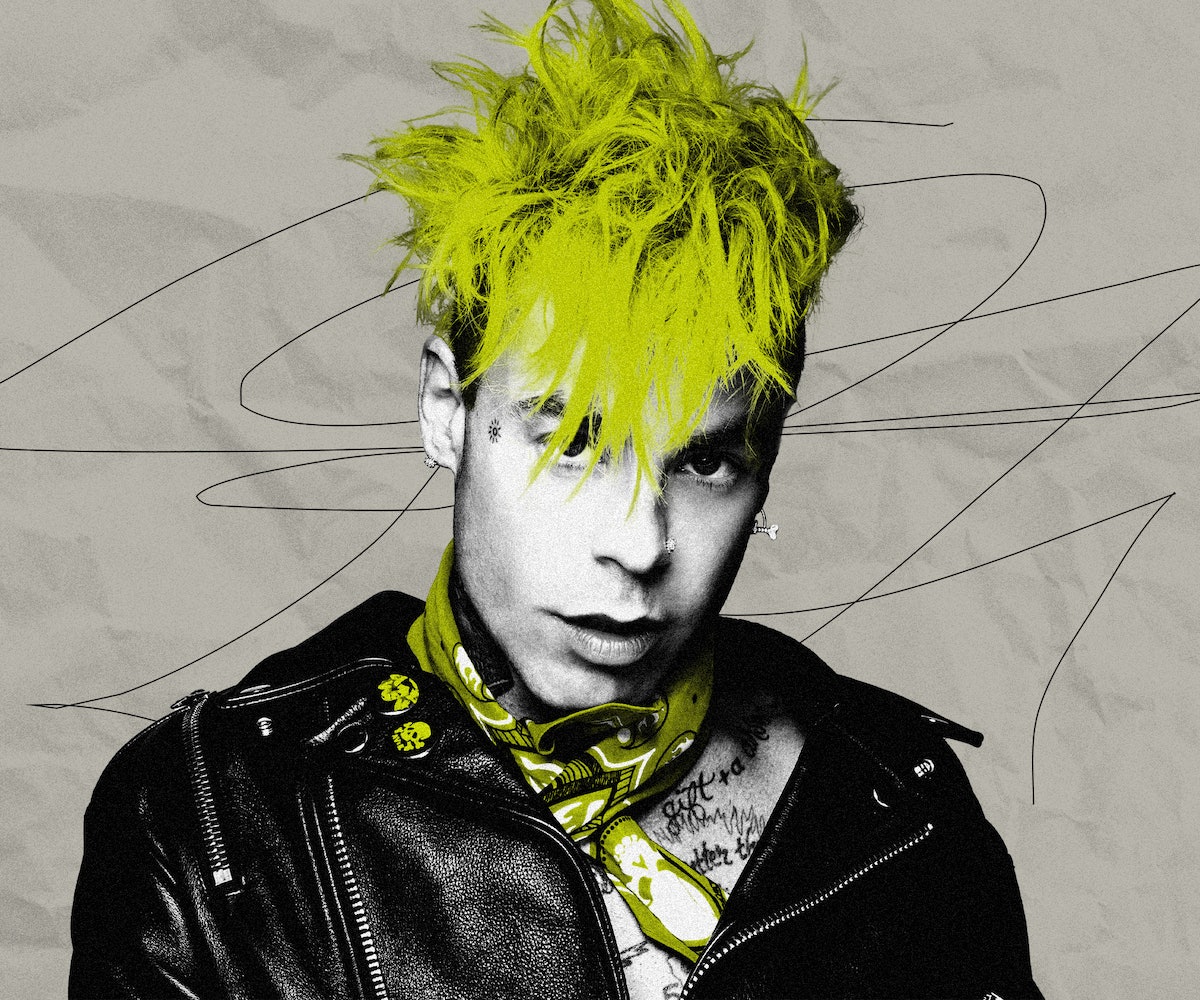 Mod Sun is having a great day — actually, scratch that. He’s having an amazing day.

On the surface it seems like a pretty mundane Thursday afternoon. Sure, the sun is shining in Los Angeles, but it’s not like there’s anything special going on to separate today from tomorrow or any other mid-pandemic day. But that’s Mod Sun’s general mantra at work: any day can be an amazing one if you want it to be.

“A lot of my dreams are coming true,” he explains. “I'm a smart dude in the sense of being aware of how much of a blessing right now is. I’m not missing that at all.” On Friday, the singer will release Internet Killed the Rock Star, his fourth studio album. This new record marks a pivot to pop-punk for the singer, who previously released five mixtapes and three rap albums under a genre he calls “hippie hop.” He’s also written two poetry books, one non-fiction, and recently co-directed best friend and frequent collaborator Machine Gun Kelly’s short film Downfalls High. He’s also also made more than a few headlines thanks, to highly public past personal relationships.

Combined altogether it begs the question: Who exactly is Mod Sun?

On Zoom, he looks like your typical rock star: his hair is a messy lime-green mohawk, he’s covered in tattoos, and wearing a plain white tank top. But it’s clear there’s more at play here; more than once, he’ll pop on a pair of Chanel sunglasses to cover up some budding tears — not that he’s afraid of emotion, be it happy or sad, but it’s just that when Mod Sun feels something, he feels it hard. Rockstars of eras past may have been all sex, drugs, and stoic rock n’roll, but Mod Sun is not into cliches. It’s the opposite really. No matter how you try to neatly define Mod Sun, you can’t.

“First off, I'm a Pisces, like overflowing with emotions and shit, for real,” Mod Sun answers. The question was, “When did you become interested in music?”

Born Derek Smith in a small Minnesota town, Mod Sun was raised by his mother and sister who taught him from an early age that, “Dude, emotions rock.” As a teenager growing up in the suburbs in the early Aughts, naturally he turned to emo music. It was the heyday of Fall Out Boy, Blink-182, and Taking Back Sunday; Mod Sun loved it all: “Like that is f*cking in me, you know what I'm saying?”

When he wasn’t driving around in his car, blasting those records as loud as his stereo would allow, he was leaving school early to watch bands load in at local gigs. “I waited just so I could be like, ‘Dude, you saved my life,’" he recalls. Soon enough, he realized he wanted to be on stage, too. During his freshman year of high school, he joined the post-hardcore band The Semester. For four years, he played as their drummer and de facto “mouthpiece” — “Really, I can f*cking talk your ear off for the next 12 hours if you'd like,” he says for emphasis — as they toured the country. Then, three months after he had graduated high school and was ready to dedicate his life even further to the band, he got a call from the other members. “All three of them were like, ‘Yo, you're not good enough to be in our band anymore,’” he says. He was kicked out, effective immediately.

“That f*cking killed me,” he says. “I had just gone through high school being like, ‘This is my life,’ and then graduated ready to pursue what was my life and then got literally ejected from my dreams, you dig? I went into this very dark state.” From there he discovered Bob Dylan, which was pivotal. By all estimations, Mod Sun was born to be a frontman — for his whole life, he'd been told he couldn’t sing, and therefore, would never be a singer. But here was Dylan, a local hero and a celebrated musician, and yet, “I have never once heard someone say, 'I love Bob Dylan's voice.'" He had something of a revelation in that moment: “Bob Dylan is f*cking rap. Tell me I'm wrong. It's not singing. I heard rap, dude.”

It was in this discovery that Mod Sun was born; “I felt like I could bring something different to the table,” he says of his “huge left turn” in music. “Mod Sun stands for 'movement on dreams, stand under none.' It is all based off of manifestation, the law of attraction. When I found Bob Dylan, coincidentally, at the same time, I found The Secret, and those two things created me.” He found a niche pocket of the rap world he affectionately calls “hippie hop.” Think the sound of hip-hop with the optimism of the cheeriest pop song. “I believe that if you're going to do something in this world, you should be doing something that you're adding to it, something that's missing from it,” he says.

Internet Killed the Rockstar is both completely new and familiar to Mod Sun. Officially, it’s the first rock-centric music he’s released under the name, but the sound has always been at his core. The decision to pivot back to his roots originally began while working on a side project called Hotel Motel with the singer blackbear. Still under the belief that he simply couldn’t sing, he was awestruck by blackbear's voice during recording. “I was watching this kid just paint songs with his voice, and it was so amazing that I was like, ‘Dude, the second he leaves today I'm doing that.’”

So, he opened his mouth and shut the naysayers out. "I think my voice is better than anyone else's on this planet. I swear to God,” he says now. "I said that to myself, ‘That's my favorite voice I've ever heard.’ I don't care how f*cked up that sounds, dude. I worked so hard to believe that.” Armed with this new discovery, he estimates he wrote, conservatively, 1300 songs over the past three years. It took one final push from Kelly, whom he calls “Kells,” to finally get to the place he needed to be to create the album. “He's seen me through everything. We've known each other for a decade,” he says. “He's like, ‘Dude, when I see you, I see art. I want the world to see that. I need you to fall in love with your art more than you ever have.’ I take his opinion highly, so I really did that. I f*cking pushed the limit on finding my sound, and then once I found it, I knew when I was getting somewhere.”

Internet Killed the Rockstar is 11 tracks of the type of pop-punk bliss Mod Sun grew up on, and includes collaborations with the rapper Gashi, who co-wrote a track, and Avril Lavigne, whom he refers to as "the absolute queen." ("A lot of my [teenage] style was based off of her, too," he adds. "I tell her this shit all the time. I fan out. I'll talk up your shit if you don't. I'll remind you how much of an icon you are.") Originally, he considered releasing the album under another name besides Mod Sun. But, once again, Bob Dylan changed his mind. “Bob Dylan was like, ‘Hey, you know what? Everybody loves me for folk. I'm going to drop 'Like a Rolling Stone' and get booed offstage for two years. But I'm not a different person. I'm f*cking Bob Dylan.’ Then, 'Hey, oh, you guys like Rolling Stone now? I'm going to go make a gospel album. But I'm not a different person. I'm still f*cking Bob Dylan. Get with me, and that's it.' So that's who I am. I believe in evolution. I believe in change. I believe in me being able to do this until the day I f*cking die, you know?"

This album is Mod Sun at his deepest core, but for a period of time, he almost lost himself completely. “We didn't even open the whole can of the fact that I had to change my entire f*cking life to get to where I'm at,” he says, reaching for his phone. He pulls up an app that has been tracking his sobriety, waving it towards the screen. “I am 621 days drug and alcohol free,” he shares. “I think that was a big part in me being able to find the person that I am now.”

He doesn’t dwell on it, but acknowledges that there was a time that maybe he wasn’t his best self. The title of the album refers to the halcyon time of real DIY rock, when making music meant a few friends in a room together, no fancy studio or electronics. But you can’t read the title in 2021 without wondering how social media factors into this; once upon a time, rock stars were untouchable golden gods, now they're just a DM away. “I do miss that whole part of mystique and not being able to just say, 'Hey, The Beatles, I f*cking love your music,' and they write back, 'Hey, twist and shout, my brother,’” he says.

Mod Sun has a complicated relationship with the internet. He admits that there was a period during which he was too online, Instagramming almost every aspect of his life; it just so happens to be around the same time he was making headlines for relationships with the likes of Bella Thorne and Tana Mongeau, making it seem all that more microscopic. “I got so lost,” he says. “I was oversharing ... I'm not proud of being such an open book at times now. That's kind of when Kels was telling me, ‘You're showing the world so much of a different person.’ We have a joke now — I called myself Model Sun because of that shit. I was looking into the camera, trying to look pretty for the internet and shit, and be larger than life. I've found so much more beauty out of just pulling back on all that now.”

When he considers where he’s at today, he views himself through the lens of his past and future selves. "The 16-year-old me is just going so crazy, and then the future me is so proud. The younger me is like, 'I cannot believe this.' And future me is looking at me like, ‘Thank you very much for doing what you did.’” He thinks about his future, in general, a lot. “I've already scheduled a lot of my 50s because I'm going to be one of the cool old people,” he says. That time, he continues, will be dedicated to directing, which he’s already started dabbling in thanks to Downfalls High. He and Kelly also have a full-feature script ready to go.

“Directing is going to be, I think, probably one of my biggest things at the end of the day,” he says. “That's my main thing that I'm focused on. Then me and Machine Gun Kelly have a clothing line dropping called No Safety. It was all over Downfalls High. Finally getting the clothing started is going to be amazing.” He’ll also probably do more writing, he notes.

But the list isn’t done there: “Then, dude, just really having an amazing personal life and growing up and staying young, you know?” he continues. “I want positivity to be popular, man, because it's so easy to be like, ‘I'm the depressed, sad kid,’ and be popping [online]. It's so much harder to be like, ‘Life is all good.’”

He suggest an exercise in positivity before we both log off. “What if we both stop and look at each other right now and go like this,” he leans towards the camera with a giant, goofy smile on his face. “Smile with me!”

“That just felt better, did it not?”

“Dude, f*cking fight for happiness,” he says. “It's worth fighting for, you know?”