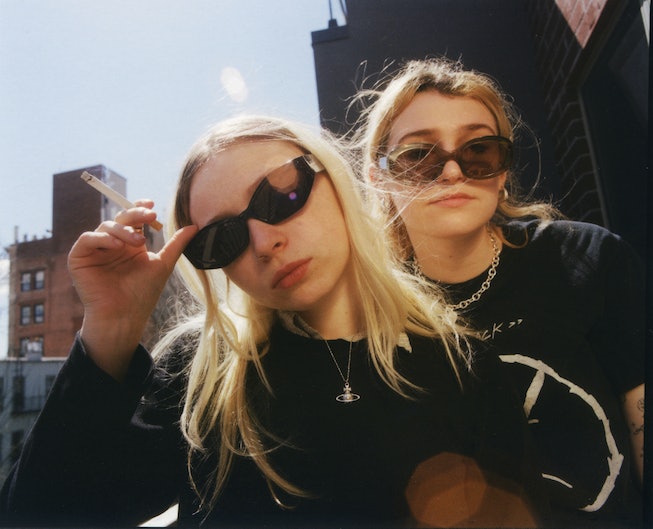 The idea that getting spurned can ultimately be good for you is a cliche that rarely feels true in the moment because, well, rejection sucks. For Momma, the buzzy New York-by-way-of-California indie trio, record labels were fawning over them, taking them out for drinks, heaping praise on their 2020 concept album Two of Me, and generally anointing them as The Next Big Thing. But not everyone who offers kind words is willing to back that up with a contract, and the members of Momma found themselves dealing with a plurality of passes.

“When we got rejected by labels, I remember we were just saying, ‘All we can do is make the best record possible,’” Allegra Weingarten recalls.

And that’s exactly what they did. Their third album, Household Name, is easily the group’s best. Due out July 1 via indie powerhouse Polyvinyl, the record sees Momma wrestling with what it would mean to be capital-F famous today atop hazy, reverberating guitar chords that broaden their grunge-tinged sound without dulling its edges.

Composed of 24-year-old Weingarten and 23-year-olds Etta Friedman and Aron Kobayashi Ritch, Momma initially began as Friedman’s project. Weingarten joined the fold when the pair met during high school and their sound began to expand, first with 2018’s Interloper, and then Two of Me. The release of Household Name coincides with the start of a new phase for the band. Friedman and Weingarten kept the group together while they were in college at Brooklyn’s Pratt Institute and New Orleans’ Tulane University, respectively, and when we speak, it’s the day before Friedman’s graduation. The pair are eager to make music their foremost priority now that they are both done with school.

“I think we’re also our own worst enemy and really hard on ourselves and think, ‘Could this f*cking flop?’” Friedman says. “But ultimately, I’m living the dream life of what I wanted when I was 12 of making music, [and] people being receptive enough to want to come see it.”

Inspired by albums like Nirvana’s Nevermind, which brought its makers life-changing notoriety, the band uses much of Household Name to explore their own feelings on what success means, and how it could change Momma for better and worse. Album opener “Rip Off” is their wry rebuke of the A&Rs who didn’t follow through on their initial interest (“You got my picture cause it’s hard to escape/ They’ll know my name in every home across the States”). “Rockstar” pokes fun at their longtime search for a drummer, and makes Momma seem like the house act at a club owned by David Lynch (“The barback is our singer/ The last one quit the band/ A real heavy drinker/ He karaokes Rocket Man”). “No Stage” juxtaposes public adoration with private loneliness the same way so many great music biopics do.

In addition to records like Nevermind and constant influences like The Breeders, Momma also drew on one particularly exuberant source of inspiration: the Tenacious D comedy rock musical The Pick of Destiny, in which Jack Black and Kyle Gass play underachieving musicians seeking a mystical guitar pick used by some of rock’s greats. “It's about making it big and paying your rent at the same time. That’s just a relatable feat for an artist, I feel like,” Friedman says with a laugh.

In some ways, Household Name is wistful for a kind of fame that doesn’t seem like it exists anymore. Momma is great at conjuring up a world pre-internet, or at least one outside of the 24/7 online anxiety vortex. Their last record, Two of Me, was largely inspired by Yerington, a 3000-person town in western Nevada where Friedman has family. That kind of local watering hole imagery is also present on Momma’s new album, even as they acknowledge that era — and its devil-may-care-rock-stardom — is far removed from their reality as up-and-coming musicians in today’s record industry.

“That rock ‘n roll mindset of ‘I don’t give a f*ck’ doesn’t exist anymore,” Weingarten says. “You have to give a f*ck. If this was 1991, I would name drop the label that I was talking about in ‘Rip Off,’ but you can’t do that [now]. There’s a set of manners that you have to have as an indie musician, because there are so many people trying to do it.”

Momma figures to be one of the year’s clear indie rock risers.

The moments on Household Name less concerned with the high highs and low lows of musical success are no less compelling, as each of the band’s primary songwriters shares intimately with a newfound sense of refinement. Fourth single “Lucky” finds Friedman contemplating the distance between themselves and their partner through the changing topography that separates them. After spending time together in small town Connecticut, Friedman found themselves back in L.A. pondering their cross-country divide. (“My highway hills could reach the east/ If I drive in four days' time/ I’d pick you up from hometown streets/ Buckle up, I’ll be there,” they sing.)

“Lucky” is one of several tracks on Household Name that reaches a new level of sonic scale for the band, which is fitting since this is their first LP recorded in a full studio. “Brave,” with its tightly coiled chords and bursting hook, and propulsive lead single “Speeding 72” fall into the same category. Sometimes, it can take an album or two for young indie artists to really settle in and make use of their newfound resources, but thanks to Ritch’s deft production touch and Weingarten and Friedman’s songwriting acumen, Momma sounds unambiguously ready for primetime.

With support slots for Snail Mail and a headlining tour of their own later this year, Momma figures to be one of the year’s clear indie rock risers. It’s a good thing they got their “holy shit” moment out of the way when they wrapped up a string of U.K. shows in mid-May.

“Etta and I had this moment when we landed in Manchester,” Weingarten says. “I was tripping out because I was like ‘Damn, those voice memos that we sent to each other in 2016, my first year of college, have brought us to f*cking Manchester. That’s crazy.’ It’s really cute.”

Momma’s Household Name is out 7/1 via Polyvinyl.