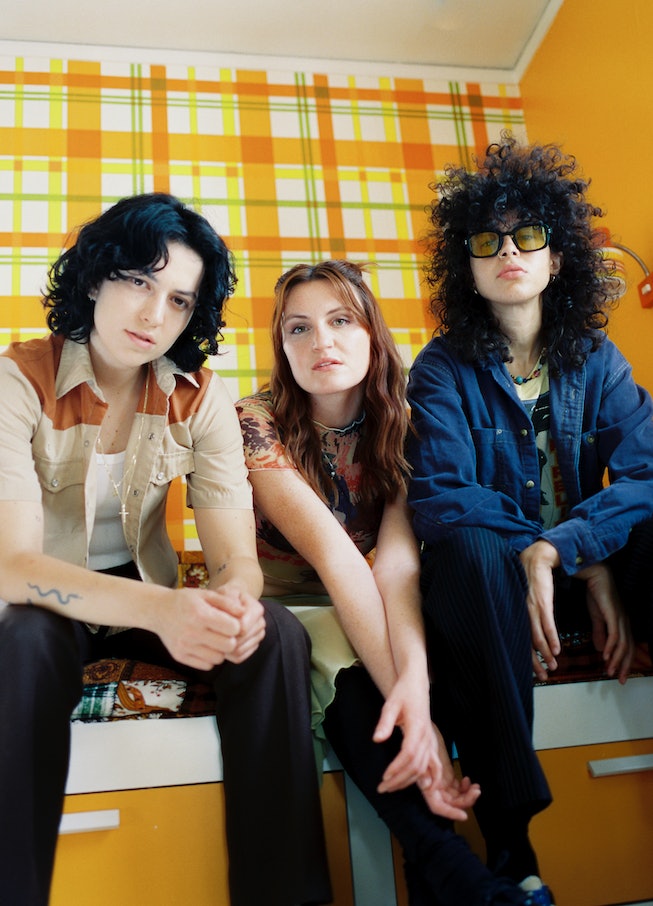 This summer is going to belong to MUNA. The indie pop band’s new self-titled album, out June 24, will be everywhere, on repeat, and absolutely no skips are allowed. If you’re not already part of the MUNA Celibacy Club (one of MUNA’s many unofficial stan names), you’re about to be — though that name may not be the most fitting for this new album and era, the band still shouts out its day ones. “That [fan name] was probably more apt for Saves the World,” lead singer Katie Gavin says about their tender, queer 2019 album. “We’re slowly moving away from celibacy.”

MUNA is much hornier than its predecessor (though rest assured, there is still plenty of yearning). Its debut single, “Silk Chiffon,” which features friend, collaborator, and label boss Phoebe Bridgers, kicks off the album, a precedent for the band’s sonic pivot and freedom to play. Over its 11 tracks, this album has everything: Frou Frou influences, subtle nods to “Crew Love” by Drake (rapper and self-proclaimed lesbian), hints of Lilith Fair (or “2000s singer-songwriter energy,” according to instrumentalist and producer Naomi McPherson), and of course, that “old” MUNA flair, not yet retired, just evolved.

With sonic influences like Robyn, Phil Collins, and The Cranberries, the album taps into a sweet, albeit wide-ranging nostalgia. “‘Handle Me’ was definitely a sexy early 2000s movie. This would be in The O.C. ... during a make-out scene on early L Word,” says McPherson. (One could easily see a Shane “walk of shame” scene to that song — Ilene Chaiken, take notes.) The album wasn’t just birthed by throwbacks; it holds contemporary references as well. “I’m sprinkling in Taylor Swift whenever I can,” says Gavin. The MUNA experience is such a ride; fun and wild and silly and sad and a little all over the place — but what’s more queer than that? (The pop band largely identifies as queer, with two members who are nonbinary.) “We were joking in an interview yesterday that Jo and I said that when we finished this album, ‘Well, I don’t really know what we made, but I hope you guys like it!’” Gavin says.

The album is guttural, like a good scream-cry. It demands attention and to be listened to on a loop. You can’t quite sit still hearing tracks like “Runner’s High” or “Solid.” So many songs on this album feel like an experience you want to share — on a dancefloor, on a long drive, in a bedroom. MUNA, though exceedingly more upbeat than Saves the World, doesn’t feel like a total diversion from their more melancholy roots but rather a testament to the people they’re evolving into, and the music that reflects that transition. “Every album is a roller-coaster ride emotionally. This maybe feels like we’re just a little bit older on the ride, that’s all,” says guitarist Josette Maskin.

When we speak over Zoom on a Thursday morning in April, they are hot off the heels of the “Kind of Girl” music video release as well as their tour announcement, where they unexpectedly (only to them) sold out three different NYC shows. It was a capital-B Big moment for the indie band. “We did have a lot of tearful conversations the weekend that our tour went on sale because there was this feeling... How would I describe it?” says Gavin. “It was an exhale. We didn’t know that we were holding our breath in a way. To be honest with you, I think we didn’t really know how badly we wanted and needed to have a moment like that, where it really feels like they like us.”

Since forming in 2015, MUNA has been touring for roughly seven years. Back in 2017, they played a venue that they were sure to sell out. It didn’t. And although the show went smoothly, it’s only human to come away with a slightly bruised ego. “I think we still feel like the same people we were then, afraid that when we try to shoot for bigger things, that we won’t be able to back it up. We were pleasantly surprised to find out that’s not true anymore,” McPherson says.

Adds Gavin, “I think that’s an experience for a lot of people who are marginalized. You have this experience of being like, ‘I think what I’m doing is good, but is it not good?’” A large part of being queer is constantly fighting the urge to feel less than, even when you’re exceptional. And this album and this band are just that. The occasional self-doubt aside, I think they know.

If you’re lucky enough to catch them live, first, please wear your mask, but second, you’re in for a treat. Despite the ascending COVID numbers that leave the band unsettled (they’ve been consistently vocal about looking out for their own and their fans’ safety), touring is something they all look forward to. They don’t take this time with their fans or each other for granted. “The best part about touring is connecting with all of our very lovely fans who are so thoughtful and caring and sing so loud. And you know what? Most of them wear masks,” McPherson shares proudly.

Seeing MUNA live is a scene. Katie leaves it all on the stage and then some; Naomi is a powerhouse whose voice sounds like butter; watching Josette play guitar will make you blush. Even Geo, their bassist, and his Wreck-It Ralph arms, will have you losing your mind. Their synergy onstage is a spectacle, one that radiates with a kind of comfort that can only come with a lot of trust. “We’re all so in love. We’re all such good homies and we love hanging out so much,” McPherson says. They all chime in with stories of watching Survivor, hanging up on their girlfriends to go see what everyone is laughing about, and the boys in the band they jokingly refer to as their husbands, and there’s even the occasional impromptu fashion show while on tour (you just have to watch the TikTok).

But it’s not all fun and games for the group. Touring isn’t easy on the body. To them, it feels comparable to running a marathon. “You have to think a bit about it as an athletic endeavor. Your body’s just going through a lot of chemical surges, and you’re traveling constantly. Our show, we’re jumping for 75 minutes a night,” Gavin says. The band is particular about its performance and protective of its art and the way it’s put on display, more so now than ever. “I think as we’ve gotten older, we’ve gotten a lot more serious about how the show goes,” adds McPherson. “Not that we didn’t in the past, but we now have the infrastructure that allows us to put on a really seamless, good show.”

MUNA recently signed with Phoebe Bridgers’ Saddest Factory Records. One small step for band, one big step for gay-kind. The relationship was kismet. Though unplanned at the time when Bridgers kicked off the label (MUNA was already signed to RCA), they saw the vision even then. After a few DMs back and forth and a casual run-in, Bridgers told the band, “You guys would be the dream act to be able to sign.” And that? It’s the power of manifestation. Soon after, MUNA was dropped from RCA, and while they assure me there’s no bad blood, it’s easy to see how symbiotic this newfound partnership is.

“It’s funny because it’s not that MUNA itself is a consistent variable. Every album cycle sees a lot of growth. I see it in Naomi and Josette. When I look at this album cycle, I do see a heightened ability on our part to feel out what would be fun for us. Yeah, we’ve changed labels, but we’ve also changed too,” Gavin says. This MUNA is not the same band as MUNA circa 2015, and it shouldn’t be. Like all of us, we win and lose, we trial and error, and we mature into the people we’re hopefully meant to be. This album is a reflection of that journey. MUNA is settling into new skin.