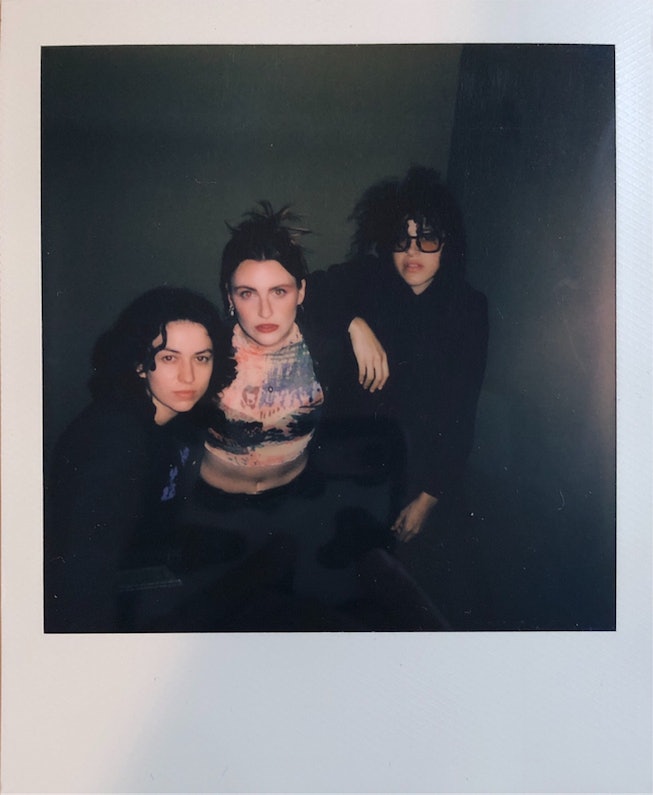 There’s still three hours before MUNA’s set to hit the stage, but a healthy line stretching down the street and around the corner has already formed in front of New York’s Bowery Ballroom. Backstage in front of the green room (a door painted with a lopsided star at the end of a short all-brown corridor), the three members of the Los Angeles pop band, Katie Gavin, Naomi McPherson, and Josette Maskin, pose tiredly for polaroids, wordlessly shifting positions before each shot — Gavin in the middle, then McPherson, and then maybe a shot on the ladder in the corner — like the pros they are at getting their photo taken.

It's nearly midnight and the end of a very long day for the trio. Earlier that afternoon, they were bouncing, running, and head-banging on stage in a rousing set at New York City’s Governors Ball Festival. Now, they're charging up to deliver the same level of energy for their post-fest show — and their first headlining gig in nearly two years.

“We were dying, actually, at that point,” McPherson admits over the phone a few days after their Bowery show. “But the show in New York went really well. You forget that people feel connected to what you're doing when you just live in a little bit of a bubble. It's cool to play and someone's singing the words with you and you get to experience that together. It's a very special communion.”

Throughout September, MUNA has been on the road again for the first time since since lockdowns took place. It’s been a restorative month of reacquainting themselves with their loyal fanbase, and the thrill of performing live again, as they headlined on two major tours for Phoebe Bridgers, and Jack Antonoff’s Bleachers.

Over the past two years, the audience for MUNA’s fervent brand of arena-sized pop has only grown, most recently due to their signing on Bridgers’ highly-visible label, Saddest Factory in May, and the release of their first single since 2019, “Silk Chiffon,” also with Bridgers. With its bright sound, and Like A Cheerleader-inspired music video, the track has become a breakout hit among the queer community online, and in-person, as the bright and bubbly track captures the pure and uncomplicated thrill of a new, and very gay, crush. There’s a notable, tonal shift from the more serious themes of regret, insecurity, and break-ups on their previous two albums, 2017’s About U, and 2019’s Saves The World — and it’s hard not to see the song, coupled with their signing to Saddest Factory, as the bright beginnings of a brand new era for the band.

“[‘Silk Chiffon’] just felt like a wholesome love song, and we don't really have that,” McPherson says of the track, which was written by Gavin in 2019, and finished by the band in late 2020.

“There was so much emotional labor put into [our last record] that we're just at a different point in our lives where I think we feel that we're allowed to enjoy a little bit more,” Maskin adds. “We're handing in the whips and chains, a little bit.”

According to Gavin, MUNA’s signing to Saddest Factory was the best outcome out of an unfortunate situation: being dropped by their major previous label RCA during the pandemic.

“We were gently released back into the void and I think that it was a moment in the pandemic where a lot of people were taking a breath and thinking about what they do on a deeper level, and we were really doing that as a band,” Gavin says. “We make pop music, but we also have this way of doing it that's incredibly indie or DIY in nature. We knew Phoebe had started a label, we knew that she was a fan, and we also love her music and love the way that she works. It just kind of all came together in a way that felt really meant to be.”

“We're handing in the whips and chains, a little bit.”

And it seems the changes are already paying off. In August, the group announced another headlining slot in none other than Kacey Musgraves’s highly-anticipated Star-Crossed tour in 2022 — a personal, dream-come-true achievement for the trio.

“The Kacey tour was something that really just convinced us that our powers of manifestation are stronger than we knew and that we really need to take them more seriously because that's like the only thing we've been saying for a really long time,” McPherson says. “If anybody asked us who we wanted to open for, it's Kacey, baby.”

Before that, the band will be taking a much-needed break. Perhaps, they’ll even finish up the upcoming project they’ve been working on. “It is not done,” McPherson says. “But [“Silk Chiffon”] will be a part of it for sure and we're gonna head home tomorrow and get cracking on finishing all the other stuff that we're working on, and music next year.”

By then, you better believe they’ll be back to jumping, shouting and giving it their all on stage in a live show that’s ripe for a headlining slot on Mount Olympus, Gavin jokes. “You do kind of feel a little bit like a f*cking demigod.”