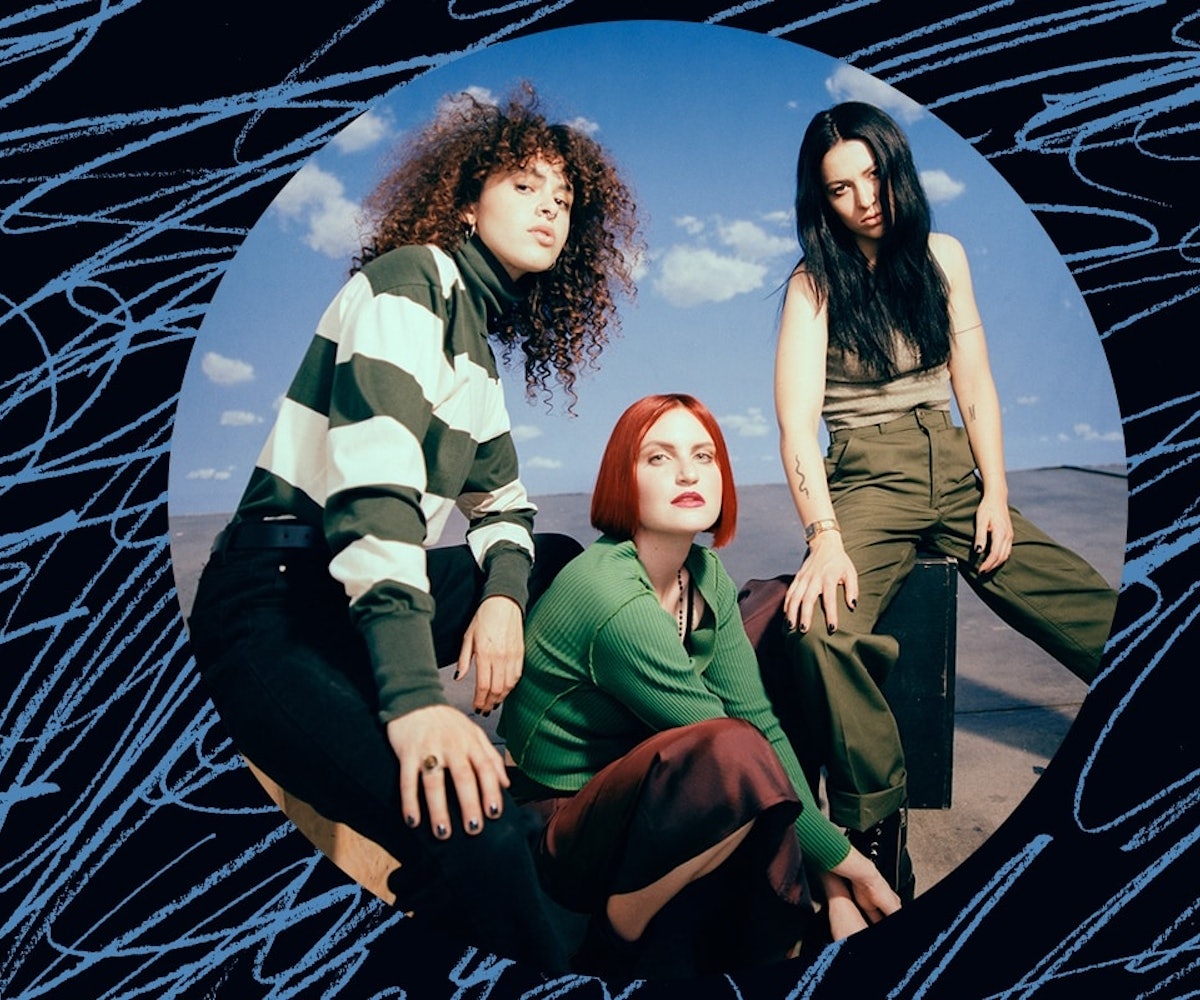 After charging out of the gate and becoming the young, queer icons young millennials and Gen Z-ers deserve in the music industry, Muna needed to learn how to reflect that radical love back upon themselves. The L.A.-based electro-pop trio first won over a sizable fan base with their safe-space anthem "I Know A Place," released just after the Pulse Nightclub massacre, and went on to make their presence and message loud and clear with every performance. But to continue sending out these songs of radical love, they needed a moment with themselves. That, and they needed the right creative inspiration to come along. And so they spent two years breathing; waking up and looking at themselves in the mirror and learning to love what they saw, finding inner peace, despite the world outside becoming more volatile.

Today, singer Katie Gavin, alongside guitarists Josette Maskin and Naomi McPherson, return with the lead single off of their sophomore album Saves the World. Earlier this week, the trio sat down in the NYLON office to share what brought them to this very moment, and what is yet to come.

"We've all been discussing—with trying to improve ourselves as people—how, if we all take responsibility for ourselves and our feelings and our own personal growth, the world would be a better place," Maskin tells me, emphasizing the way the political is personal. "How could we openly have a political conversation with the other side if we're not willing to have a conversation with ourselves?"

"...If we all take responsibility for ourselves and our feelings and our own personal growth, the world would be a better place."

Every member of the group, Gavin says, was going through a period of self-reflection, and had "entered a space that was very much questioning of our own self-worth individually." Gavin explains, "While I was trying to be this empowered frontwoman, there was something inside me that was saying, 'You don't really deserve everything that's happening.' And I couldn't hide from it when we were off-cycle, so it was the voices in my head telling me like, You don't have anything left to say. Who do you think you are trying to help people and save the world with pop music?"

When the song "Number One Fan" first came to Gavin, she was driving in her car, and had reached a sort of milestone in her own application of self-love, where she could recognize her own growth. She adds, "Writing a song and making it our first single was an amazing way to be accountable because now it's on the record. You really have to live it if you're singing about it."

And they hope that, as their fans are singing along, they'll get the same boost of self-confidence that Muna did. "We're so grateful to have such a nice, supportive, loving community of fans who call us iconic, and I hope they look in the mirror and call themselves iconic," McPherson added.

For the music video, released in tandem with the single, Muna was inspired by filmmaker Wong Kar-wai's '90s film aesthetics, watching classics like Fallen Angel to create the world their visuals would live in. It was McPherson who first had the idea to make a campy, neo-noir video in which Gavin both played herself and her own stalker-fan. The band points out it does sort of share similarities to Us, as well as Christopher Walken's "swaggy" dance moves in Fatboy Slim's "Weapon of Choice" video.

Saves the World, due out in September, encapsulates the "full range of emotions," Gavin says, and is sure to show you a new side of Muna. "We were trying to take up as much space, sonically," Maskin said, and with that in mind, they had to shed any insecurities that they'd be defying what critics and fans expected of them. "If [a song] wants to be a four on the floor, disco club banger, let it be that and do that to the best of our ability," McPherson added, "but if another one wants to be a late-'90s, early-'00s acoustic guitar and pop-rock, just make it sound awesome. That's the only goal."

And it still traces back to all the heavy lifting put into their own self-care and self-love; McPherson admits, "I feel a deeper level of acceptance for my queer identity, and I feel a deeper level of acceptance for my sensitivity as a person. I think, I for a long time had kind of like a rough exterior and wanting to kind of see myself as like a hard-core person." And she ties that straight to the final product Muna came up with for Saves the World. "When you're talking about the sonic vastness of the record, it ties to accepting the full range of emotions that I actually feel if I just live in reality and don't check out."

Aside from, you know, saving the world with their pop music, Muna didn't have lofty goals to share with their album. They'd already learned plenty about themselves in the process of writing and recording and left better people for it. Now, they just want you to buy the album, 12 amazing songs, "so that we can eventually upgrade the internet at our house," McPherson half-jokes. "Our goal is to be able to afford internet that actually allows us to stream shows on more than one device." I think Saves The World will allow at least that.