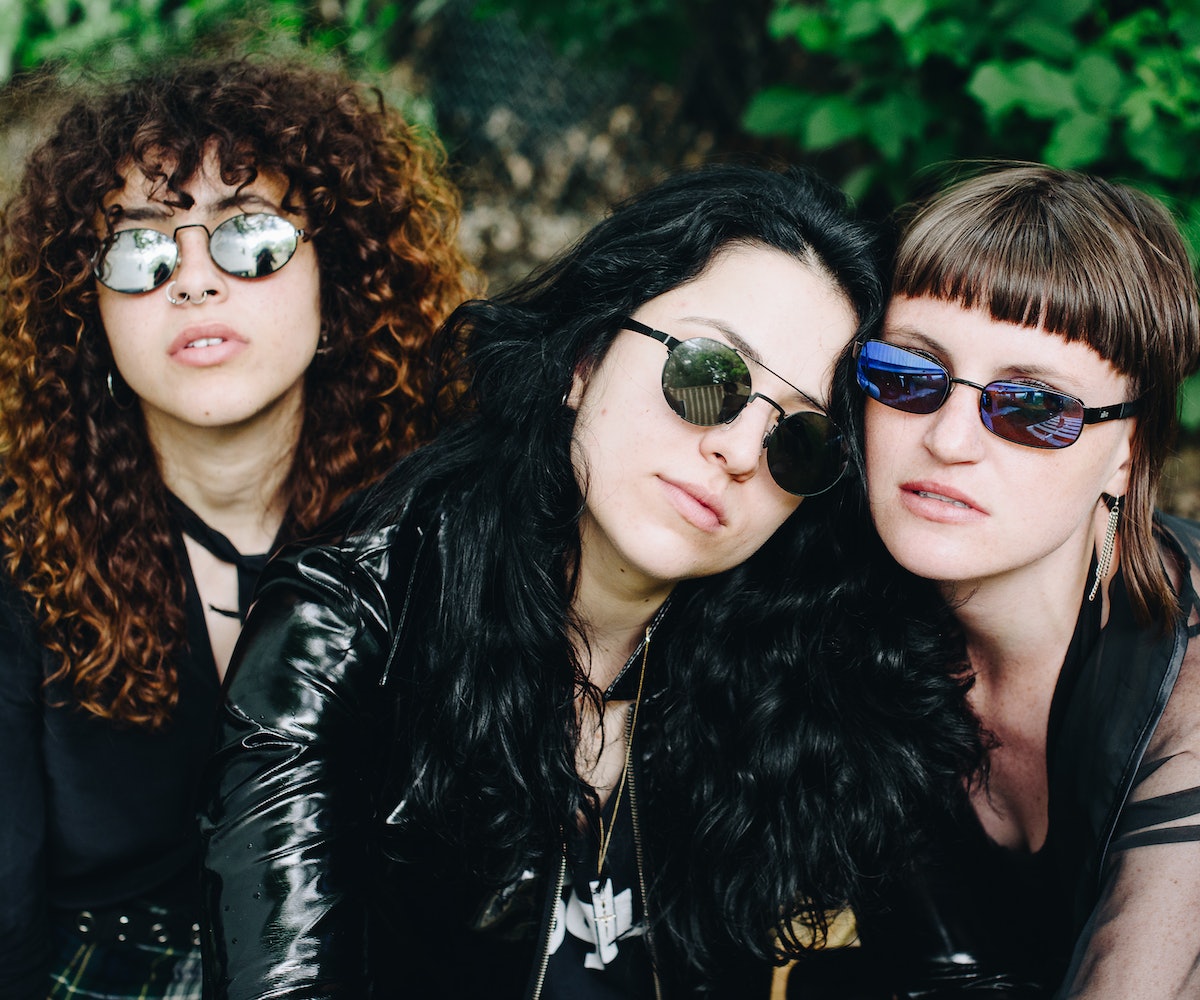 "Hey! I recognize you from Twitter," MUNA's singer, Katie Gavin, says when we met earlier this month. I blush. In that instant, my feeling that MUNA is made up of three of the coolest, most relatable individuals was confirmed. For MUNA is a band that simply wants to relate with its audience on a personal level, one that's free of shame, embarrassment, and judgment. Their stellar debut album, this past February's About U, is rife with as many self-empowerment anthems as it is with too-close-to-home breakup songs that come to life during their electrifying live shows. They're activists, outspoken in their politics and unabashedly queer. It's their confidence and gentle approach to fame that made them the ones to watch last year and now, with a slew of dates lined up opening for Harry Styles later this year, bona fide icons in the making.

"We don't ever want to get to a point where we don't feel like we're showing all the sides of ourselves to each other," Naomi McPherson, MUNA's guitarist, says. "We want to feel like we're fully expressing ourselves to our audience because we know that there's an unconditional thing going on where if you feel full of doubt or you feel full of resentment, the most important thing is you feeling empowered and safe enough to get it out there because we depend on each other." One need not look much further than "I Know A Place," a lead single off About U released after the Pulse nightclub massacre in Orlando, Florida, that left 49 people, many of whom identified as LGBTQ, dead. It's a song of empowerment and escape that celebrates diversity and encourages inclusivity. It's an anthem, through and through.

Together, Gavin, McPherson, and Josette Maskin work to support and advocate for marginalized groups. They aren't timid about their beliefs and values. Hell, they wore DIY shirts that said "Fuck Trump" during one of their first-ever festival gigs. They proudly joined the Women's March in January. They understand the platform they have and will ruffle some feathers if need be. But their outspokenness isn't performative. It comes from a deep pride for what they do, the community of weirdos they've helped foster and support, and, most importantly, themselves.

"I feel like we've found a sense of freedom that I lost for a really long time," McPherson tells me. Maskin adds, "It makes me proud to be accepted by them, that they will have me as their partner." Their bond is both inspirational and aspirational. It's rich, unique, and contagious. You feel their love for one another seeing them live; you hear it in their lyrics, as pained as they can be; you experience it through their fearless take on moody, palpable pop. You feel championed by them.

The same way RuPaul encourages his fans to love themselves, MUNA does so by loving one another. "There's this really strict separation between artist and fan," Maskin says. "We forget the fact that everybody has creative impulses within them and has the potential for some type of higher thing to pass through them." Music, for MUNA, isn't about the fame, it's about the community. "Part of our long-term goal is to allow people to see and experience that creativity, to know that what it means to be alive is to create something—not just so you can sell it, but so you can express yourself and find a truth." Connect. That's their MO, and despite it being easier than ever to do so over social media, true connection is hard to come by. It is, however, found within their world.

"I'm proud of what we've accomplished by just sticking to our ideals, whether they're popular or not," Maskin says, "because we know we're providing for a big extended group of friends, whether we know them or not. That's what we want. We want to provide for them." What more could a queer icon do? If queer icons are, as I've written before, "a dream home," MUNA is making those dreams into a reality. They notice, they care, and will maybe—just maybe—recognize you because you've tweeted at them from time to time.