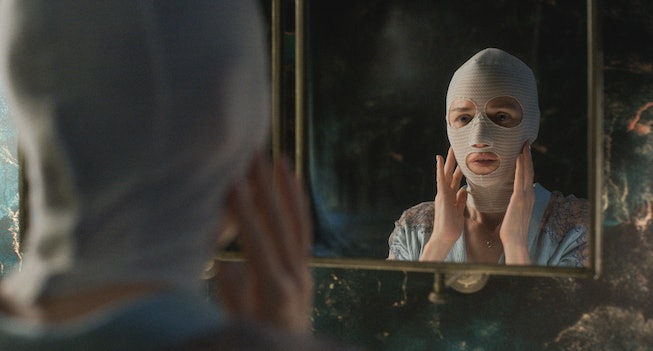 Naomi Watts stars as a masked woman in Amazon’s new horror flick, Goodnight Mommy. The upcoming film is a remake of an 2014 Austrian psychological thriller of the same name.

Goodnight Mommy follows two young boys (played by Big Little Lies stars Cameron and Nicholas Crovetti) who visit their mother's country home. When they arrive, they’re greeted by a woman whose face is wrapped in bandages, which she explains is the result of recent cosmetic surgery. In the first trailer for the film, Watts says, “I hate that you have to see me like this, but there’s nothing to be afraid of.”

The boys initially go along with it, but as their trip progresses their mother begins acting more strangely. She sets strict house rules, forbids them from entering her bedroom or the barn, smokes alone in her bathroom, and destroys a picture they drew for her. When they’re unable to shake the feeling that something’s off, both children question who the woman is behind the mask. “Don’t you think something’s different?” one brother asks. “I don’t think that’s our mother,” the other responds.

Goodnight Mommy was directed by Matt Sobel, written by Kyle Warren, and produced by V.J Guibal, Nicolas Brigaud-Robert, Joshua Astrachan, and David Kaplan. The reboot premieres on September 16th on Amazon Prime. Until then, check out the eerie trailer below: