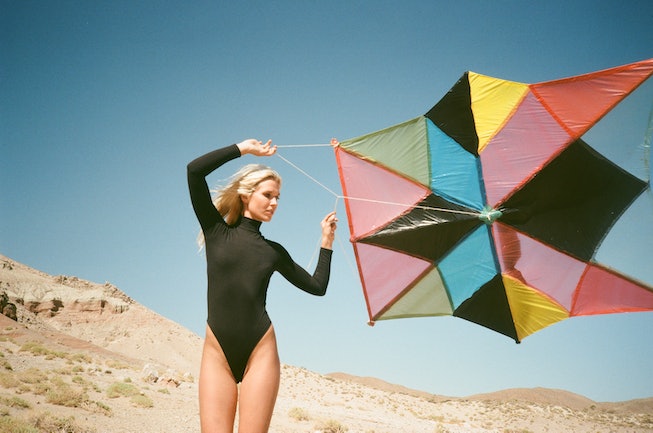 Natalie Bergman’s “Paint The Rain” is the sweetest moment of her debut album Mercy, out now. Though lyrically it is quite a sad song about the dissolution of a relationship, sonically, it is bursting with radiant beams of sun, thanks to its steady, dreamy ‘70s gospel sound.

The record is Bergman’s first as a solo artist, but she’s released three others previously as part of her more well-known project, Wild Belle, formed with her brother, Elliot. In 2019, they lost their dad in a car accident, a tragedy that sparked the inception of Mercy for Bergman. This beautiful set of songs draws on her utterly hypnotizing view of gospel, one that is hazy, delirious, and glowing in the soul. On “Paint The Rain,” it’s used to bring a song about falling apart into a realm of hope, where her chanting “You paint the rain!” on its outro feels almost redemptive.

On Friday, NYLON premieres the video for “Paint The Rain,” which was shot in the deserts of Los Angeles. It mirrors Bergman’s own retreat to a desert monastery in New Mexico when she began to create the album and process her own grief. In the black-and-white stop-motion style video, she plays with blocks, ladders, kites and other various objects up in the sandy mountains; it’s a simultaneously peaceful and surreal experience.

Watch it below, and read on to learn more about Bergman, kites, and the hope-bringing powers of gospel music.

I have multiple piles of cut-out hands, teeth, eyes, shapes, and patterns taking up my living room floor. I just made a stop-motion film for my friends at Arts of Life, which is a non-profit that provides artists with intellectual and developmental disabilities a collective space to expand their practice. I recently commissioned a piece by one of their artists Jean Wilson. It’s called “Stereo Rock." It’s an insanely cool painting of a stereo. She’s an incredible painter and she often paints on cardboard, which is one of my favorite surfaces to work on.

Tell me a bit about "Paint The Rain" — how does this song fit in the greater narrative arc of Mercy for you?

After writing the bulk of Mercy, I left Los Angeles for six months and went back to the woods where I grew up. I was making a lot of art. Box sculptures and blue paintings. I was driving to get paint one morning and I hit an Indigo Bunting with my pickup truck. A little blue songbird. It was very unsettling and sad and I pulled over to cry for a few moments. I turned around and went home, and that same morning I wrote “Paint The Rain.” Although the lyrics don’t have anything to do with that poor little songbird, it does relate to the death of a relationship, and I was certainly feeling very blue during that time.

How was the experience of shooting this video in the desert — to return to the same environment of when you were staying at the monastery?

Los Angeles desert in the spring is entirely different from the New Mexico desert in the dead of winter. The video shoot was guerrilla, which is typical for most of my films, but the elements in the desert are so much greater than us…the sun and the wind are mighty and will eat you alive! My box sculptures became tumbleweeds and the kites had a mind of their own. It was an experience nonetheless, and I have a pretty solid crew of my own tumbleweeds that will follow me on any adventure.

You sing about building and flying a kite in "Paint The Rain.”

I’ve built a few kites in the last year and only one has successfully flown. It makes a very brief cameo in this video. There was a Kite Festival in the 1950s that was held by students at School of the Art Institute of Chicago, and I have dreamed about hosting a kite festival of my own over the summer.

You've spoken about the hope-bringing power of gospel music, and that Mercy is your take on gospel.

I like the tradition of gospel music in churches because it brings people together to sing. It’s a community-based music. I hope to bring people together with my own songs and spread a little bit of the gospel news. We made a hymnal for my record and my church in Chicago will be singing “I Will Praise You” this Sunday. Excited to hear it.

Besides this record, what else brings you hope, comfort, and healing these days?

I am going to the mountains this weekend. It just so happens I’ll be accompanied by the subject of this song. Love always finds its way back to you.