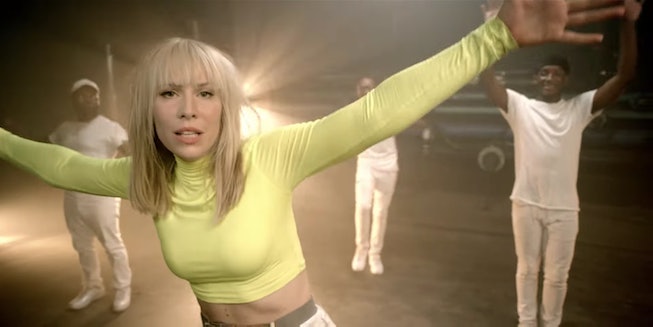 Earlier this year, Natasha Bedingfield’s 2004 hit “Unwritten” experienced an unexpected, but very welcome, resurgence. On TikTok, a viral dance challenge set to a sped-up, trapified, and remixed version of the sunny early-aughts anthem emerged, which led to teens, young adults, and people from all over busting out in synchronized choreography (flash mob-style) to the song. Eventually, Bedingfield herself shared her own iconic attempt of the trend.

“I mean, the first thing I thought was, ‘Wow’,” the singer said of the trend to NYLON in an April interview. “The [@rony_boyy] dance is so good. They're proper choreographers, that's real, that's not an ordinary TikTok dance. So I thought that was cool.”

Though the 39-year-old star had only interacted with the dance challenge creator, TikToker @rony_boyy, and remix creators, @prodby_danny, @therealshawnp, and @escoup, via TikTok at the time of our interview, they’ve all since met up in person. And now, Bedingfield has recruited the TikTokers to be a part of her new music video “Lighthearted,” premiering exclusively on NYLON below.

The loosie, released by Bedingfield at the end of June, is a twinkling, guitar-laced pop song about still choosing happiness even after a period of adversity, and is her first major solo release since her 2019 album Roll With Me. In its video, directed by Dan Epand, Rony and his crew of dancers dressed in all white descend on a downtrodden Bedingfield and help her dance again.

“[Rony] and his crew came out to L.A. to teach me the [‘Unwritten’] dance, because I can’t figure it out, and they ended up making a dance to my new song!” Bedingfield tells NYLON. “That inspired me to make a music video, with them as the band. True to the title, the song brings that carefree feeling that we all need after the heaviness we’ve all been through. TikTok is bringing lightheartedness to all. And bringing unexpected connections and joy after a hard time as things start to open up.”

While the majority of TikTokers who get a chance to appear in a star’s video only get a few seconds of screen time, Rony and his crew, Da Mob House, are essential and arguably the stars of the visual, as Bedingfield steps aside to let them do their thing. The friendship and respect between the two parties feels genuine and mutually shared — a chemistry that director Epand also notes.

“When I met Natasha and the dancers, the first thing that struck me was their chemistry,” he tells NYLON. “I had little interest in making a traditional ‘dance’ music video. What was exciting was to highlight this relationship. There is a catharsis that comes from community, especially in times of adversity, and it just felt like Natasha and Da Mob House guys were lifting each other up through their friendship. I like that it feels like Natasha and the boys are a band in the video… as opposed to a ‘pop star’ and minion of faceless dancers.”

Bedingfield has also volunteered to be a judge for KidzFit Jamathon, an annual dance contest put on by Florida organization Digital Vibez, of which Rony is a member. The contest aims to positively influence youth in underserved communities in Florida, and will take place July 29.