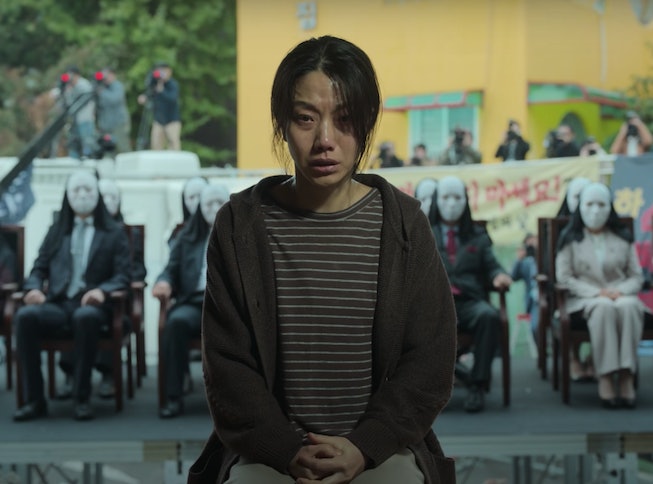 Now that Squid Game fever has passed, a new Korean horror series called Hellbound is coming to Netflix that will make you question the fragile and corrupt systems we’ve built our societies on. Just in time for the holidays!

“I would like to welcome you all to the new world,” reads the trailer description. “All Hell breaks loose. Utter chaos ravages the world.”

Well-poised to become a show everyone talks about for weeks, Hellbound, which premieres later this month, is about monsters who descend upon the Earth to drag victims to Hell, and the religious cult the monsters bring about by their appearance. Monsters from Lil Nas X’s Hell and real-life monsters in the form of a dangerous religious cult? There’s enough material here for everyone’s personal preference of darkness. The film comes from director Yeon Sang-ho, who directed Train to Busan, which tells the story of a group of people trapped on a train during a zombie outbreak in South Korea, as well as its sequel, Peninsula. It stars Yoo Ah-in, Kim Hyun-joo, and Park Jeong-min.

“In the series, unearthly beings appear out of nowhere to condemn people to Hell,” reads the show synopsis. “It doesn’t matter whether these events are a blessing or a curse: a new religious group is interpreting them all as the will of the divine. What unfolds through this predicament is an intense and highly-charged story about people who must survive under conditions of utter social chaos.”

From the description, it sounds not unlike HBO’s The Leftovers, from Lost creator Damon Lindelof, about the social chaos that ensues after 10 percent of the world’s population suddenly disappears one day — including the creation of a bizarre religious cult (led by Liv Tyler!), sans monsters.

A preview of that social chaos comes from some of the limited dialogues in the trailer, which includes one character, asking: “Do you think there can really be justice through a man-made law?” Asking the tough questions!

Hellbound premieres November 19. In the meantime, you can watch the full trailer here.

And if you’re still looking to fill that Squid Games-shaped hole in your heart, there are now three films on Netflix from creator Hwang Dong-Hyuk, including Silenced, about uncovered abuse at a school for hearing-impaired children, which went on to change South Korean law, and Miss Granny, about a woman in her 70s who magically regains her youth.