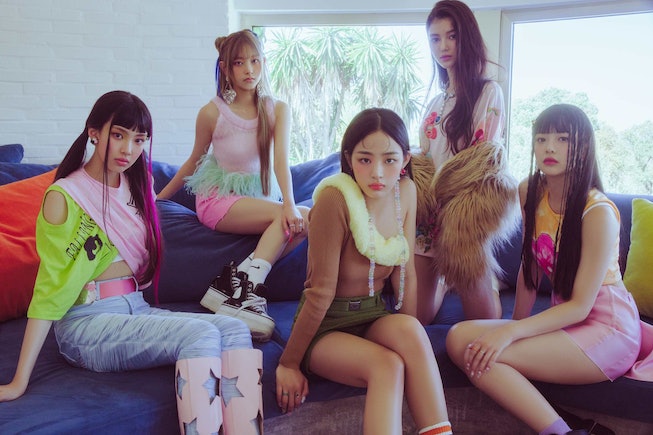 From the return of miniskirts to low-rise jeans, everyone is cashing in on the Y2K and early ‘00s nostalgia wave — and K-pop is no exception. Enter NewJeans, the sparkling, brand new girl group by HYBE (the South Korean entertainment company behind BTS and Tomorrow x Together) and its independent label ADOR that’s paying homage to that glitzy bygone era.

The new quintet — made up of members Minji, Danielle, Haerin, Hanni, and Hyein — made their soft launch on Friday with the release of the vibe-y, pop-R&B first single, “Attention,” a song that sounds like it was transmitted straight from the turn of the millennium. In the track’s flashy accompanying music video filmed in Spain, the members flawlessly execute early-aughts style choreography while wearing low-rise jeans, handkerchief tube tops, butterfly clips, wired headphones, and other stylish pieces you’d find scrolling on your TikTok FYP. They emanate effortless cool, and are already generating plenty of buzz online as fans resonate with their throwback sound and fashion style, as well as the group’s unique, K-pop standard-defying concept.

Put together by ADOR’s CEO and head producer Min Hee-Jin, NewJeans is the first group to debut on the independent label that’s prioritizing “innovative artist brands and tactics.” For NewJeans, that meant a surprise rollout which included zero teasers of the new music — and keeping the group’s official name and members a secret — ahead of their official debut on Friday, a stark break from the K-pop strategic norm. Instead, all five members of NewJeans were introduced via the group’s second music video “Hype Boy,” released the following Saturday, which included four different versions of the video filmed from the perspective of each member (members Danielle and Haerin were featured in one video).

Speaking on NewJeans’ unique group concept, Hee-Jin said in a press release: “‘Attention’ brings not only the quintet’s faces to light but also highlights the group’s name, NewJeans. Pop music is a culture that is very close to our daily life, so it is like the clothes we wear everyday. Just as jeans have withstood the test of time and found popularity among many regardless of their age and gender, NewJeans aspires to become an icon of generations — one you never grow tiresome of putting on.”

Indeed, with their clean and retro sound and fresh-faced presentation, NewJeans is definitely vying to be K-pop’s standout debut of the year. With NewJeans’ arrival, the focus of HYBE and K-pop’s takeover of the American market feels clearer than ever. Cute, talented, and, with their nostalgic and Gen Z-focused concept, NewJeans are undeniably primed to take off.

NewJeans will make their official debut on August 1 with the launch of their debut album. The project will contain four songs, “Attention,” “Hype Boy,” “Cookie,” and “Hurt,” three of which already have videos out. Before then, get to know all five members of the group, below.

Born in 2004, Kim Minji is a vocalist and dancer for NewJeans. The singer was born in Yeongwol-gun, Gangwon-do, South Korea, and previously had a cameo in BTS’ “Permission To Dance” music video.

Danielle Marsh is a dancer and singer of NewJeans. Born in 2005, the 17-year-old grew up in Australia and can speak both English and Korean.

16-year-old Haerin is a vocalist and dancer of NewJeans. She was born in Gimcheon, Gyeongsangbuk-do, South Korea and NewJeans is her first-ever girl group debut.

Vietnamese-Australian member Hanni is a vocalist and a primary dancer of NewJeans. The 18-year-old was born in Vietnam but was raised in Australia. She made a pre-debut cameo in BTS’ “Permission To Dance” video.

The youngest member of NewJeans, Hyein, 14, is a vocalist and dancer of the group. She was formerly a member of kid’s group USSO.GIRL, though she departed the project in 2018.