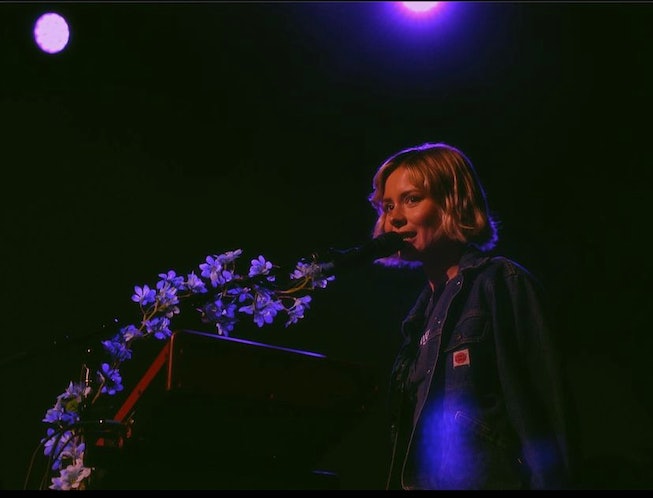 Nina Nesbitt knows what it’s like to be on the road. The Scottish singer-songwriter has just wrapped up the North American leg of James Arthur’s tour, joining him for 20 shows in 20 cities over the course of just one month. Nesbitt, whose touching new single about her relationship to her mother and grandmother through her artistry, “Dinner Table,” is out now, put together a tour diary for NYLON to capture the experience.

“I've had the best reaction to my latest single ‘Dinner Table,’” Nesbitt says of performing the song live. “It's so beautiful looking out into the crowd and seeing women holding each other while I play. So great to see some mums in the crowd with their daughters, too. I wrote it about my iconic 80-year-old Swedish grandma.”

With a new album coming out later this year, Nesbitt is busy at work in the studio. Take a look at Nesbitt’s tour diary, below.

I've been meeting some of my fans after some of the shows, I got chatting to this lovely guy called Nic. He told me he was a flight instructor and offered to take me on a private flight over Dallas... I couldn't resist the opportunity. I even got to fly the plane and managed not to crash it.

One of my friends from Houston recommended a Whataburger breakfast on my last tour, I'd had a few drinks and it was honestly the best thing ever. I needed to come back and try it sober. We stopped off on a long drive back from Houston and honestly it was incredible! Highly recommend breakfast at 1a.m.

I've had the best reaction to my latest single “Dinner Table,” it's so beautiful looking out into the crowd and seeing women holding each other while I play. So great to see some mums in the crowd with their daughters too. I wrote it about my iconic 80-year-old Swedish grandma.

Here's a picture of me in Nashville. I got a message from this lovely girl on Instagram the night before saying she would be bringing me a hat to wear on stage, it was purple with flashing lights. Just before I played a snippet of a Taylor Swift song, I shouted out to the crowd to see where the hat was, she was right at the back and it had to come flying through the crowd to me.

While in LA, I went over to East West studios to finish up one of the tracks for my new album. I was lucky enough to play on Frank Sinatra's piano, it sounded beautiful.

We had a long drive from Toronto to Montreal. We had to make a stop at one of the gas stations and there was a beautiful moose, I couldn't resist not taking a picture with it. I also saw the cutest toy which I had to get as a souvenir for my dogs, I'm sure they will be fighting over it when I get home.

I signed up to an app where you get tokens to exercise classes. I've been to ballet, hot yoga and boxing so far. It's been fun to do in the morning and on days off, it helps me stay sane while touring.

One of my favorite things is to go to thrift stores and see what bargains I can find. I've been looking for a denim jacket for a while and I found this one in Montreal, perfect for summer. Here's me in it, outside of The Fillmore in Philadelphia.

One of the things that keeps me zen on tour is having scented candles. They can turn any dressing room into a spa. I found this one at Target, it's a lavender and bergamot scent. It helps hotels and dressing rooms feel a bit more like home.

I go on every night with a set list, but it's always subject to change. A lot of these people are hearing my music for the first time, some want to stand and listen to the words and some want to drink and dance. I also like to keep my front of house engineer on his toes.

We had a quick stop off in Detroit and played at The Fillmore. The venue is a couple minutes from Eminem's Mom’s Spaghetti restaurant, I thought it would be rude not to try it.... I can confirm spaghetti in bread is delicious.

I've been asking the crowds to help me with a teaser for something very special that I will be announcing soon. Here's a picture of the lovely Philadelphia crowd helping me out... keep your eyes peeled.