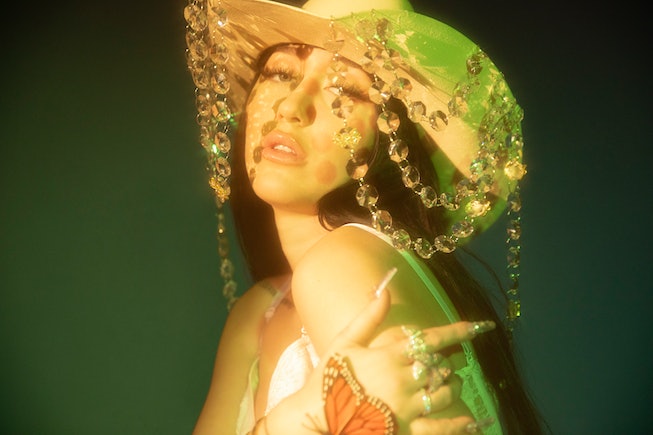 It feels like a dare, for someone to ask you to contemplate the end of the world in the middle of a global pandemic. But Noah Cyrus' latest EP, The End Of Everything, does so with surprising aplomb and understanding. The young singer's new project, out now, is a deep exploration of her own personal abyss — a process she puts on the same level as the ultimate and final end. As she explained it to Beats 1's Zane Lowe in a recent interview: "Yes, we're going to die. But at the same time... like anything that causes harm to you, that's going to go away, as well."

In that way, Cyrus' 8-track project — which hammers down on her body dysmorphia, inner guilt, and loneliness — also makes way for a surprising amount of roominess and relief; moments of light shining in to clear away some of the shadows. There's the voicemail from her father, Billy Ray Cyrus, telling her that he loves her, on "Young & Sad," and "I Got So High That I Saw Jesus" which, in its silliness, also reaches a sort of comforting religious revelation. In its openness and vulnerability, The End Of Everything finds Cyrus returning to her acoustic, folkier roots, where she can muse about the stars blinking out one by one over hand-plucked guitar.

A couple of days before the EP's release, NYLON caught up with Cyrus to get an idea of what songs might've inspired her bold new EP. She responded back by compiling a list of her all-time favorite songs, the ones she turns to when she's "in need of some good tunes."

"I grew up on so many different genres and appreciate many different artists," Cyrus explained via email. "The list is always changing, but if it's an all-time favorite it’s because it takes me back to a certain time of my life — either on the farm with my dad, or a fun trip I had down in Joshua Tree with some friends."

A mix that goes from James Taylor's Americana classic "Carolina in My Mind," to Kanye West's "Runaway," and Lady Gaga's "Speechless," it's easy to track where Cyrus' own big, musical ambitions may come from. Stream it below, and read on to hear how Cyrus celebrated her EP release in quarantine, as well as her thoughts on what makes a song truly timeless.

You released The End Of Everything EP last week. How have you been celebrating?

I’ve been with a few friends that I’ve been quarantining with since March, so it was really nice to have them around when the project came out. They got me a cake, too. I definitely would have loved to have a release party with friends and fans, but we did it on Zoom instead. It was cool to play the record for fans an hour before the project dropped and to see their reactions.

There are a few classics on this list — what makes for a timeless song in your opinion?

I think what makes for a timeless song is that it feels fresh every time you listen to it. Not to be so on the nose, but they never get old. You kind of get that amazing feeling every time you listen, and it feels like you haven’t heard it before and you’re discovering it all over again. There’s a certain nostalgia to it.

Have your listening habits changed during quarantine?

Not really. I’ve definitely had more time to listen to music but I’ve always had a really wide taste. Maybe now I can just dive a little deeper or give an album a chance that I never really paid attention to. I’m always going from an Alex Turner record to a Doja Cat song and then a James Blake record within minutes of each other.

Who’s a new artist that you’ve discovered recently and are excited about?

There’s too many. I have so many friends starting to get amazing looks in music and I’m excited for all of them.

What’s your deserted island album, and why?

Such a hard question. I don’t even know. Can I take 3? Submarine by Alex Turner, any one of my dad’s albums, and Assume Form by James Blake. But I don’t know. Too many.