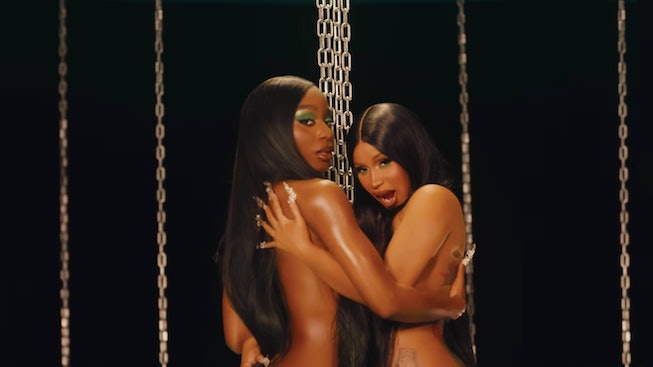 After two years of silence, Normani is back and ready to claim the pop throne.

The Houston native has been teasing the imminent arrival of her anticipated solo debut album for years now, and she has finally unleashed her latest single “Wild Side” featuring Cardi B and its astonishing new music video on Friday — and not a moment too soon.

The release promptly broke the Internet’s collective mind as fans tried to process the hit-after-hit of sheer star talent contained in the video’s tight four minutes: Normani is lounging on slick red lacquer in cut-out black lingerie; Normani is defying the laws of physics in a purple body-con dress; Normani and Cardi B are both naked and possibly rubbing titties with ass-length hair; Normani is scissoring Normani in a jaw-dropping, CGI-marvel dance scene!

“I’m sorry but if I was a pop girl scheduled to perform at the same show as Normani I’d simply cancel,” one fan tweeted in a perfect encapsulation of her power. “I would never embarrass myself like that.”

“Wild Side” is Normani’s first new music since 2019’s “Motivation,” its rigorous and retro-themed dance-centered video, for those who weren’t already clued in from her Fifth Harmony days, proved that she was the next one to watch. She doubles down on that prediction on “Wild Side,” a song and visual one-two hit combo that spurred critics and fans alike to praise everything from her clean and crisp choreography, to her snatched body, to the video’s set decoration, styling choices and more.

“Normani has the cleanest choreography I’ve seen in a while,” Twitter user @imanishante praised. “Her fluidity is STUNNING.”

“the song. the visuals. the aaliyah sample. the looks. the choreography. everything was great! normani ATE! my girl is worth the hype and it was well worth the wait! i am so proud of her! she’s here to stay and take over!,” effused another user, @NINETIESRNB.

“Wild Side” also includes a sample of Aaliyah’s hit “One In A Million,” which was another major facet of the track that garnered a lot of attention from Normani’s fans. The spare Timbaland-produced beat, lightly dusted with the chirping of crickets, makes up the backbone of “Wild Side,” which Normani elevates with her own cooing, velvety vocals. Fans praised that she clearly took the time to make the sample her own rather than releasing a song that emulates the late and beloved R&B legend.

“I AM LEGITIMATELY IN TEARS. AALIYAH IS SMILING DOWN SO HARD. ATE THAT!!! @normani,” tweeted producer Amorphous.

Normani, meanwhile, has been rightfully basking in the glow of her comeback, tweeting herself that the video was a cultural reset, and revealing just how much work she put in on perfecting the choreography. “grab ya knee pads. ya gallon of water & and two sports bras lmao yeahhh had to layer them,” she tweeted in response to fans wondering how they’re supposed recreate the dance for TikTok.

“Wild Side” is the second time Normani and Cardi B have collaborated, but first they’ve featured on the same track together. Normani made a small cameo in Cardi B’s 2020 hit “WAP” dancing in the outro.

“I had already been inrehearsal for about three weeks preparing for the video when Cardi heard the record for the first time,” Normani said of their collaboration in a press release. “She really showed up for me and brought this record to life by simply doing what Cardi does best. I love that woman down and I’m forever grateful.”

While Normani hasn’t officially confirmed that “Wild Side” is part of a larger project, it’s likely that an official debut album announcement will soon follow. Then again, she could pull another bait-and-switch as she did with “Motivation,” but with every one of her comebacks exceeding the previous, how could we complain?

See more of the internet’s reaction of “Wild Side” below.