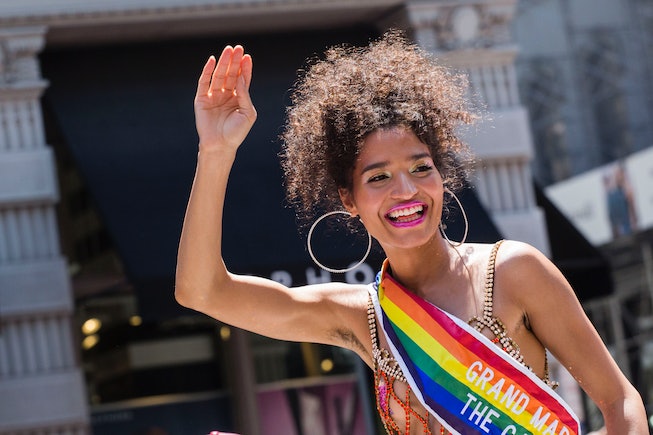 We all knew it was coming, but that doesn’t mean it hurts any less. For the first time in 50 years, New York’s annual LGBTQ+ Pride Parade is officially canceled — or, at the very least, postponed to a yet-to-be-determined date — due to ongoing safety concerns surrounding the spread of COVID-19. As New York Mayor Bill de Blasio said this morning during a coronavirus briefing, “This probably will not surprise you, but I am now reporting today that we will cancel city permits for June,” a decision that affects not only Pride, but also the Salute to Israel Parade and the Puerto Rican Day Parade.

Luckily, all is not lost. Immediately after announcing the cancelation (something de Blasio described as “not a happy announcement but one we have to make”), the mayor followed up with a slight glimmer of hope: “A lot of these events will be postponed. I want to be clear: the permits are being canceled for June, but the event organizers, a lot of them are looking at doing something later in the year, and we’re going to work with them on that.”

Nevertheless, the blow still stings. Last year, New York welcomed more than five million visitors as they hosted World Pride, a celebration made all that much more exciting as it coincided with the 50th anniversary of the Stonewall Riots. As it stood, this year would have been yet another 50th anniversary celebration — that of the Pride Parade itself, which held its first outing in 1970 — which de Blasio rightfully categorized as a “very big deal.”

“That march is such an important part of life in this city,” he said mournfully, “but this year, in particular, was going to be something that was a historic moment.”

It’s a feeling that is echoed by David A. Correa, the Interim Executive Director for Heritage of Pride, the nonprofit organization behind our city’s yearly celebrations. "Pride is a staple in New York City, and is oftentimes a safe space for many," he said. "This weighed on our members, board, and staff, knowing that we serve as a haven for vulnerable communities. It was not easy to arrive at the decision to cancel Pride as we have come to know it over the years, especially given the financial impact this could have on LGBTQIA+ people and businesses, but our top priority remains the health and well-being of all those that participate with us."

In its place, Heritage of Pride is following the lead of Pride organizers around the world by opting to participate in InterPride’s 24-hour “Global Pride” virtual event. Like this weekend’s Together At Home concert curated by Lady Gaga, it will be broadcast around the world on Saturday, June 27th, and, according to a release, will feature “musical performances, speeches, and key messages from human rights activists.” (Whether confirmed New York Pride headliners like Janelle Monáe, Pussy Riot, and Betty Who will join is, of course, still up in the air.)

To imagine Pride — by all means, a communal event to its core — as solely a virtual celebration is naturally heartbreaking. But in the end, the move was the right one. “The bottom line, of course, is to think about safety, to think about saving lives, protecting people’s health, speeding us to that day where we get more normal,” de Blasio said during his press briefing, a statement many of us can understand and agree with. “So this is the right thing to do and this is what we are doing.”

Signing off, the mayor noted, “We’re going to miss all three of them in June. But they will be back and we will find the right way to do it working with all the event organizers, and that joy that Pride and all these events bring, that celebration, will be back. We’re going to do it when it’s the right time.”