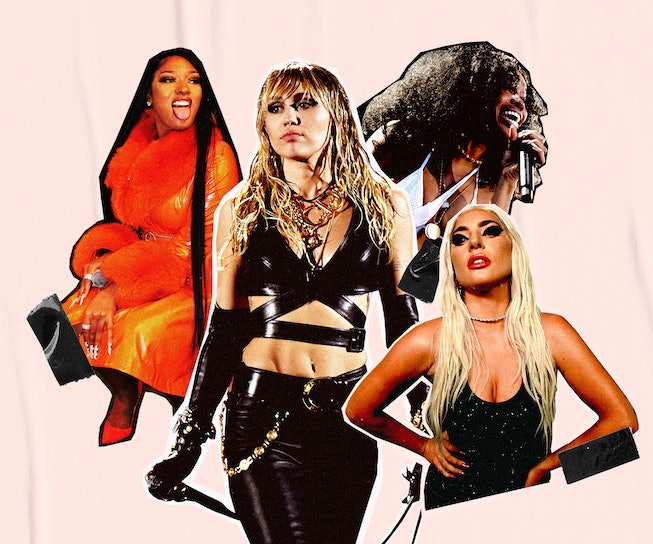 2020 proved to be a difficult year for the entire planet, and the entertainment industry was no exception to those hit by crisis. Still, musical output continued to flow with artists creating and releasing some of their best works, even amidst the chaos, pain and transformation of the year. Read on for NYLON's Editor Picks of our top five favorite songs of the year, in no particular order.

This groovy, sexy jam about a lusty relationship was my own personal song of the summer.

"I Know The End" by Phoebe Bridgers

The tale of Bridgers' imagined hero's journey into the apocalypse — complete with cathartic screams as it comes to a close — is the unofficial anthem of 2020.

Once we're allowed back into clubs and fitness classes, this Dua Lipa disco-pop banger (that got stuck in my head for weeks at a time) will be on heavy rotation for years to come.

"Forget Me Too" by Machine Gun Kelly

Machine Gun Kelly emerged as the pied piper of the pop-punk revival in 2020, and this angsty duet with Halsey was meant to be screamed from the center of a mosh pit.

"Too Late" by The Weeknd

Someone famously once tweeted that The Weeknd makes "haunted strip club music," and this dark, eerie track is perhaps the perfect example.

As a self-proclaimed Bright Eyes Super Fan, there was a lot riding on this single — the band's first in eight years — for me, personally. The band (and the bagpipes!) did not disappoint.

This is the song that made me cry the most this year. Of course it had to make my top five.

One of those songs that is almost painful to listen too because it is so f*cking good.

If there's a song that will convince even the biggest homebody that they miss dancing all night at a club (me), let it be this.

Who knew Channel Tres and Robyn made such an iconic duo?

Add this to every getting-ready-to-go-out playlist once the vaccine drops.

TikTok challenge virality aside, this song is another reason why Dua Lipa is the queen of dance-pop bangers. (Tip: Follow up with her collab track "Electricity" with Silk City.)

"Rain On Me" by Lady Gaga and Ariana Grande

I made Alexa play this at least once a day for a solid month. The only way to truly enjoy this song is to watch Benito Skinner's parody video (@bennydrama on Instagram) along with it, too.

Every time I hear this wonderful tune by Texas-native and folk songwriter Lomelda — a song about trying your best, and the promises we make to ourselves — I'm stunned. Something in its soft and acoustic rhythm reminds of the gentle rush of a stream, its intentional lyricism, a poem, and Lomelda's own warm, crackling voice, a hug.

All things considered, I had a good year when it came to romance. So why did I still listen to SZA’s moody, R&B slow burner “Hit Different” constantly? Ok, maybe it’s true that I just love the thrill of toxic drama, but what’s probably more accurate is that SZA’s talent of making the harder parts of falling in love and losing it still feel meaningful remains unmatched.

Chance The Rapper might have been the one who said: "bars so hard / That there ain't one gosh darn part you can't tweet," but Cardi B and Megan Thee Stallion — with their slick and steamy, p*ssy positive single heard 'round the world, "WAP" — actually achieved, and perfected, it.

"Save a Kiss" by Jessie Ware

Of all the artists who tried disco this year, my favorite came from British singer Jessie Ware and her album What's Your Pleasure? Its standout, "Save A Kiss," is a fervent, blissful escape. In a clubless year, this song was a worthy stand-in for all the sweaty, and cathartic dance moments we would've had, packaged up in glowing synths, strobing beats, and a heady euphoria that keeps on going and going.

At the cusp of March into April, the song I was playing the most is this melancholy tune by Mura Masa and Tirzah, for no other reason than I am a huge fan of both of these artists. But as the months passed, "Today" became a close companion for this strange, blue period. Not least of all because Tirzah, in her sly and looping croon, captures the sensation of everything blurring together in its hook: "passing me by, passing me by, passing me by..."

This song speaks to my soft spot for emo rap and all of its sing shouting, gloomy lyrics, and catchy pop hooks.

Nearly impossible for me to pick a favorite song off of Phoebe Bridgers’s ’Punisher,’ but I always come back to this extremely depressing, chaotic lullaby.

One of the only songs to put me in a good mood this summer — it sounds like being tipsy in the back of an Uber during a NYC summer at 2am with the windows down. That, and I'll take any crumbs Rihanna has to offer.

This song is so smooth and sweet and catchy. It reminds of songs I loved so much growing up, like 50’s “21 Questions,” and Ja Rule’s “Mesmerize.”

I needed a glitzy pop song about being hot and manifesting good energy to get me through the rest of this pandemic and Miss Grande delivered.

This poppy, earworm of a track from newcomer 24kGoldn and Puerto Rican rapper Iann Dior brightens my mood every single time I hear it.

"Save Your Tears" - The Weeknd

The Weeknd's synth heavy song about wistfully seeing your ex across a crowded room is full of imaginative details that will make you miss both your ex and crowded rooms.

A standout folklore track that captures the brand of sweet nostalgia Taylor Swift is best at, especially in the layered, echoing line, "meet me behind the mall."

The first time I heard Beyoncé's shout out Only Fans on the "Savage" Remix, it sent a tingle down my spine.

The times I ventured out of my apartment this summer, the late and great Pop Smoke's baritone growl could reliably be heard booming out of every car window in NYC, soundtracking the season.

"Boys Will Be Boys" by Dua Lipa

An underrated gem on Dua Lipa's 'Future Nostalgia,' this track tackles exactly what it's like to be a girl. The lyrics hit me in the face more than I expected them to.

If I could bottle an ounce of Megan Thee Stallion's confidence and use it as perfume, I totally would. Listening to this song is the second best thing.

Did I first hear this song on TikTok? Yes. Did it lead me to become a Princess Nokia fan? Also yes.

"Yo Perreo Sola" by Bad Bunny

When I first heard this song, I knew it was going to be played in clubs everywhere. Then we couldn't go to clubs anymore and "I twerk alone" took on a whole new meaning.

I'm going to be honest and say I didn't pay much attention to Machine Gun Kelly until his recent renaissance. This song brought me back to the early '00s and I want to stay there.

Listen to the full playlist on Spotify: