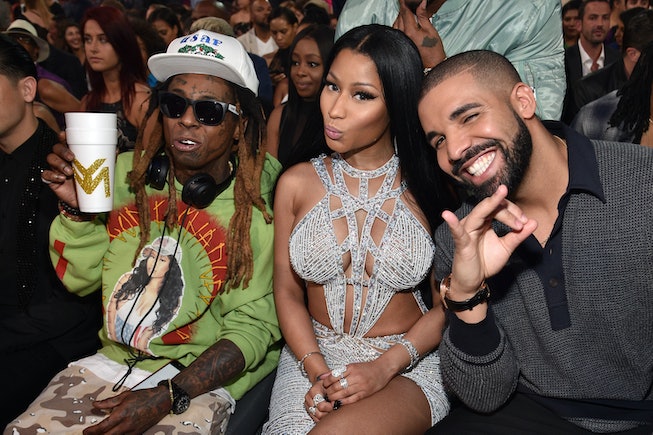 Young Money is coming back. The iconic rap record label founded by Lil Wayne and more popularly used to reference its three top artists — Lil Wayne, Nicki Minaj, and Drake — will reunite for a rare family performance in Toronto come August. The show will be a part of Drake’s October World Weekend, a new festival organized by the rapper’s current label October’s Very Own, taking place over three days at various venues across Toronto.

Young Money’s performance will mark the first group appearance from the three rappers and friends in several years since regularly taking the stage together in the early 2010s. Both Minaj and Drake rose to fame on the label, though Drake now releases music on his own label, OVO Sound. Also confirmed to perform at October World Weekend include artists Lil Baby and Chris Brown — who are currently on tour together — and a new act called “All Canadian North Stars.”

October World Weekend is Drake’s latest event for his hometown as he works to bring back his label’s long-standing annual festival OVO Fest. The rapper described the three-day mini festival as his “Road To OVO Fest Tour” on the event flyer as he hopes to launch OVO Fest to a global audience come 2023.

“OCTOBER WORLD WEEKEND 🌏 I am currently working on bringing OVO FEST around the world in 2023 for the 10th Anniversary but of course we wanted to turn the city up for the summer!!! More event announcements to come,” he wrote on Instagram.

Below, see everything we know about October World Weekend, including the exact dates, location, and how to buy tickets.

The three-day event will host some big stars and friends of Drake. Nicki Minaj, Lil Wayne, Lil Baby, and Chris Brown are all slated to perform, as well as an act called “All Canadian North Stars.” See the full schedule below.

How to buy tickets to October World Weekend 2022