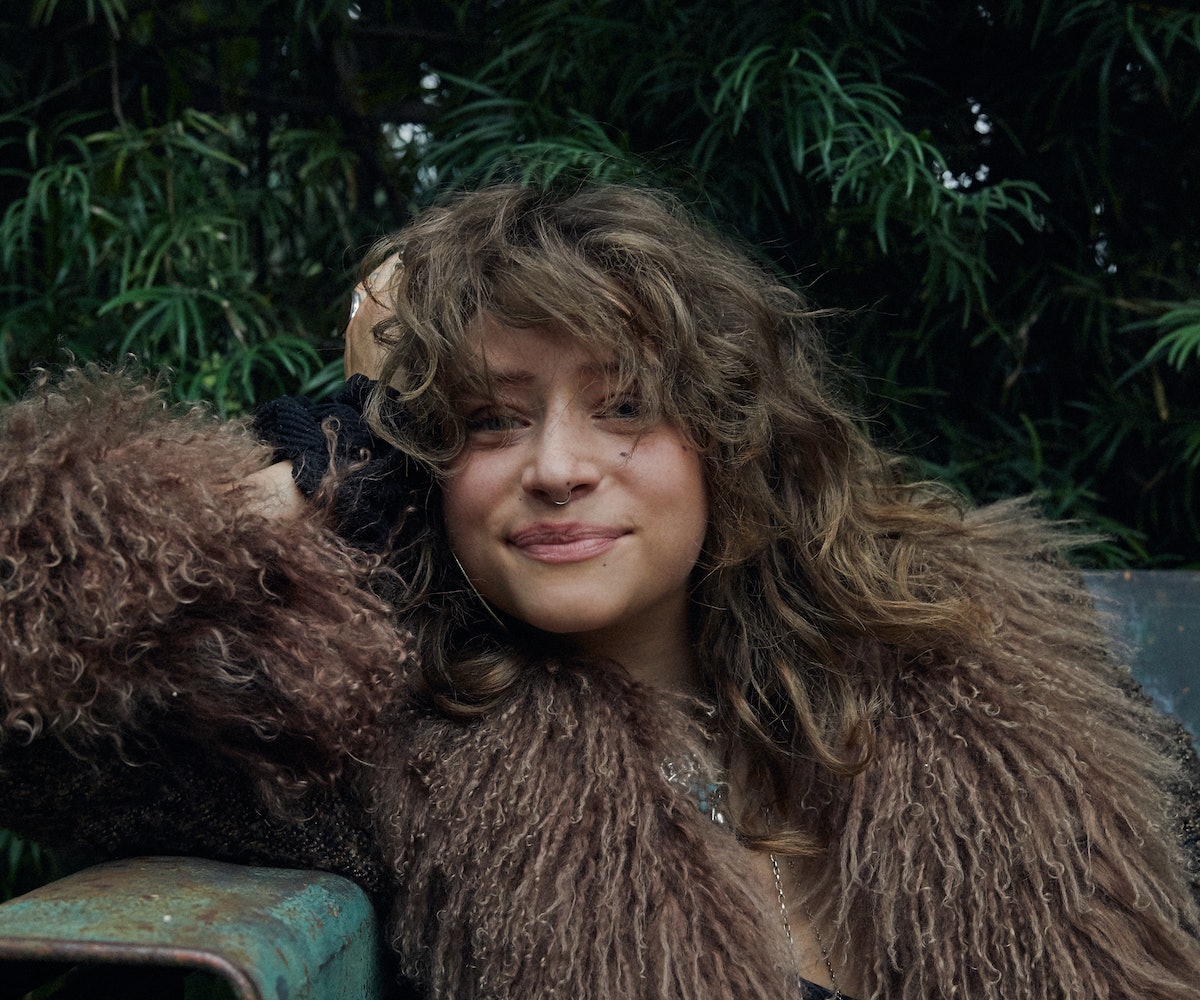 Odessa A’zion doesn’t want you to watch her new Netflix show, Grand Army. But, she also really, really does. It’s complicated. “I'm excited and I'm nervous and all the things in between because I've never been this vulnerable in front of the camera before,” she explains. “I know that it's important to play this type of a character, but at the same time, it is a little bit embarrassing to think about my friends or my family that are going to watch it. I don't want nobody to watch it; just let it come out, and just let it sit there. But at the same time, I want people to watch it. So that's why I have super mixed feelings.”

Grand Army, out Oct. 16 and based on the play Slut by Katie Cappiello, tells the story of five high school students navigating adolescence in New York City. A’zion headlines the ensemble cast as Joey Del Marco, the school’s confident alpha girl who experiences trauma at the hands of her own friends. Consider it a grittier Euphoria, with less glittery eye makeup and more subway rides. “When we did the table reads, I was like, ‘Holy sh*t, this is crazy. This is not what I expected,’” A’zion recalls. “I loved the first two episodes [which I’d read before], but like the rest of it was amazing. It's so f*cking insane.”

Grand Army marks a gritty, adult turn — and one for which she’ll surely be lauded by critics. The 19-year-old's previous big break was opposite Nina Dobrev in the CBS sitcom Fam, which was canceled last year after one season. A’zion has mixed feelings about that, too. “When I was doing the sitcom, not going to lie, I was like, ‘I don't want to be here,’” she says. ”I felt like sitcom acting wasn't ‘real’ acting, and I wanted to do something real and that people could relate to more… But since it only got one season, it gave me the time to look back and be like, ‘I'm very, very grateful for that.’ It was a cool experience. I would definitely be down to do another sitcom one day.”

While Fam filmed in front of a studio audience on a contained set, Grand Army, which is named for the Brooklyn plaza, saw A’Zion on location — first in Toronto and eventually in New York itself. “I got to know Canada pretty well,” she says. “I really, really like Toronto. I got this bike at Kensington market, this little red bike that I would drive around all the time. And it was only 30 bucks… though it was eventually stolen.” It helped that many of her castmates, several of whom were Cappiello’s students and acting for the first time, were Canadian natives who not only knew the area but also already knew each other.

A’zion recalls arriving for the first table read and thinking, “seems like a whole lot of these motherf*ckers knew each other before,” she laughs. “I'm like, ‘... Did I miss something?’” By the time the cast arrived in New York, however, she was the one showing everyone around. “I love shooting in New York because I have so many friends [there] that I would just be like, ‘Yo, pull up to set. This is where we're filming today. Don’t tell anyone,’” she says. “There’s one scene where we’re walking to the party, and we shot that outside at five in the morning, so I had three of my homies come visit the set.”

Of course, if you take a cast of young actors and give them free rein of a new city, chances are some serious bonding will occur — for further proof, check out any of A’zion’s three lengthy Grand Army highlights on Instagram Stories. Leading up to the show’s debut, A’zion is more upset than anything about the fact that the cast won’t get to reunite for a proper premiere to celebrate together. “I've never had a premiere, and this would have been my first [one] ever,” she laments. “I was so excited, too, because I've been acting since I was 15 and I've never gone to a single premiere. There is this one indie movie that I did that had a premiere, but I didn't know about it because I didn't check my email. This one, I was really excited. We were all very excited for the premiere, but that's not happening.” Still, they’re trying to make the most of it. “We might get together in New York and just all go together the day that it's released,” she says.

While COVID-19 may have delayed her first premiere experience, it has led to another dream come true for A’zion, albeit a less expected one: her first voiceover role. “I booked an insurance commercial and it was amazing,” she says. “I really want to go into voiceover acting.” So, if anyone out there is casting, she’s available. “I promise I'll do something funny for you,” she promises. “Or weird.”