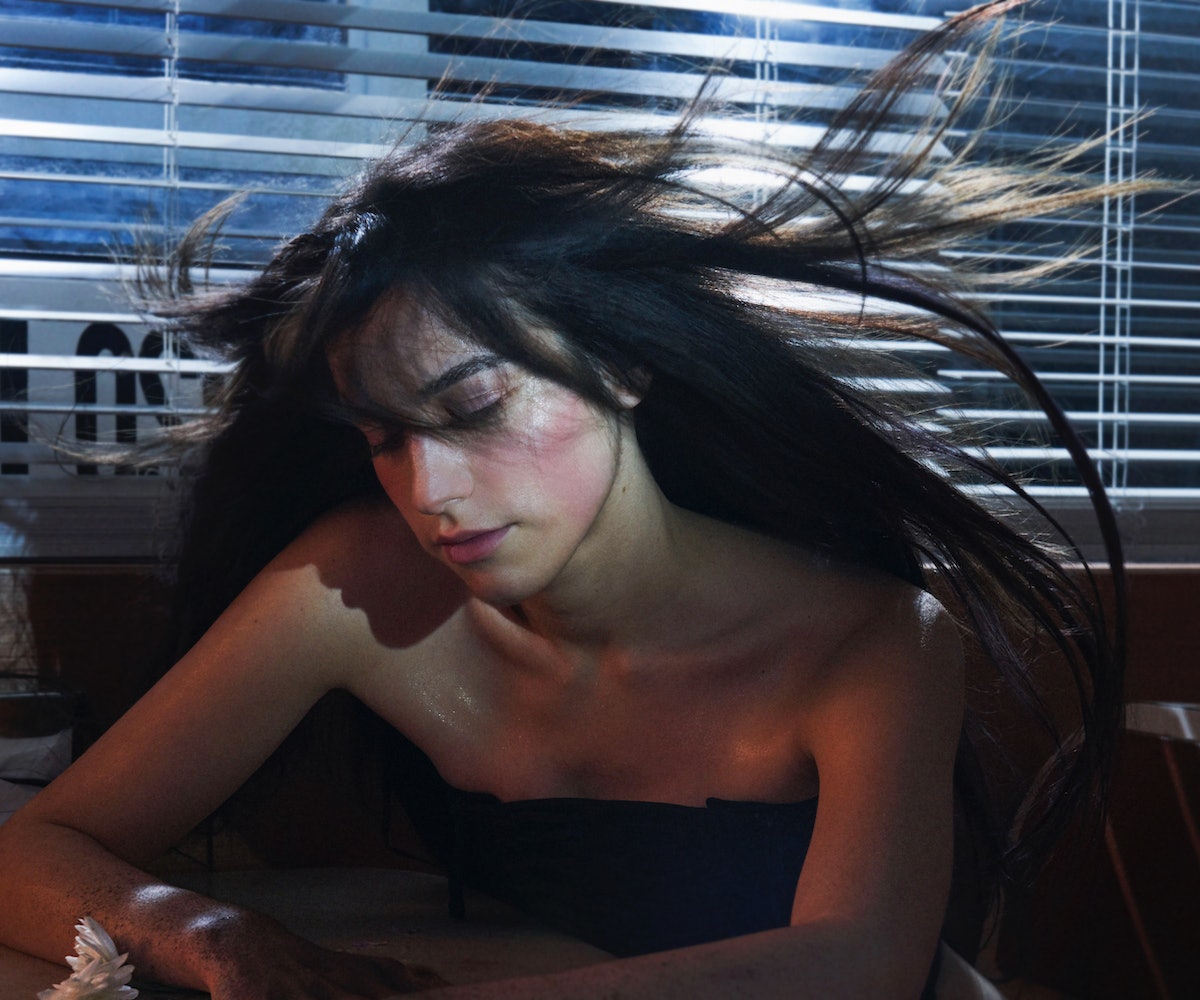 If paradise is real, then Marylou Mayniel, who makes music as Oklou, is surely there in the riverbed of the Loire in France. "My foot's in the river right now," she states when we connect over the phone one Tuesday afternoon, the meditative sound of swishing water bubbling up through the connection.

The French singer and producer — who ran in the now-defunct Parisian all-female DJ crew TGAF, and is a close friend of the London experimental pop collective NUXXE — is gearing up to share her first mixtape, Galore, out September 24. Since the release of her 2018 EP Rite of May, a tight 6-track project defined by glowing synths and errant field recordings, Oklou underwent a metamorphic creative period; alongside her friend the hardcore artist Krampf she dabbled in scoring video games. More personally, in 2019, she worked her way through a difficult period of what she describes as feeling emotionally "anesthetized." "I was in London with my boyfriend and I guess I was just starting to feel very lonely,” she explains. “I would just feel nothing at all.”

Emerging from that absence are the songs that now populate Galore, an album that Oklou says takes place in a “wonderful world” outside of reality. With the few singles already released, a materializing window into the new universe reveals its mythic inhabitants: lost sheep, warriors on white horses, a “goddess of a lonely night,” as the fantastic imagery from her latest single “god’s chariots” details. “I was existing [as a] part of something,” Oklou says, water rushing in the background. “Using my pain and my sorrows to have something beautiful out of it.”

Awash with clouds of synth and curling, delicate melodies, Galore is a quietly stirring feat that posits Oklou as one of left-field pop’s most entrancing auteurs. Below, the experimentalist recounts her difficult journey to the album, the joy of crafting full narratives through her music, and her close friendship with the emerging London collective NUXXE.

Do you remember the moment when the concept for Galore solidified in your mind?

I guess there's been several moments. But, if I can isolate one of them, it would be last August. I was in North America with [Galore writer and co-producer] Casey MQ and two other friends. I was playing him my demos for him to hear what I was working on, and wonderful things happened between him and I. I saw him listening to my stuff and getting very emotional; he knew what I was going through and I felt like he immediately connected with that moment of my life and the music that was obviously related. He connected to that as a friend and as an artist — he said things to me that I didn't even understand at the time. Listening to my stuff he was like, “What you're actually talking about, the main topic, is escaping from reality.” He used that kind of phrase at some point and I was like oh, well that's so f*cking true, and, you know I didn't even see that before. I was just making music not really thinking about the words I was using or the energy I was spreading the songs with and he really helped me do that work of understanding what was happening in my heart. And since then, I knew that he was the perfect partner for me to write a beautiful, full thing.

You’ve said that this album was borne through a period of feeling “anesthetized.” What did you mean by that?

I guess it's just... it's not really deep. I mean, it is, but in 2019 I was in London with my boyfriend and I was just starting to feel very lonely. I was confronting my choices which maybe, were not good ones at the time. And the songs, I talk about feeling lonely, isolation, wanting to exist more like... I think I was a bit — I'm careful with that word because I think it's a real disease, you should know — I think I was not depressed but close to that mental state. And the anesthetized term comes from that feeling where I was neither happy nor sad. I would just feel nothing at all. I think it's really bad. I was not really OK. The music I was creating and the things I used to be fascinated with, and I still am, I think I was most attracted to the very fantastic and surreal universes. It makes sense because I think I wanted to change my life completely. The place I was living in, and the emotions I was not experiencing [Laughs.] So, there's a huge fantastic kind of very tale-ish side of Galore. It comes from that need to escape and to be in a wonderful world.

The project uses a lot of airy synths and it feels very spacious. What draws you to that sound?

Well, you actually said an important word. It's the emotional space. I noticed that in almost all my leads, I always put reverb on it and I could name a lot of songs...where there is that same feeling of big spaces and use of reverb and delay. I'm talking about technical stuff but, I think I'm trying to find a balance between a softness and something that you know is a perfect voice for lullabies. And something a bit more, I don't know if it's a word, but stellar.

I like that you said lullabies because there is something very soothing about the music. Making this record, did it feel healing or did you find some sort of conclusion to what you were feeling?

I wouldn't say conclusion. Life has shown me that the elements that inspired me during the writing of the piece, it's still going on [laughs.] I talk a lot about love and the relationship I had with my boyfriend at the time. I could write maybe two other albums since.

I don't recall actually working [this] much for a project of music ever; maybe when I was in musical school, when I was 14. But as an artist trying to develop my career, I don't think I've ever been that focused, and I felt really alive. I think that's what I was looking for, you know? I felt like I was existing, part of something, making something beautiful and using my pain and my sorrows to have something beautiful out of it.

Do you feel you’ve grown artistically and creatively through making this new record?

Yes. You know, [I had] been working on a video game with my friend in 2018. I think that project, I understood something I guess maybe crucial in the way I'm working and what I actually like to do, is that I love stories. Having a story to write about from the beginning to the end. You know, not just one song saying one thing, and then you finish the song and it's another subject. I really wanted to have that whole universe as if you were writing a soundtrack of a movie or something. I really like that process, the mindset it requires.

I think with Galore, I really achieved writing songs and thinking about, like, a long play with that energy, with that desire of wanting to talk about one story where so many things happen but it's one moment. I mean it's like a lot of, I'm not inventing anything, I just think that, I guess until I worked on that video game, I didn't realize what I wanted to do, really. I knew that I loved writing pop songs and I love catchy hooks and stuff and I love playing keyboards and singing songs, but I needed more than that to get me through, staying in a studio for hours. I just needed a proper frame. A beautiful context, beautiful purpose, I guess.

I also wanted to ask you a little bit about NUXXE. Did you get opinions from the members when you were working on Galore?

Yes, Shygirl, she's been helping me for “god's chariots,” actually, she's been writing one of the verse with me. Sega [Bodega] has been working on the mixtape as well for some drums and stuff so yeah. Definitely we're...maybe I work more closely with Salvador [Sega Bodega], but yeah that's it. That's it.

It seems like NUXXE is making a big impact on experimental, left-field pop. As a close friend, do you have any thoughts on where NUXXE fits in the larger music sphere, what role they’re playing.

It's hard to say. What I know I appreciate in Salvador's and [Shygirl's] and Chloe's energy is that I love the way they connect with both, and you said it, experimental and more pop side of music. I feel like Salvador's work is all about that. We have a lot of things in common when we work together. I feel like we have the same love for catchy hooks, for example, vocal lines and harmonies and stuff. And at the same time, he's like such a genius when it comes to creating beats with anything. And that's what make his sounds so special.