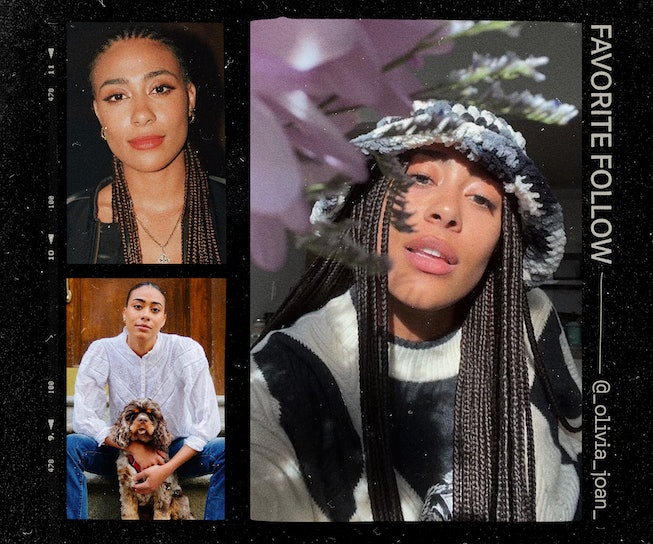 If the TikTok algorithm has been good to you, you’ve likely stumbled across Olivia Joan’s account. Bright-eyed and cheerful, the social media star — born Olivia Joan Galli — begins almost every video with a chipper, “Hi, guys,” before throwing together an effortlessly fabulous ensemble.

Typically she presents three outfit options and lets viewers pick what she should wear in the comments, but over time people noticed that each outfit recipe included at least one wildly lavish item. From vintage Prada jackets to Manolo Blahnik shoes, the 24-year-old’s closet is dripping in couture.

On TikTok, Galli eventually revealed the items once belonged to her late grandmother, Joan B.Johnson, who co-founded Johnson Products Company, with her husband, George Johnson, in 1954. Their historic business supplied haircare products like Ultra Sheen and Afro Sheen to the Black community and became the first Black-owned business to be included in the stock exchange.

When we meet for coffee at Maman, in Soho, Galli greets me with a warm hug while wearing a brown Louis Vuitton jacket. I wrongly assume the garment belonged to Ms. Johnson, and make a mental note to ask about its origin. “They have an allowance for me,” she later explains, blushing at my curiosity. It turns out the garment was not her grandmother’s or a product of Galli’s shopping excursions. Instead, it came to her as a gift from the luxury retailer who she now works for.

Though she’s made a name for herself online as a fashionable style guide, Galli is not your average influencer. When she’s not posting on TikTok she can be found running around New York, armed with a camera and shot list, to produce photoshoots for her impressive clientele. Despite getting consistent work requests from publications like Vogue and The New York Times, Galli remains humble, if not surprised, by her success.

“I wanted to quit so many times,” she admits. A career in the arts was a pipe dream come true for Galli, born from her determination and willingness to ignore her family's concerns. “I struggled because my family didn't understand the arts. They were more finance and more business-oriented. So when I told my family, ‘I think I want to pursue the arts,’ my family was like, ‘Why don't you go to a real college and do student photography on the side?’”

While Galli studied at the Art Institute of Chicago and Parsons University, her siblings pursued more traditional paths. “They always make jokes [like], ‘Oh we’re going to have to house you in our guest house,” and now they’re like, ‘We might need you to house us!’” she says. “I’m the underdog.”

With several beautiful photoshoots under her belt and over 80 thousand followers on TikTok, that label might be a stretch. Even so, Galli is more than ready to establish her own legacy. Below we discuss Galli’s career journey, along with her experience photographing her family, and accidental rise on TikTok:

On Studying Photography in College

When I first started photography, I wanted to do editorial fashion. But then, I just fell in love with storytelling. It was always hard for me to express my feelings through writing, and verbal communication. Then an outlet for me was photography, and I could express myself through an image.

On Capturing Her Grandmother's Essence

The last photo I took of my grandmother, it was with my grandmother and my mom. I had taken a photo of my grandmother almost two years prior to it, around my freshman year of college and she was so different. She didn't need oxygen 24/7 and her face wasn't as bloated, because she wasn’t going through radiation. That f****d her up. She was able to walk.

Then this time around, in the second-year photo, she had to have oxygen and you can just see the pain that she was going through. It was really emotional for me, because I was like, this isn't the grandmother that I remember. Then to have my mom there as well, in the same session, them two together — It was very painful and really hard for me to do, but it needed to be done.

You can't always document the positive things in life. You have to document the real and authentic. That was one that solidified for me that storytelling is what I want to do. I want to just document reality.

On Her First Major Photoshoot

My first project out of college was with Vogue. They said, ‘We're going to send you two bags. You can photograph it whoever you want.’ I was like, ‘Oh, this is really intense.’ They wanted it to be in the September issue of Vogue. My grandmother passed away the year prior to that in September, September 6th. I was like, well, this is going to be the one-year passing. It's going in Vogue. I need to commemorate my grandmother in some way.

I found this portrait, a painted portrait of my grandmother and wanted to incorporate this somehow. I ended up just having her in the background, and the bags set up in my grandparent's space, kind of showing off Black excellence, and also commemorating her.

On Creating Dynamic Portraits of Men and Women

I just finished this really cool project with the New York Times, documenting my family. That was the first time I photographed my brother and my grandfather, and that was challenging. When it comes to photographing women, I'll go lower than them to get them more in a power stance, and do different angles and lighting to make them seem as powerful as possible — how I perceive them. Then with men, I'm like, ‘I don't want that’ It sounds really terrible.

So yeah, I was kind of reteaching myself how to photograph men in a way that is powerful, but not, ‘Yeah, I'm a man.’ That was a challenge for me. It's still, sometimes, intimidating for me, because it's like, I don't know, I just love photographing women.

I have never seen a gallery exhibition of just a bunch of portraits of Black women, of all ages, sizes, and walks of life. I feel like that needs to be a thing.

On Her TikTok Origin Story

None of my friends were answering my texts. I was going on a date with my ex — he wasn't my ex at the time — but, I had just gotten these two dresses, and I was like, ‘I don't know what to wear.’

“Before that, I was posting really silly dancing videos with my mom, like during quarantine, as one does. I was like, ‘Okay, let me just do one little TikTok. Maybe I'll get three responses, I just need someone to tell me because I need to leave.’

I did it, and I got a lot of feedback. A lot of people really liked my style. I was like, ‘Wait, this is actually fun.’ It's also helpful for me because I like to go back through my TikToks and see the outfits that I wore. Then I just started having fun posting about going on dates with my ex-boyfriend and going on lunch outings, and just different things.

I already had a lot of my grandmother's clothing. [In videos] I'd be like, ‘Oh, these shoes are my grandmother's.’ People started asking, ‘Who is your grandmother? Can we see more of the clothing?’ It's so cool that people are interested in her. That started becoming the main focus, but now I’m trying to go back to ‘pick my outfit’ [videos].

On Merging Her Social Media and Photography Careers

I just don't know how I would do it. I talked to one content creator, I forgot her name. I'm really bad with names. She was saying that when I do ‘get ready with me’ videos, I should say a story, have a photo as the background — as the green screen background — and talk about the meaning behind the photo.”

“I just don't know how well that video would translate. Also, I like having a separation. It's interesting, my TikTok name is Olivia Joan, just my grandmother's name and my middle name, and then my photography is Olivia Galli. It feels like I have two separate entities. I have TikTok where it's, like, a release. Then photography, that's my career.

“Sometimes I just don't want to combine the two. I just want to have fun.

NEXT UP
Culture
An Exhaustive Breakdown Of The Balenciaga Controversy
Entertainment
Olivia Rodrigo Hinted At New Music In 2023
Culture
Mowalola Teams Up With Bratz For A Daring, High Fashion Collection
Fashion
Reformation & Canada Goose Team Up To Warm You Up