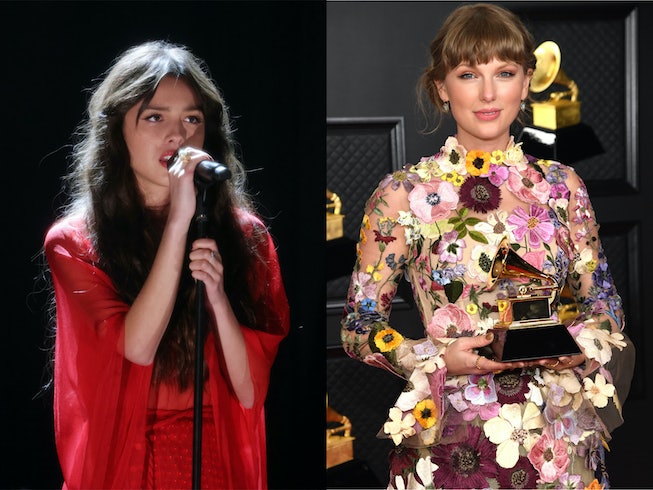 It’s widely known that Olivia Rodrigo was heavily inspired by Taylor Swift’s “Cruel Summer” while making “Deja Vu.” As she explains in an episode of Rolling Stone’s The Breakdown: “I love ‘Cruel Summer.’ That’s one of my favorite songs ever. I love the yell-y vocal in it, the harmonized yells she does. I feel like they’re super electric and moving, so I wanted to do something like that.”

The young pop star has now made that moment of inspiration official by adding writing credits for Taylor Swift, Jack Antonoff, and St. Vincent — the three writers credited on “Cruel Summer” — to “Deja Vu” into the metadata on both Spotify and TIDAL, Rolling Stone points out. Rodrigo and her producer Daniel Nigro are already credited on the track.

“Deja Vu” is now the second song off of Sour to have a Taylor Swift and Jack Antonoff writing credit. Rodrigo’s “1 step forward, 3 steps back” interpolates Swift’s song “New Year’s Day” from her album Reputation. While Swift and Rodrigo have yet to release a song together, Rodrigo did pop up in Swift’s rollout for her Fearless rerelease, and the pair exchanged handwritten letters when they finally met in person at the 2021 BRIT Awards. No doubt a studio session shouldn’t be too far behind!

Incidentally, the two stars first interacted when Swift shared Rodrigo’s cover of “Cruel Summer” to her Instagram stories and praised it by writing: “THE TALENT! Love This!!! Thanks for this beautiful performance @olivia.rodrigo @mtv.” Rodrigo responded excitedly on Twitter, “I AM GONNA FRAME THIS SCREENSHOT AND HANG IT ABOVE MY FIRSTBORN’S CRIB.”

Rodrigo released her debut album Sour in May. She recently put out Sour Prom, a concert film performance of her new record.