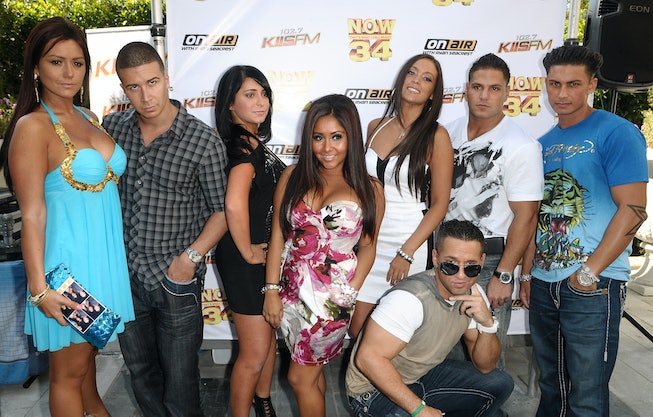 The original cast of Jersey Shore has some strong words for MTV, the network that made them famous.

Following the announcement on Wednesday that the network plans to launch Jersey Shore 2.0 — another addition to reboot mania, which will "chronicle a new generation of share house roommates hitting the same famed beaches and boardwalks along the Atlantic to make new memories all summer long” — the OG cast of the reality show has taken a public stand declaring their displeasure with the decision.

"It's been 13 years since the iconic cast of Jersey Shore fist-pumped their way into our lives and stole our hearts,” a statement from MTV read. “Now, the time-honored tradition continues with a new group of roommates moving into their own Shore house. They may have traded their poofs for plumped pouts and UV rays for spray tans, but when things heat up in Jersey, the Shore is still the place to be to make memories all summer long."

"As a cast that took a chance with a network in need, we put our most vulnerable moments on television for the world to see. We gave our all over the past 13 years, became a family and continue to open our lives for the world. So please understand that we are not in support of a version that will exploit our original show, our hard work and authenticity to gain viewers."

The cast then plugged the upcoming sixth season of their sequel series, adding, "Don't forget to tune into an all new season of Jersey Shore: Family Vacation,” and captioning it all with: #WeAreJerseyShore.

Jersey Shore ended in 2012 after six seasons; in 2018, MTV brought back the original cast (minus Sammi “Sweetheart” Giancola) for Jersey Shore: Family Vacation, in which the crew heads back to the shore with their now-families in tow.

MTV also recently announced its plans to reboot The Hills (again) with an entirely new, more diverse cast. Of that news, Hills alum Spencer Pratt said on TikTok: "We've got breaking news — The Hills reboot with a new cast has been greenlit. I cannot confirm or deny that I may end up narrating the series. Most likely, I'll probably just be the host of the after-show. That's what I'm manifesting with my crystals."

NEXT UP
Culture
The Biggest Revelations From The Price Of Glee Docuseries
Culture
Angelus Turns 25: The Devastating Twist That Changed Buffy The Vampire Slayer & TV Forever
Culture
Netflix Is Seriously Cracking Down On Sharing Passwords
Culture
Phoebe Dynevor Will Not Return for Bridgerton Season 3
Style + Culture, delivered straight to your inbox.