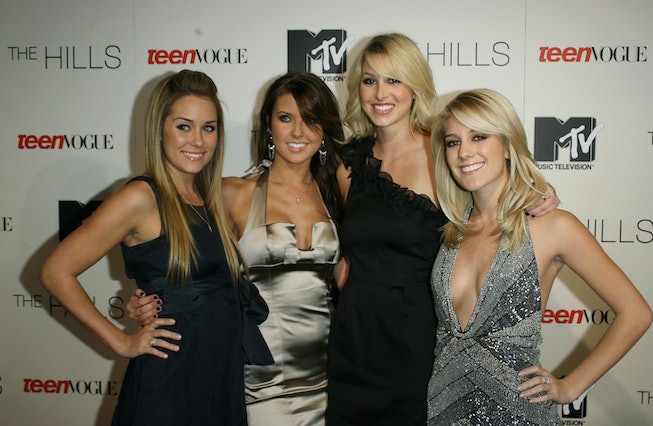 Back in the early aughts, MTV took a big risk that paid off with a big reward. Riding high off the success of their drama-filled beachy reality series Laguna Beach, producers greenlit a spinoff that followed some of the original show’s cast members as they left the safety of high school and entered the real world — or their very privileged, very sheltered idea of it. The Hills, as it was called, became an even greater success as viewers around the world began to accept that reality series about luxurious lifestyles, sunny locales, and petty squabbles were bottomless sources of truly Grade-A entertainment. Birthing the careers of now-household names like Lauren Conrad, Audrina Patridge, Whitney Port, and controversial couple Heidi Montag and Spencer Pratt, The Hills was reality TV gold — a perfect blend of beautiful people, gorgeous scenery, expendable income, and of course, tons of drama, drama, and more drama.

It’s been sixteen years since The Hills premiered and a dozen since it aired its series finale. But it’s also 2022 now, a year where Hollywood Rules clearly state that “everything good from the past simply must be carried into the future in some way, shape, or form.” Which is why, I guess, the popular series is now getting the reboot treatment.

But didn’t The Hills already get the reboot treatment, you may ask. A question to which I’d be forced to respond with an emphatic, “Well, dear reader, kind of…” Back in 2018, MTV introduced The Hills: New Beginnings, an update to the original show that felt more like a revival than a flesh-and-blood reboot. Gathering together much of the original cast from The Hills, the two-season wonder that was MTV’s New Beginnings primarily served as a check-in for everyone involved with the original series, more than a decade after it went off air.

This reboot, however, will be different. The Hills: Next Gen, as it’s been billed, is an entirely new incarnation that will introduce an entirely new cast. And while the original show’s cast was painfully white (something viewers willfully accepted in 2006, but would certainly not fly in today’s media landscape), it is expected that the cast for the upcoming series will be much more diverse — all the better to reflect what it’s really like to live in Los Angeles today. (Of course, according to Heidi Montag, The Hills never had a diversity issue to begin with. All that dark hair!)

According to Deadline, The Hills: Next Gen will follow “a close group of 20-something friends and aspiring entrepreneurs who are coming of age in a very different L.A.” This new cast will “navigate realities of race, class, identity, addiction, and family drama, along with the thrills of romance and becoming self-made amidst the exclusive enclave of the hills in Malibu.”

The Hills is just the latest MTV series to be brought back years after it seemingly disappeared into the thin air of Viacom’s production studio. Over the last several years, the channel once known for playing music videos and now known for guilty pleasure TV about teenage parents has produced new iterations of some of its most popular flagship series, including Cribs, Jersey Shore, and The Real World. So if you’ve been itching for a taste of the early 2000s but don’t want to actually watch something that was produced during that time, MTV has you covered — now you can watch early 2000s TV with a brand new 2020s sheen. It’s the best of both worlds!