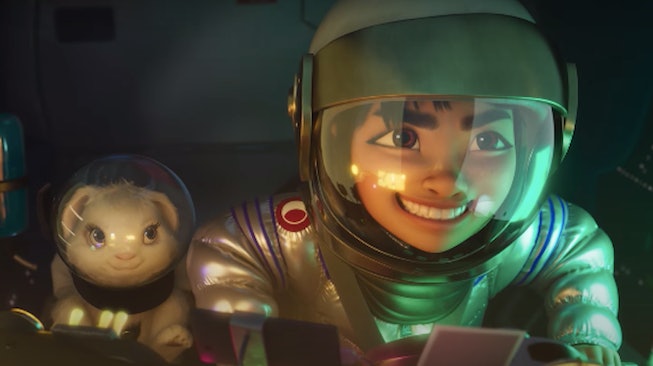 Pixar, the reigning champion of making both children and adults sob during movies, has some friendly competition. Netflix released the trailer for its forthcoming, heartwarming animated feature, Over The Moon, and it looks like a real tear jerker.

Since this is a children's film with stakes, naturally it kicks off with the death of the protagonist Fei Fei's mother. Tragic, but true! But not before Fei Fei is instilled with a lifelong fascination with her mother's favorite Chinese mythology tale: The story of Chang’e, the moon goddess. Fast-forward a few years and Fei Fei is a burgeoning young woman in STEM on a mission to prove the goddess' existence. With a little coding and engineering, she builds a rocket that launches her to the moon and sets up the show's fantastical journey.

Over The Moon cut no corners, recruiting animation legend Glen Keane to bring the vision to life for his directorial debut. The Oscar-winning animator is no joke. He previously tenured at Disney, where he brought characters like Ariel from The Little Mermaid, The Beast from Beauty and the Beast, and the title characters from Pocahontas and Tarzan to life. Heard of them? Oscar-winning Gravity composer Steven Price covers the score, with songs by Christopher Curtis, Marjorie Duffield and Helen Park.

Over The Moon hits the streaming service sometime this fall, and until then, you can watch the trailer below.