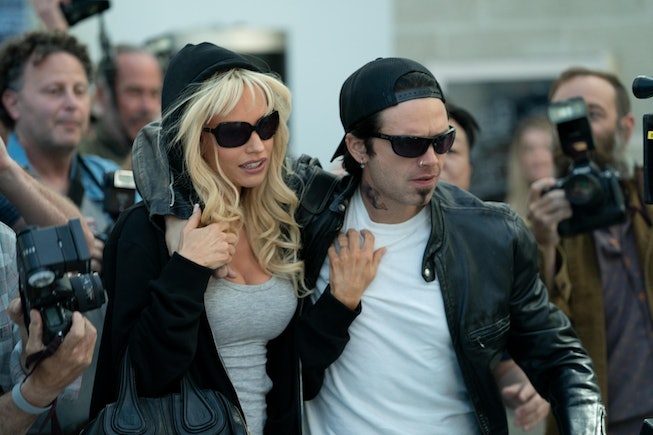 One of Hulu’s newest, buzziest series tells the story of Baywatch’s Pamela Anderson and Mötley Crüe drummer Tommy Lee’s wild relationship, culminating in the leak of the iconic couple’s private sex tape. Pam & Tommy has already been heralded for its leads’ transformations into the real-life subjects they’re portraying, with Lily James stepping into the role of Anderson and Sebastian Stan taking on the heavily tattooed bad boy Lee.

But Anderson, at least, has already expressed displeasure with the project, saying it’s “very painful” that a show is excavating a traumatic time in her life, especially without her input. Courtney Love wrote in a now-deleted Facebook post that the tape “destroyed my friend Pamela’s life,” and disparaged the eight-episode series. While Stan spoke with Lee about the role, James was unable to get in touch with Anderson, who reportedly turned down requests to be involved in making the series. Now, the director of show, Craig Gillespie, is defending Pam & Tommy.

In an interview with Dazed, Gillespie — who also directed a biopic about another woman’s traumatic public undoing with I, Tonya — said that he feels that he and the writers portrayed the story in the most empathetic way possible.

“Rob Siegel (and the other writers) have written such an empathetic storyline,” Gillespie said. “I felt in my heart that we were portraying them in an honest, empathetic way that leaves the viewer feeling culpable, and was a strong commentary on how complicit we are in all of this, particularly through the lens of today. I feel there’s a really strong story that she’ll like.”

When asked whether Anderson will be confused, if she watches the show, that the first few episodes largely focus on the man who stole the tape (Rand Gauthier, played by Seth Rogan), Gillespie said, “But that’s what I like about it. It’s subverting expectations… Moving forward, it really becomes Pamela’s story, and the way that that sneaks up on you is a great journey for the audience.”

Head here for everything else to know about Pam & Tommy.