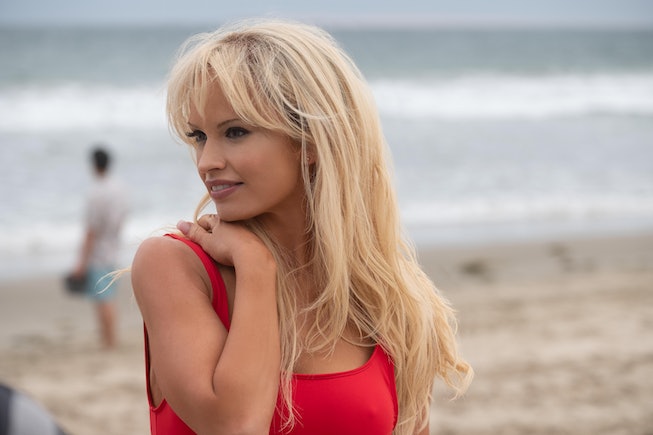 It’s never easy for an actor to totally embody a living celebrity already well-known by the public — but Lily James and Sebastian Stan seem to have done just that as they stepped into the shoes of Pamela Anderson and Tommy Lee for Hulu’s upcoming eight-part limited series, Pam & Tommy.

Per Hulu, the show is “set in the Wild West early days of the Internet,” and based on the true story of Anderson and Lee’s sex tape theft and subsequent worldwide leak in 1997. Seth Rogen will play the disgruntled contractor who stole and later leaked the VHS tape on the internet.

While the internet may be into the series, some of the people who were actually there for the events the show will depict — including Courtney Love and Pamela Anderson herself — are reportedly not so thrilled.

Here’s everything we know about the limited series so far:

Pamela Anderson is not happy that Pam & Tommy is happening.

Anderson is reportedly not happy with the forthcoming series. “Pamela has no intention of watching this God awful show, absolutely not. Never,” an unnamed source told The Sun in May of late year.

“She’s never heard of the actors playing her or Tommy, and doesn’t care to know them. She and her family think the show is a cheap knockoff. The whole thing is a joke to them,” the source reportedly said.

Another source told ET on January 21, 2022, "The upcoming Pam & Tommy Hulu series has been very painful for Pamela Anderson and for anyone that loves her. It is shocking that this series is allowed to happen without her approval."

"Pamela has no regrets about her life," the source said, "but the only thing she would probably erase is this burglary. She feels so violated to this day. It brings back a very painful time for her."

“I find this so f–king outrageous . When Pam / tommy sex tape was out / myself @pattyschemel @xmadmx were making a record. And the lone women in many recording studios in la…” Love wrote on Facebook in the post, as captured by The Daily Mail.

“Where all / ALL! The staff engineers / producers / owners / were watching the sex tape with huge schadenfraude . . Guffaws , It was disgusting . I banned anyone discussing it. It destroyed my friend Pamelas life . Utterly.”

Love also added that she denied a request from the series’ production to use an old Rolling Stone cover of hers. “Last week I was asked to approve using a rolling stone cover of mine / shot by mark seliger in this piece of s–t . That they had approved . I said ‘f–k no .’ shocked . Gentleman don’t approve this sort of thing,” Love continued. “My heart goes out to Pammy…”

The newest trailer for Pam & Tommy shows how the couple’s private sex tape was leaked — and how the public fallout was much worse for Pam than Tommy.

In the newest trailer for the series (dropped January 5, 2022), Anderson must navigate the public fallout of her private sex tape leaking all over the world. Being the early days of the internet, the realization of how far the tape can and will spread takes a minute to fully grasp.

Watch the trailer for Pam & Tommy below:

Pam & Tommy mainly addresses the aftermath of the couple’s sex tape leaking to the public.

Pam & Tommy will take a look back at the pair’s three-year relationship — including when they famously got married in 1995 after knowing each other for less than a week. But it will largely center on the events of their private tape leaking, cementing the couple’s status as constant tabloid fodder. Pam and Tommy’s marriage ended in 1998; around the time that Lee went to jail for physically assaulting Anderson.

The limited series will have an eight-episode run.