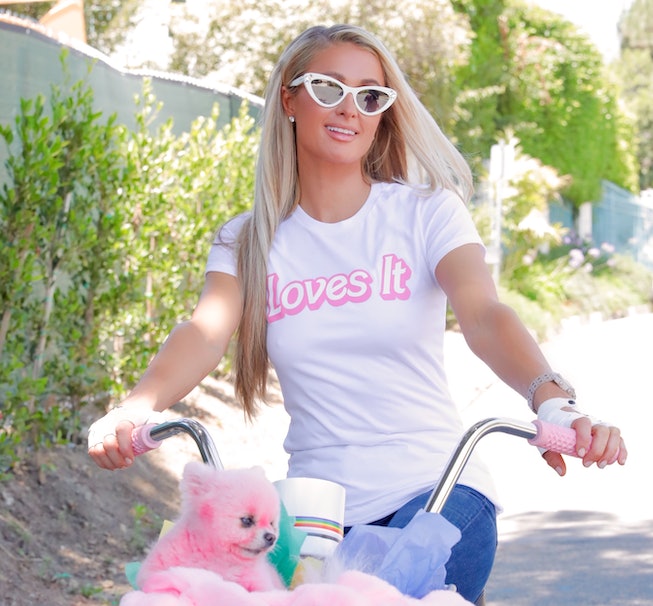 By now you should know the deal: early 2000s nostalgia is the name of the game. The revivalist movement has a vice-like grip over fashion, music, and culture at large, and the era can't be discussed without mention of Paris Hilton. The socialite, heiress, and reality television star experienced her heyday in conjunction with Y2K and cemented herself as a cultural icon, a title she still rightfully holds today. Now, Hilton is going candid in her forthcoming documentary This Is Paris.

The YouTube Originals documentary is set to show viewers a more candid, emotionally raw side of Hilton. "I'm nervous," she admits in the documentary's sneak peak. "I'm shaking. It's hard to even eat, because my stomach is just like, turning. I don't know — it's something that's very personal, and not something I like talking about."

The teaser clips hints at some of Hilton's past traumas that she's never discussed publicly. "No one really knows who I am," she says. "Something happened in my childhood that I've never talked about with anyone. I still have nightmares about it."

We'll have to wait until September 14 to get the full scoop, but speaking with The Talk, Hilton sheds light on the vast space between her "That's Hot" blasé rich girl persona and the real her. "I created a mask to hide the trauma, so that's why I think I created this character," she explained.

Filming This Is Paris turned out to be deeply cathartic experience for Hilton. She and Emmy-winning director Alexandra Dean became extremely close, and Dean's questioning pushed Hilton to truly process the trauma that she had been holding onto for decades. "I think when people see this film, they're really going to see a different side to me than they've ever seen before," said Hilton. "Because I honestly didn't even know who I was up until this year. I really learned a lot about myself through this film."

NEXT UP
Culture
Phoebe Dynevor Will Not Return for Bridgerton Season 3
Culture
Paris Hilton Welcomes A Baby Boy
Culture
Succession Season 4 Trailer Explodes With Family Drama
Culture
The Biggest Revelations From The Price Of Glee Docuseries
Style + Culture, delivered straight to your inbox.