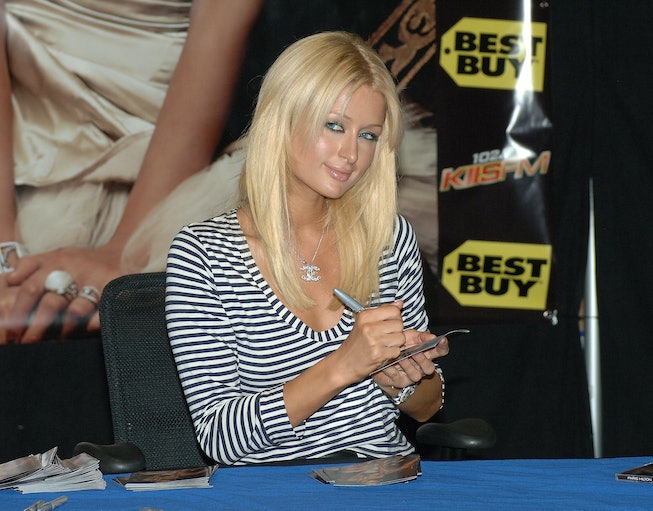 Earlier this week, Paris Hilton promised that she had something for her fans that would break the internet. On Tuesday, she posted a TikTok of her catwalking down her driveway with the caption, “Me when I have a secret that’s going to break the internet on 12/30.” The next day, she dangled a few new details: “Me omw to the record studio after User409279 said we need to bring back Y2K pop,” Hilton wrote on TikTok accompanied by a photo of her Photoshopped onto a lifeboat accompanied by an instrumental version of “My Heart Will Go On.”

While the first rule of breaking the internet is not talking about wanting to break the internet, Hilton is such an iconoclast that we can forgive her. After all, she basically invented being an influencer. The fruits of that promise arrived on Friday, when the star released a re-recording of her hit “Stars Are Blind,” a gleaming, sonic time capsule of 2006.

Taking a page out of Taylor Swift’s nomenclature, Hilton released “Stars Are Blind (Paris’ Version),” which includes fresh vocals that she worked with the song’s original producer Fernando Garibay to re-record.

Hilton dusted off “Stars Are Blind” for the first time in years this summer, performing the track at a Los Angeles Pride concert in June, alongside Christina Aguilera. She also performed the song at Britney Spears’ wedding and at a Grammys afterparty earlier this year.

“Stars Are Blind” originally appeared on Hilton’s only album Paris in 2006, which also included a slinky cover of “Do Ya Think I’m Sexy,” and the club anthem “Turn It Up,” where she chants like one of Gwen Stefani’s cheerleaders. Hilton released a smattering of singles in the 2010s, but nothing ever reached the level of the seminal single — however, the re-recording is just the beginning of the return of Hilton’s foray into music.

“Looks like Y2K is here to stay and Paris Hilton is making music a key part of her 2023 plan,” a press release reads. Hilton confirmed this on Twitter, writing, “more new music to come in the new year” at 12:20 a.m. It’s unclear why she didn’t tweet at 11:11, famously her most favorite time of the day.

While we eagerly await the revival of Hilton’s music career, you can listen to “Stars Are Blind (Paris’ Version)” only on Amazon Prime, though she wrote on Twitter that it will soon be available on Spotify.