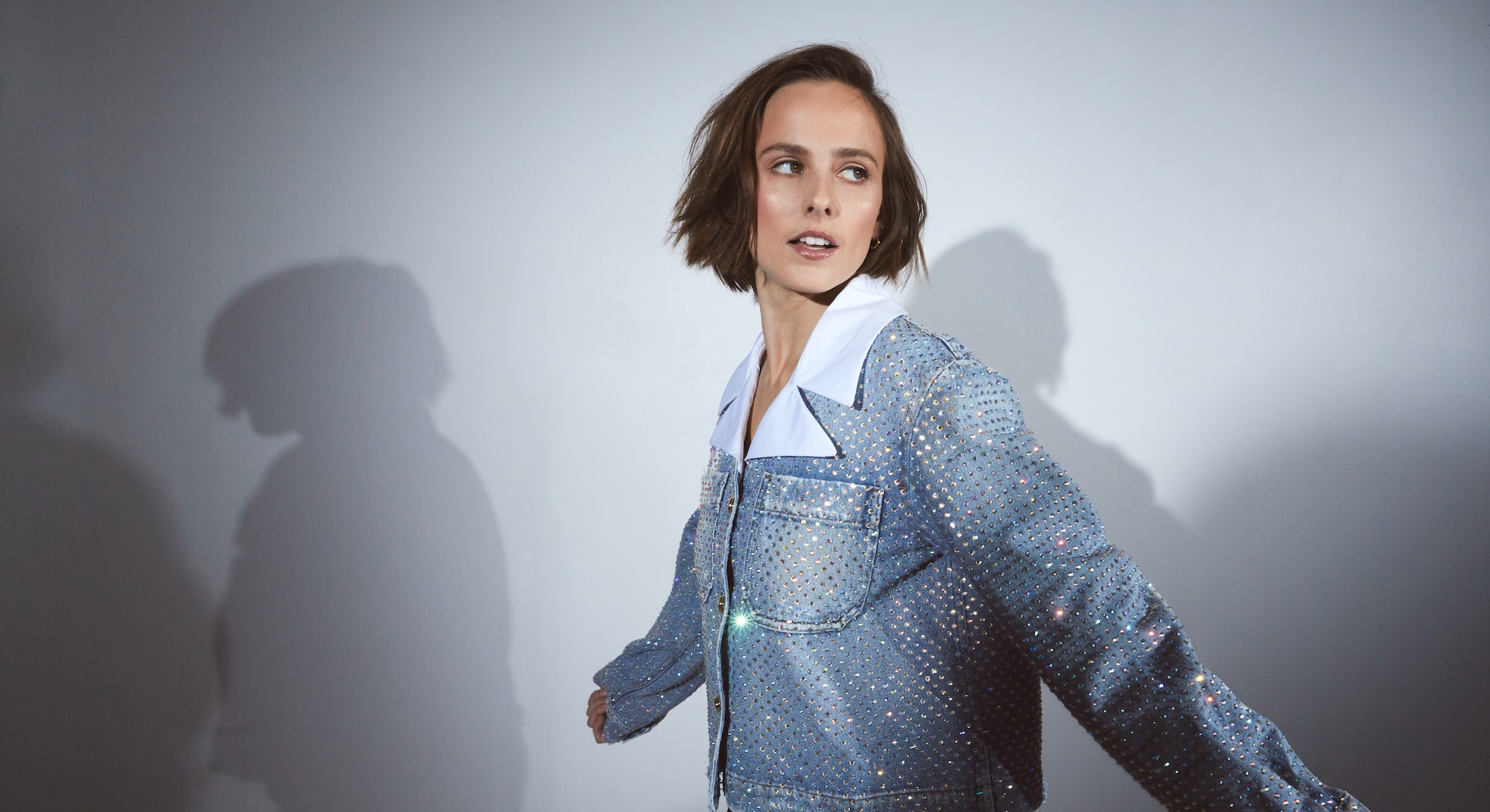 Pauline Chalamet recently had what one might call her Larry David moment. She was attending her first-ever fashion show for Miu Miu’s Spring 2022 collection in Paris, when, like David at Staud before her, she realized she didn’t know how to act. “I almost burst out laughing because it's so serious,” she says. “It really feels like an extension of the art world — like you're going into a gallery in Chelsea and you're like, ‘I don't get it. There are people who do. And I know that I'm not supposed to talk loud.’ At the end, all the models come out and it’s so impressive. But no one’s clapping? Anyways, it was great.”

The 29-year-old actor recounts this over lunch at The Odeon, a French bistro and New York staple located just a few blocks from where she’s currently staying with a family friend in Tribeca. Despite being born and raised in Manhattan (she’s a graduate of LaGuardia High School, best known as the Fame school and for its long list of notable alumni, including Nicki Minaj, Jennifer Aniston, and Chalamet’s younger brother, Timothée), she’s only been here once before, when she and a high school friend mistook it for a casual diner before reading the menu and realizing that they and their credit-card-less wallets were mistaken. “I don't really even know how we ended up paying for it,” she reminisces. The restaurant in the midst of the Friday lunch rush, with baskets of fries and oversize salads piling up at nearly every table. The date itself is notable only because it’s the Friday before Halloween and, more importantly, almost three weeks prior to the debut of HBO Max’s The Sex Lives of College Girls, Chalamet’s first major acting job.

The show, created by Mindy Kaling, follows four random roommates as they navigate their freshman year of college. In it, Chalamet plays Kimberly, the most straight-laced and occasionally naive of the four. She’s a small town girl out of her element but making the most of her experience (by Episode 3, she’s released her inhibitions enough to attend a fully naked college rager). The show itself is laugh-out-loud funny, with blink-and-you’ll-miss-it pop culture references and plenty of “I can’t believe this is happening” moments. It’s also grounded and often poignant, with devastating blows that will send you right back to those moments of collegiate heartbreak. Filming the show in Los Angeles over the course of nine months, Chalamet had the rare opportunity of getting to relive — and revise — her own college adventures.

“I got a do-over,” she says. “Kimberly is very strong. She’s the quirky friend, but she’s also a total bad*ss. I was not like that.” The college in the show is a fictional small liberal arts school in Vermont, not unlike Bard College, where Chalamet graduated with a double major in theater and political studies in 2014. “I became a really good student at Bard and I fell in love with learning,” she says, choosing her words thoughtfully. “I cannot say I liked going to Bard. For me, I think it was very small. I felt money pressure. I really felt you needed to have a certain amount of money to be there. I was dating a boy at the time who was a photographer and so sweet, and I really credit him with why I stayed. I had this shift around sophomore year where I was like, ‘I’m either making the most of this or I'm leaving.’” She stayed, but immediately decamped to Paris upon graduation, telling basically no one of her decision. “I told my family after I had signed a lease,” she says.

Paris, where she still primarily lives today, is where her passion for acting solidified. She enrolled in Studio Théatre d'Asnières, where she would spend mornings taking classes and participating in workshops, and the afternoons rehearsing for company productions. “It was one of the best years of my life,” she says. The school also encouraged its students to work beyond the company, at which point Chalamet fell in love with the script for a new play. She auditioned for five months for the role; she made it to the final round, but she didn’t get it. “I was heartbroken,” she says. “I was slapping the floor of my apartment in Paris, but a switch went off in me where I was like, ‘OK, I don’t want to wait this long for another project where I want it so badly.’ I needed that heartbreak.”

She turned to a few mentors, who all voiced the same concern. “The advice I was getting was, basically, ‘Paris is great and you can live there, but if you're interested in things going faster, you have to come to the U.S.,’” she recalls. “I had to make a deal with myself. I was like, ‘OK, you want to be living here, but what do you want more?’” Chalamet has mixed feelings about the machinations of Hollywood. “I don't want to use the word repulsed because it's too strong, but I feel averse to the way the acting industry is sold here,” she says. “It's very much like, ‘Luck is all you need. And you sell your soul to just do it.’ It can be so hard and ruthless and relentless.”

But in the moment, she realizes she was feeling that grind in Paris, too, where acting had become her whole life. In New York, she can find balance, popping into a quick audition and then heading uptown to see her grandmother in the same afternoon. Eventually, she found a manager who understood what she needed: a bit of both. “I had all these meetings and I was like, ‘I'm here now but I also kind of live in Paris.’ And most managers were like, ‘What?’ But then I met the person I'm with now, who got me, and was like, ‘OK, we'll make it work. We'll figure it out. You're going to need to spend more time here, but I get it. You love Paris.’”

It wasn’t long after that she got the pilot script for Sex Lives. It’s her first big series role, following a 1999 role on One Life to Live and one episode of Royal Pains (on the film side, she’s starred in multiple shorts and appeared in Judd Apatow’s The King of Staten Island), and she’s excited to be part of a medium she’s long obsessed over. “The OC was my religion,” she says. “If somebody came into the room while I was watching, I would scream bloody murder. There's a moment in Season 2 or 3 where it's the only time both couples were together and kind of happy. I could re-watch that endlessly.”

She has no plans to give up her apartment in Paris, but now she’s contemplating setting permanent roots in her hometown. “I’ve never had my own apartment here,” she notes. “I feel very much at home in Paris, but I'm attached to New York. I really have a love-hate relationship with New York. I will talk to New York and be like, ‘You are so hard on me. You are so difficult to be around. Why?’”