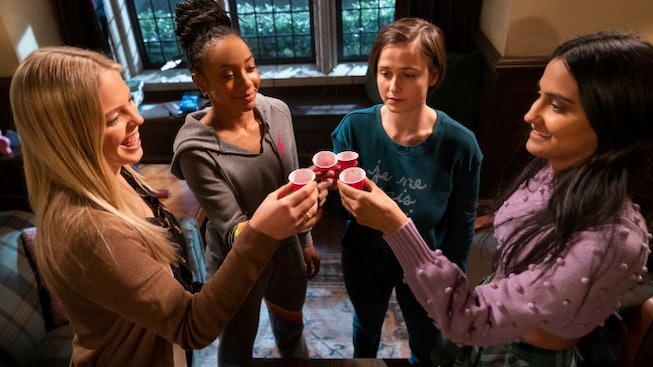 The trailer begins with the mind-numbing sound of an iPhone alarm, and shows four hungover women — Pauline Chalamet (Timothée Chalamet’s sister!), Amrit Kaur, Reneé Rapp, and Alyah Chanelle Scott — in four different beds not wanting to get up to turn it off. There’s a montage that shows partying, taking shots out of tiny red cups and making out with dudes. It feels like it’s been a minute since we’ve had some party media (cue the soundtrack to 2012’s Project X) and it feels appropriate that post-lockdown summer give us some salacious, shot-taking, vomit-on-the-sidewalk content.

According to Variety, the women all come from different background and are described as being “a bundle of contradictions and hormones,” and the show is about them bonding as they navigate campus life, relationships and hookups. Kaling says the show touches on various aspects of college life and academia: The characters play club sports, attend a “naked party,” deal with gender and race quotas at a school publication, and it even touches on Title IX and socio-economic inequalities some students face in college, she shared in a panel on September 22 . Oh, and it takes place in a “post-Covid” world, so thankfully, we won’t have to deal with plotlines about someone getting Covid from a stranger make out.

Kaling says the show — which has a writer team consisting of almost entirely women — is loosely based on hers and Noble’s experiences in college. “If I wrote from my experience, the show would be called ‘The Nonexistent Sex Life of a College Closeted Gay Boy Who’s Only Friends With Girls,'” Noble said. “And that’s just a little more niche. ”

HBO Max released the first trailer for The Sex Lives of College Girls on September 23, and followed it up on October 14 with an extended version that serves a good dose of self-aware camp, along with some very of-the-moment cultural references. The titualar college girls do very “college girl” things, like attend an ABC party (Anything But Clothes, for the elderly among us) and point out how young Joseph Stalin’s handsomeness.

“Young Stalin could get it,” one of the girls says. “Dude could have been on Riverdale.” A gulag would fit in perfectly in the already absurd Riverdale universe! The trailer also highlights a sorority rush party, filled with four girls named Ashley (all with different spellings), who received the effective burn: “I look forward to seeing you all on Selling Sunset one day.”