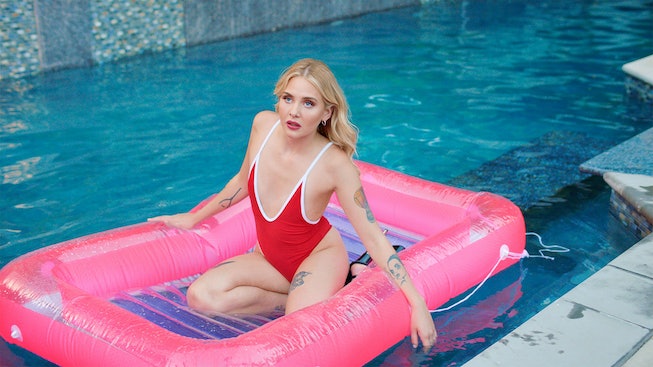 Rather, the unflinchingly complex film uses its platform to delicately explore the broader reality of studio sex work, paying equal attention to the occupation’s highs, lows, and whatevers. Traces of what Thyberg likely latched onto during her anti-porn days still abound — brutal, unenjoyable sex; abject fetishization; overt coercion; exploitative agents; overall abuses of power — but Pleasure is equally invested in inspecting the alternative experiences to better examine why the controversial industry continues to be such a draw for those who seem to love working within it.

Unfortunately, this positive experience gives Bella a false notion of what this industry can sometimes look like. In a rush to prove herself to potential casting agents, Bella decides she wants to do more hardcore work, only to find that not all hardcore scenes are created equally. In what is easily the film’s most viscerally unsettling scene, Bella endures a rough filmed encounter with two merciless men who rough her up, guilt her for temporarily trying to pull out, gaslight her into thinking that she asked for all this, and ultimately leave her in tears as she heads home. It’s a deliberately disturbing scenario that boldly resists easy answers — Bella does tell her agent (and her eventual scene partners) that she is open to and capable of handling rough sex, after all — but it’s also one that underscores the tricky tightrope Thyberg treads.

This refusal to exalt or diabolize the porn industry extends to Bella herself, who is refreshingly not painted as merely a victim of the system. This is surely a testament to Thyberg’s nuanced screenplay, but without the right actor in the role, Bella, who exists at the figurative (if not also literal) center of nearly every frame, could have still come across as a powerless cipher. Luckily, however, newcomer Sofia Kappel, in her on-screen debut, rises to the challenge, somehow imbuing her character with both a childlike sense of amazement at her surroundings and a disturbingly cutthroat mentality about what it takes to truly make it in this world.

For Thyberg, the film was also about subverting the norms of the porn genre without actually making a traditional version of it. The director achieved this in ways both practical (“I didn’t want to show [Bella’s] naked body being sexually abused. I think we’ve all seen too many naked female bodies being abused,” she says about her decision to film the sex scenes from Bella’s perspective, rather than from the usual men’s) and stylistic (in key parts of the sex scenes, the image slows and blurs — a clever trick used to show how Bella is attempting to dissociate from the moment). All tactics are used to ensure that the audience never loses sight of Bella.

To ensure that Kappel could achieve this, Thyberg knew she’d have to take extra precautions, starting by making sure the actress felt comfortable working alongside every person she would have to film with. “I was so involved in the pre-production and in the casting,” Kappel tells me, going on to explain how her big, brutal threesome scene was one of the easiest to film because she trusted her scene partners so much. “It was a huge responsibility for Ninja to make sure that I was safe and comfortable at all times, so I had a say in who I made those scenes with.”

“By the time we started shooting, [Sofia and I] had already been developing the character together for like nine months,” Thyberg tells me later. “She had probably been through like 200 auditions because I wanted her to meet everyone that we auditioned and make sure that they had a good connection and also that she felt comfortable with them.”

“Everyone keeps telling me how authentic it is,” she responds, beaming with pride. “So many people who are part of the industry and who’ve seen it have come up to me or written to me to say that it's so authentic, that I'm literally telling their exact story.”

I wonder what her 16-year-old self would say now.