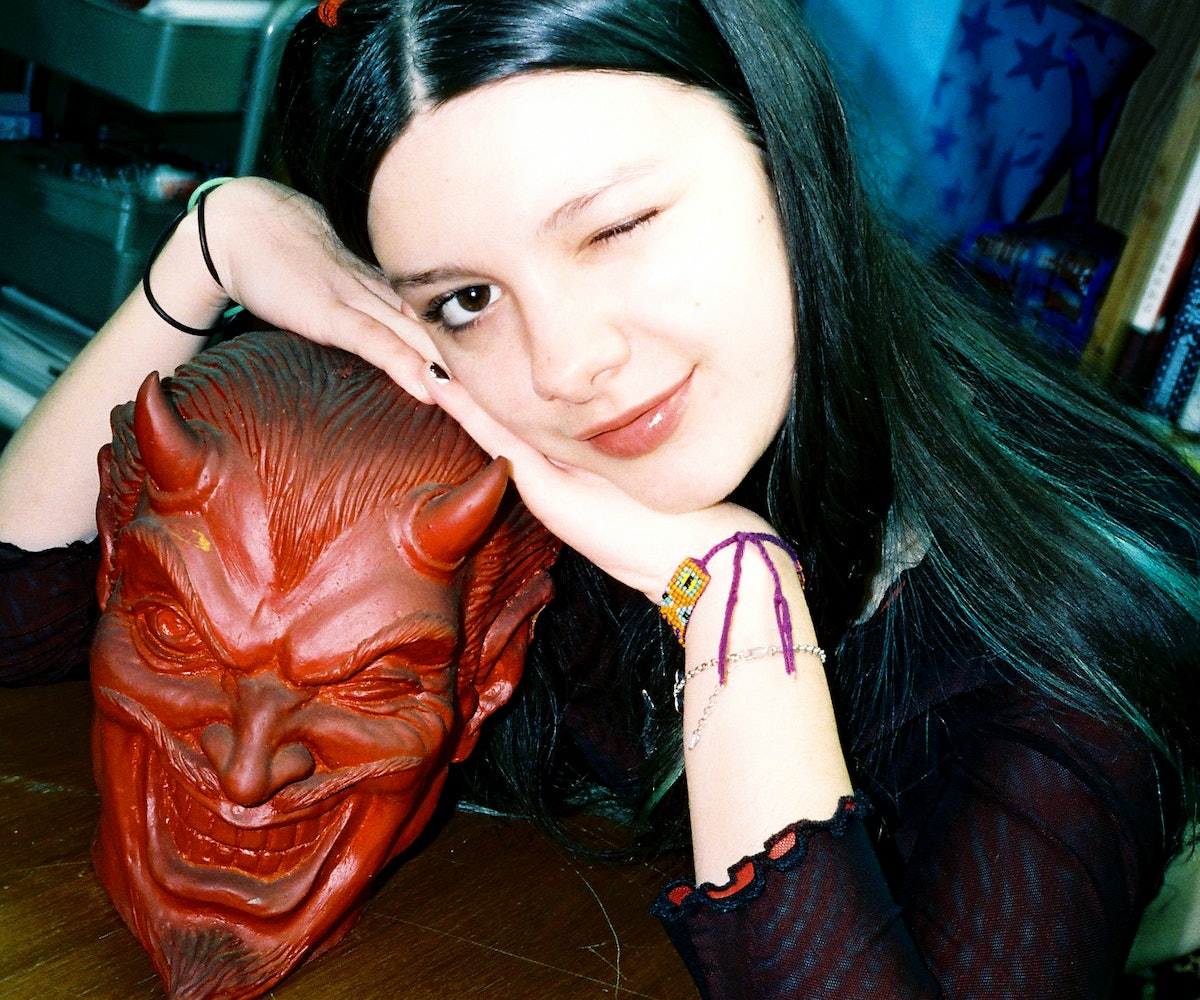 Sabrina Fuentes clicks through her computer for examples of what she’s been listening to for her Fringe and Underground music class. She wants to send me a few songs and ends up picking Japanese avant-pop artist Takako Minekawa’s 1999 record Fun 9, as well as a dizzying music video from rock outfit Paddywak, the side project of her friend and bandmate Orazio Argentero. The course is part of her curriculum at Goldsmiths, University of London, where she’s enrolled in the school’s contemporary music program. The whole thing is very much in her wheelhouse, considering her own musical origins: Fuentes has fronted the New York City-based rock band Pretty Sick as its bassist, lead singer, and North Star since she was 13.

The four-piece makes honest-to-God rock music that's energizing and sad in a way that cuts through your core with each listen. They recently put out their latest EP, Deep Divine, on Dirty Hit, a collection of seven songs that have followed Fuentes for the past decade. Some were written during her early teens (like the gnarled and heavy “Undressed,” which she wrote when she was 12), while more recent tracks offer fresher gut punches. On them, she stretches her robust vocals into commanding howls, making Deep Divine’s earworm hooks about complacency, self-destruction, falling in love, and growing up in New York resonate with damn near anyone.

Over FaceTime, Fuentes’ iPhone camera offers a small glimpse into her London life. Her walls are peppered with photos and posters and outside her window, the lush English trees still look verdant despite it being late October. It’s peaceful compared to her hectic summer of partying back home in New York, an environment that Fuentes admits was a bit too enabling.

“It's just too comfortable there, you know, for me sometimes. I get into these old habits and old cycles,” she says, fiddling with a sparkly heart-shaped ring. “They become harder and harder to break the more I indulge them. As much as I love New York, it's nice to take a break every once in a blue moon.”

Fuentes, now 20, grew up on Manhattan’s Upper East Side, but you’d be forgiven for thinking her home base was 60 blocks downtown, give or take, in the Lower East Side. The neighborhood became her stomping grounds and the foundation for Pretty Sick, which she started with her childhood best friends Ella Moore and Eva Kaufman. The band’s downtown presence solidified over the years through steady gigs, and when Moore and Kaufman eventually moved to different states for college, they did so with encouraging words for Fuentes to keep Pretty Sick alive.

The current iteration of Pretty Sick came together in the true-to-New York way of friends-of-friends and chance occurrences. Fuentes met guitarist Wade Oates through filmmaker and photographer Richard Kern, and the two began performing together with a drum machine. (Fuentes moonlights as a model through downtown management du jour No Agency, for whom Kern frequently shoots.) One night after opening for experimental jazz outfit Onyx Collective, drummer Austin Williamson approached Fuentes and Oates with an offer to join the band. Not long after, Fuentes met Argentero as classmates at Goldsmiths, and their fast friendship led to him joining Pretty Sick as the second bassist.

Fuentes lights up speaking about her bandmates, from Oates’ ability to spin anything into a catchy chorus, to Williamson’s drumming talent, to Argentero’s vast knowledge of punk and rock history. “Everybody brings so much,” she says. “It's such a collaborative process and it would be so different without any member. They all have such a smart sensibility when it comes to music that really makes it so fun and so exciting to work with them all the time.”

Listening to Deep Divine, one may notice that biblical references tend to creep into Fuentes’ songwriting, an unintentional side effect of her attending an all-girls Catholic school growing up. “Superstar,” with its melancholy bassline and puppy love yearning, flirts with praise and devotion, before floating off into an ethereal guitar solo. While the gritty single “Angel Landing” finds Fuentes lamenting through guitar fuzz: “I speak in psalms but I am trying to learn/ A modern vernacular for my health.” The song’s hook was also originally meant to include a line about a guardian angel landing on her shoulder, but Fuentes ditched the idea when the line proved too difficult to sing live. The band instead seemingly compromised with angel costume accessories in the Maggie Lee-directed lo-fi music video.

“I'm so hardwired to think [in religious references],” she says. “Even songs I write now, I thought that was going to be something that I outgrow. And I was always like, ‘Eh, I got to use up all these biblical references, and then eventually move on before I beat this horse to death.’ But it just keeps happening.”

Fuentes is also a major romantic, as foretold by her astrological sign, Pisces. Deep Divine is rife with moments where she turns otherwise mundane details into daydream-worthy interactions. For “Undressed,” Fuentes turns the thought of dressing someone’s wounds (“That's really romantic,” she adds, “Not literally, but it’s poetic”) into its final, sexier form of undressing someone new. On “Telephone,” a basic question is dramatized by Fuentes’ soaring vocals. “I just want to know are you happy with him? / Are you happy with him?” she sings, beckoning an answer. It’s the only track written exclusively by Oates, who says it’s about a friend, but Fuentes has her own theories. “I like to imagine it's more romantic,” she says with a smile.

Fuentes has long made peace with the fact that Deep Divine is dropping at a moment with no promise of live shows. Her favorite way to listen to music is walking around, after all, and she hopes the record will soundtrack a few wistful strolls in the months to come. Maybe even around to the Lower East Side, where the EP’s raucous and bittersweet ode to the neighborhood, “Allen Street,” finds its real-life origins. “Nothing’s gonna last for-ev-er!” Fuentes yells on the hook as the song descends into a screech of sharp-as-nails guitar. For a few minutes, it makes the typically unsettling notion of everything, everyone, everywhere eventually ending seem not so frightening. It’s pretty sick if you think about it.

Deep Divine is out now via Dirty Hit Records.

NEXT UP
Entertainment
Maneskin's "Supermodel" & 9 Other New Songs Out This Week
Entertainment
The 5 Must-Listen Tracks From Kendrick Lamar's 'Mr. Morale & The Big Steppers'
Entertainment
Harry Styles' Music Video Evolution From "Sign Of The Times" To "As It Was"
Entertainment
Sky Ferreira Teases New Song “Don’t Forget”