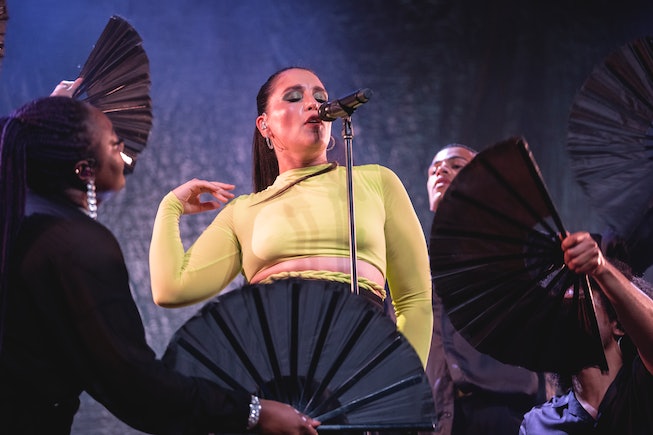 Primavera Sound returned with a vengeance in 2022. Over 10 hot days in June, nearly half a million people descended upon the Barcelona seafront festival to experience its biggest and baddest edition yet. The typical one-weekend event now stretched to two (with Primavera La Ciutat, an additional week of concerts throughout the city sandwiched between); the usual lineup of eight headliners nearly doubled to 17; the sun felt like it shined brighter and hotter, and the cerveza poured sweeter. It was an undoubtedly triumphant return for the rising international music event following two years of cancellations. Those who know, know that Primavera Sound began the same year as Indio’s Coachella in 2001, and after this year’s edition, it might have just reached that level of notoriety, too.

The 2022 festival was special for another reason: it marked Primavera Sound’s 20th anniversary. In the two decades since it was conceived as an outdoor, one-stage indie fest, it’s obviously undergone drastic changes. Star-powered acts like Tame Impala, Yeah Yeah Yeahs, The Strokes, Dua Lipa, Lorde, and more now grace its stages, and organizers are nurturing Primavera offshoots in cities across the world, including Porto, Portugal and Los Angeles. Despite that, the fundamental ethos of the festival remains the same. Created as an outdoor haven for music lovers and ravers, the quintessential Primavera stage — that of a radiating outdoor amphitheater under the stars — still reigns supreme. This year, that stage was Cupra, located at the very center of the festival and host to some of the year’s best top-tier acts: Slowdive, Playboi Carti, The Smile, Jessie Ware, and more. As its international attendees roamed up and down the seafront hopping from each of the site’s eight main stages, they always seemed to converge back there, the heart of the festival — and this year’s best stage, according to the many people I asked. When you got there early enough to snag a seat on one of the amphitheater’s generous cement ledges after five hours of walking and dancing, cold drink in hand, there was nothing more satisfying.

While a host of organizational issues plagued the first weekend of the festival, weekend two meandered by with fewer hiccups. Revelers — largely in functional, classically festival fits — lit cigs, perched on steps looking out on the water, and danced with an energy that never seemed to fade even as the sun was rising and the last acts of the night were finishing up. Artists fed off of that electricity, too, somehow also knowing there was something special about this year’s event. Whatever the case, these six performers delivered sets that exceeded expectations, perhaps proof that absence does make the heart grow fonder — and the body dance harder.

All hail 100 gecs. The hyperpop duo wasn’t the intended headliner for PC Music’s Primavera La Ciutat showcase, Acid Angels, but they may as well have been. Dylan Brady (in his six-pointed wizard hat) and Laura Les didn’t take the stage until 3 a.m., but at no other point in the night was the room as rowdy, chaotic, and positively electrified with energy as during their set. Live, their chaotic, random, and irreverent brand of pop music is still exactly as it sounds, but with a huge added dose of playfulness. “This song is about Doritos,” Les deadpanned to the audience in AutoTune before the group launched into “Doritos & Fritos.”

Nothing was serious, so it was permission for everyone to get as wild as they wanted; people crowd-surfed across the room, and there was nothing more thrilling than flailing to a song about getting your tooth removed. Ever since 100 gecs debuted, critics have profusely waxed intellectual about their music — what it means for pop, what it means for the internet age, whether it’s supposed to be ironic. But who actually cares? All I know is at the end of their sweaty 30 minutes, not a soul was left unconverted.

Playboi Carti’s live show has changed drastically over the last few years. At Governors Ball in 2019, the Atlanta rapper appeared onstage in regular daylight, bopping along to his tracks in skinny jeans with his entourage and doing very little actual rapping. In 2022, at Primavera’s amphitheater stage, Cupra, he still doesn’t do much rapping (and still shows up 40 minutes late), but now there’s a permanent wall of fog and dramatic light — through which he stalks, growls, and agonizingly howls — ominously rolling through the stage, and a seizing, tangible sense of performance. Ever since the release of Whole Lotta Red, Carti has clearly been taking his role as vampire king seriously, fully embodying a tortured creature of the night in his much more amped live shows to impressive effect. Somehow, through that skinny body (which he drapes in saggy jeans and a jacket), he can emit a body-hollowing shriek, a skill he shows off constantly now during the show in lieu of rapping. No longer bopping, he moves jerkily and strangely, a sight that feels all the more spooky shifting in and out of the white smoke.

His songs are preluded with operatic rock intros (courtesy of the sole guitarist on stage with him), adding a distinct Halloween-esque theater vibe to the whole thing. But the best part is the rap still hits as hard, and maybe even harder. When after all the theatrics the beat for “Sky” comes barreling in, you can’t help but want to expel all your demons, too. The one critique you might have is that you’ll hardly get a glimpse of the real Carti the entire show — but who would want to ruin it all with reality.

I’ll say it: Lorde is the ideal summer headliner. At this point in her career, the 25-year-old is a veteran, skilled at working a crowd of thousands with ease. Stepping onto Primavera’s massive headlining stage at dusk with the glow of an orange sun radiating behind her, she only brought joy and the energy of summer throughout the entirety of her 90-minute set. She played the hits — “Green Light,” “Supercut” — and the older hits — “Royals” and “Ribs,” revealing how much her voice has matured. Her stage setup of rotating sculptural platforms was grand and surreal in the setting light offering a stunning playground for her running and dancing, which is comfortingly still strange and twitchy. Fans might’ve worried that the lukewarm reception of Solar Power would have diluted her power, but they’d be gratefully mistaken. Swaying in the warm night breeze as she closed her set with the title track, it all suddenly made perfect sense.

It may seem like pulling the short end of a stick to see Grimes deejaying her festival set, but it has its own delightful merits. The second she walked out on stage — long blonde hair with fiery neon green tips blowing in the wind, wearing Marine Serre tights and a billowy mini dress — it was clear the night was gonna be spacey, hard, weird, and iconic. It was. For the hour-long set, Grimes largely dwelled in the trancey vibrations of bass house but pulled in a surprising selection of wide-ranging samples: Prince’s “When Doves Cry,” Doja Cat’s “Moo,” Enya’s “Orinoco Flow,” and Vivaldi. At one point deep into the second half of the set she stopped the music to blast the intro of Mariah Carey’s “All I Want For Christmas Is You,” which made the crowd go absolutely feral. (What can we say? We love her troll side.)

Under the blue light with her hair flying in the wind, at times working the boards while fully crouched on top of the table, Grimes made it feel like there were no rules. For that, purists might claim she isn’t a real DJ, but I’d say that’s all of the appeal.

For many people, The Smile — the new band composed of Radiohead’s Thom Yorke and Johnny Greenwood — is the platonic ideal of a festival set. There’s sufficient reason; the two legendary musicians are first and foremost master instrumentalists, capable of creating a mesmerizing set built on a tremendous show of technical skill. Appearing on stage in a hazy fog around midnight at Primavera’s Cupra stage, Yorke, Greenwood, and drummer Tom Skinner, built their heady, funky, and hypnotizing tracks seemingly layer by layer. Songs like “The Same,” radiated from the stage like a natural sonic high and their wriggly and funky melodies echoed wonderfully through the amphitheater. It’s everything you’d want from a Radiohead show, but pared down and looser, more fun.

Plus, it’s always a privilege to watch experts do what they do best. Yorke and Greenwood traded instruments throughout the night, and Greenwood even hopped on a harp for a song. No dances or fire balls were found here, but that’s more than just fine sometimes.

Jessie Ware dropped one of the best disco albums of 2020. What’s Your Pleasure? brought suave, sparkling, and sophisticated disco for people looking to swim in the genre outside of pop’s sugary adaptation of it. Its best songs, “Spotlight,” and “Save A Kiss,” could easily simultaneously bring you to euphoria and tears on the dance floor.

At the Cupra stage on Saturday, Ware brought that same bold yet restrained air to her performance, which packed out the stage to the point where any late stragglers were out of luck getting even a glimpse of her in her sleek neon yellow getup. Supported by a diverse crew of dancers dressed in black, she curated a performance that was more artful than bombastic, leaning into the subtleties of fans and tight choreographed movement to bring out the rhythmic power of her songs. Not that she even needed that; the crowd pulsed alongside her regardless, aching to move. Still, it was one of the tightest, most seamless performances of the weekend, executed with sleek elegance and finesse. The return of disco doesn’t mean it has to only be relegated to throngs of young people only familiar with the new vanguard; it can be grown up, too, and still bang just as hard.