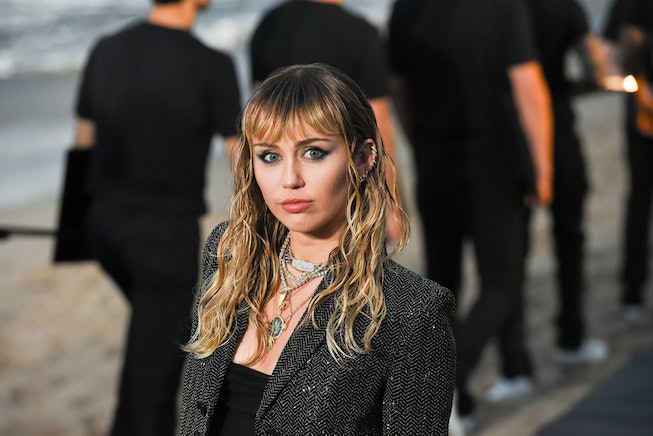 Oftentimes when celebrities interview each other for magazine features, the end product is one to two thousand words of filler. Such was not the case for Miley Cyrus and Rick Owens, who had a rather enlightening conversation for Interview. First, Cyrus revealed she's working on a Metallica cover album, saying: "We've been working on a Metallica cover album ... We're so lucky to be able to continue to work on our art during all of this. At first, it felt uninspiring and now I’ve been totally ignited." Later, she claims that she was traumatized from a possible UFO encounter in San Bernardino.

“I was driving through San Bernardino with my friend, and I got chased down by some sort of UFO,” Cyrus said. “I’m pretty sure about what I saw, but I’d also bought weed wax from a guy in a van in front of a taco shop, so it could have been the weed wax. But the best way to describe it is a flying snowplow. It had this big plow in the front of it and was glowing yellow.”

The subject of extraterrestrial encounters wasn’t exactly a non sequitur. Owens was discussing his partnership with Moncler earlier this year, which involved him and his wife traveling around the desert in a decorated tour bus and making stops to places like Area 51.

“I’ve always been very skeptical about the collab situation. Under the worst circumstances, it’s an obvious marketing gimmick,” Owens said. But [Moncler has] been doing really creative, extravagant, kind of reckless things. Besides that, I’ve opened up a lot recently, because I’ve been reclusive and insulated long enough. It’s a great way to get out of my little shell. But I only agreed to do it because I wanted a tour bus. I wanted to do an insulated tour bus that was a pure aesthetic expression, like a space capsule or a submarine that would get me from point A to point B in the States.”

Read the rest of Cryus and Owens’ conversation over on Interview’s website.