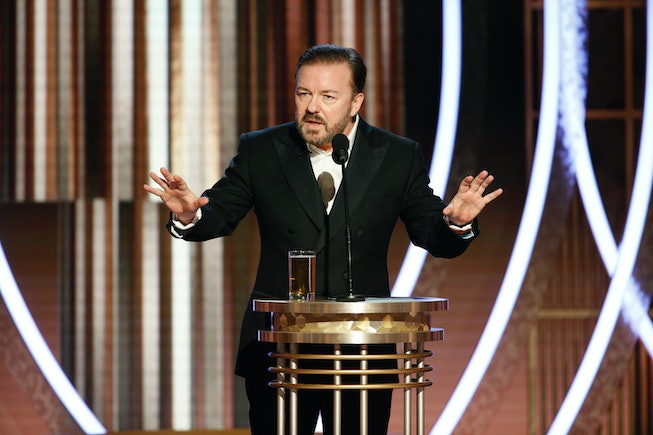 Netflix is caught up in another comedy scandal. Following Dave Chappelle’s widely-criticized set in October of 2021, the streamer has aired yet another controversial stand-up set. This time, the comedian in question is Ricky Gervais, whose performance included several comments targeted at the trans community.

Following its premiere, GLAAD, the media monitoring organization, released a statement condemning Gervais’ show. “We watched the Ricky Gervais ‘comedy’ special on Netflix so you don’t have to,” they wrote. “It’s full of graphic, dangerous, anti-trans rants masquerading as jokes. He also spouts anti-gay rhetoric and spreads inaccurate information about HIV.”

The organization then addressed Gervais and the streamer directly, saying, “Attention Ricky and Netflix: people living with HIV today, when on effective treatment, lead long and healthy lives and cannot transmit HIV to others.” GLAAD then proceeded to highlight Netflix’s content policy which claims to protect viewers from harmful content. “Netflix has a policy that content ‘designed to incite hate or violence is not allowed on their platform, but we all know that anti-LGBTQ content does that exactly,” they wrote. “While Netflix is home to some groundbreaking LGBTQ shows, it refuses to enforce its own policy in comedy.”

During Gervais’ set, he speaks about “real women.” “Oh, women!” he says. “Not all women, I mean the old-fashioned ones. The old-fashioned women, the ones with wombs. Those f***ing dinosaurs.” He continued, “I love the new women. They’re great, aren’t they? The new ones we’ve been seeing lately. The ones with beards and c***s. They’re as good as gold, I love them.”

Towards the end of his set, Gervais, who hosted the Golden Globes in 2020, clarified that he “supports” queer rights before making another bigoted comment. “Full disclosure: In real life, of course, I support trans rights,” he said. “I support all human rights, and trans rights are human rights. Live your best life. Use your preferred pronouns. Be the gender that you feel you are. But meet me halfway, ladies: Lose the c**k. That’s all I’m saying.”

Later in GLAAD’s statement, the organization warned Netflix about continuing to promote hate speech on their platform. “The LGBT community and our allies have made it very clear that so-called comedians who spew hate in place of humor, and the media companies who give them a platform, will be held accountable,” they wrote. “Meanwhile, there are PLENTY of funny LGBTQ comedians to support.”

NEXT UP
Culture
Phoebe Dynevor Will Not Return for Bridgerton Season 3
Culture
Netflix Is Seriously Cracking Down On Sharing Passwords
Culture
Succession Season 4 Trailer Explodes With Family Drama
Entertainment
Emma Chamberlain Is Officially Moving to Spotify On February 23 (Exclusive)
Style + Culture, delivered straight to your inbox.