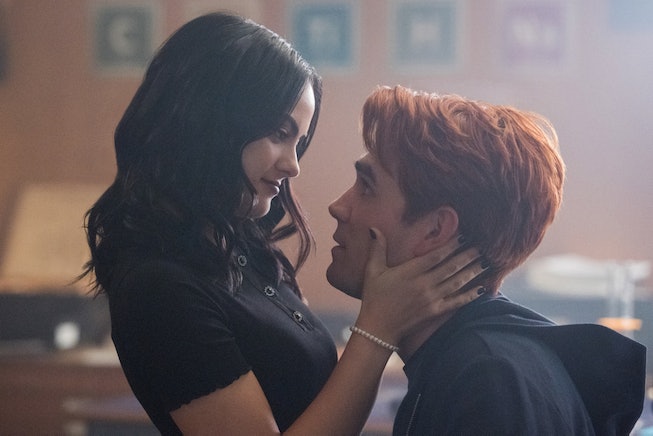 Every Hollywood production is (rightfully) falling over itself to prove that they're taking COVID-19 safety precautions as serious as possibly. Riverdale is no exception, and as a show that is built on teens taking quick breaks from sleuthing to passionately make out, they've added some strict kissing safety protocol to protect the actors from possible transmission.

The technique at play is thorough mouth rinsing done with the expertise of a meticulous dental hygienist. “Our new normal is washing our mouths before every take of a make out scene,” explained KJ Appa alongside a video of him and Riverdale love interest Cami Mendes throwing back what appears to be mouth wash. It's just like they're partying in a speakeasy-slash-cabaret run by an affluent high schooler, but with higher stakes!

The two vigorously swish the liquid for one of the longest minutes ever recorded as a voice off camera gives time updates. Eyes glaze over, garbled conversations are attempted, nods are exchanged, and entire lifetimes are lived before each spits out their respective liquid into a Ziploc baggy in what is most likely another layer of COVID-19 safety.

The kissing procedure is one of a slew of new rules for the show. NYLON It Girl Lili Reinhart shared how the cast was mandated to stay put in Vancouver until filming officially wraps in December, while Vanessa Morgan detailed how she's required to take a COVID-19 tests three times a week. It's all very intense, but on the bright side, at least everyone's breath is fresh as hell.