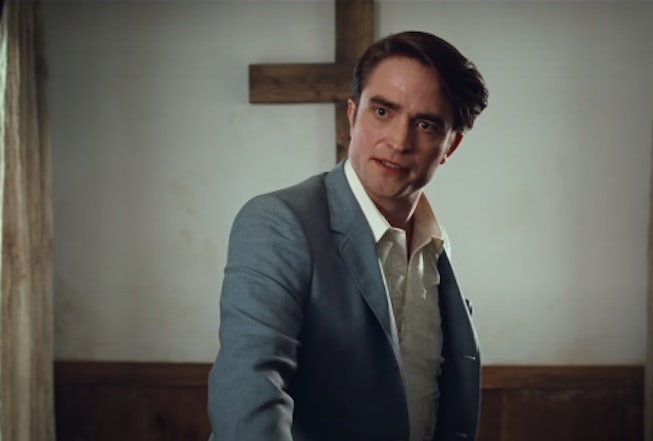 Based on Donald Ray Pollock’s 2011 debut novel, the film boasts a stacked cast with Robert Pattinson, Tom Holland, Jason Clarke, Riley Keough, Sebastian Stan, Eliza Scanlan, Bill Skarsgård, Mia Wasikowska, Harry Melling, and Haley Bennett. And in case the the title didn't tip you off, many of the characters are evil.

The story takes place in Knockemstiff, Ohio and its neighboring backwoods where sinister characters — like Pattinson's unholy preacher, twisted couple Clarke and Keough, and Stan's corrupt sheriff — zero in on Holland's Arvin Russell (Holland) as he he fights tooth and nail to protect his family from evil.

“It was a hard book to adapt also because there was so much that we loved,” Campos told Entertainment Weekly earlier this month regarding the film adaptation. “I’m a big fan of southern gothic and noir and this was a perfect marriage of the two. Sometimes you might be adapting a piece and you think like, Well, there is a seed of a good idea here and I’ll just throw everything away and start from scratch. In this case it was like, we love everything!”

Watch the eerie trailer below and stream The Devil All The Time starting September 16.