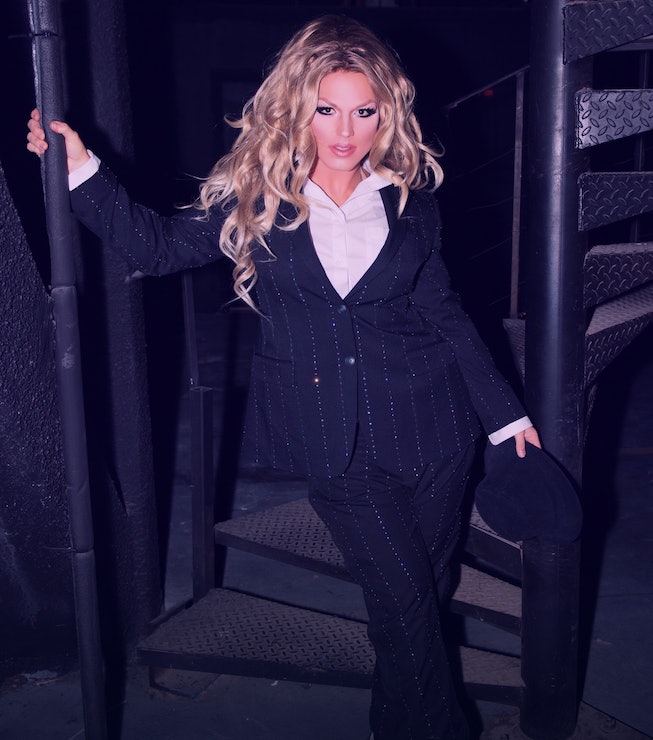 Every week, NYLON writer Michael Cuby will conduct an exit interview with the queen eliminated from RuPaul's Drag Race All Stars Season 5. This week, Derrick Barry was asked to sashay away.

Of the 150+ queens to appear on RuPaul’s Drag Race, only a few sashayed into the Werk Room as celebrity impersonators. In Season 4, there was eventual All Stars 1 winner Chad Michaels, whose Cher impersonation has rightfully received the approval of the Oscar-winner herself. The following season introduced us all to Coco Montrese, who has been performing as Janet Jackson for over a decade. And finally came Derrick Barry, a Britney Spears impersonator who made it all the way to the top five during the show’s eighth season. Witty and talented, she had a memorable stint on the series, but in the end, her inability to shine as Derrick (and not Britney) was her undoing. When she finally returned to our TV screens four years later as part of the All Stars 5 cast, everyone was wondering: Would she finally be able to shake off Brit?

Answers to that question will vary depending on whom you ask. For her All Stars entrance, Derrick opted for another Britney look — two, if you count the reveal. However, the Las Vegas showgirl surprised many when she performed a set of impersonations for her talent in the All Star Variety Show. Unfortunately, her rapidfire impersonations failed to impress the judges, and ultimately, she landed in the bottom two, while fellow competitor (and rival) India Ferrah won. Per the season’s new twist, India went head-to-head in a Lip-Sync-For-Your-Legacy against secret lip-sync assassin Yvie Oddly, and after demolishing India with her otherworldly flexibility, the Season 11 winner announced that the group had collectively decided to send home Derrick.

A week after her elimination, NYLON hopped on the phone with Derrick Barry to talk about going home first, the similarities between herself and Coco Montrese, her feelings about her beef with India Ferrah, and why she looks up to reality TV legend Tiffany “New York” Pollard.

In your own words, what went wrong this episode?

Oh gosh. I think, sometimes, even though people want to see someone do something different, when they do, it’s not always easy for them to see them in that light. So, as an impersonator, people are obviously ready to see me do Britney. It’s what I’m known for. Obviously, doing impressions is still in the form of “impersonation,” but I think a lot of people wanted to see me either sing or dance or do something they’ve seen me do before. I feel like the best place to take a risk is on the Drag Race stage and I wouldn’t change anything because I do think that that is an ability that not everybody can do. We see that on Snatch Game, even; some people can’t even do one impersonation. So I just wanted to show that, as an impersonator, there are other things that I want to do as well.

One of the biggest twists of this season was how the eliminations are going to be handled. What was going through your mind when you heard about it?

I had no idea what was even happening. I thought... what? Who are they bringing in? Are people then going to compete if they win? Is it a revolving door and you have to keep making it to the next round and new people can come in and other people can get voted off and they’re not in the competition? I mean, I don’t think any of us understood it right away because it was such a twist to bring back previous lip-sync assassins. Even having Yvie come back, who’s a winner, was shocking. I was like, What is she doing here right now? Is she competing if she wins? Just hearing Ru explain was confusing and completely caught us off-guard because we were so used to All Stars 2, 3, and 4 being the same without any crazy switch-ups. But as they explained more, it was a lot easier to understand.

You were confident that India would have sent you home if she won, but were you surprised that your fellow contestants also felt the same?

I was, only because I had talked to a couple of them and I thought they would be on my side. Cracker was one that I thought would keep me there, but Mayhem is her Season 10 sister. I didn’t really know how people voted because we all walked in individually to cast our votes. I think Blair said something about how she wanted to keep me there. But again, you can change your mind at the last minute, and Mayhem was also on Blair’s season.

I was happy to find out that Jujubee would want to keep me there because she was part of the reason I did Celine Dion. So to see that Juju didn’t change her mind, and for her to voice that opinion in front of the girls took a lot of guts. So many people think, “Well, he dressed up as Britney and did impressions,” but I dressed up in drag and did impressions. It’s not my fault I look like Britney.

Did you ever imagine that you’d be the first one out the door?

You know what’s funny? When Coco Montrese originally competed on Drag Race Season 5 and when I originally competed [on Season 8], we both made top five, and we joked that we were each other. I’m the Coco Montrese, she’s the Derrick Barry, and all that. And then it played out the same way for All Stars! To see Coco do some dance routine I had never seen her do and go home, I was like, oh my god. That’s awful. What a terrible feeling to go back after making top five and then get sent home [first]. But that was an obvious… I don’t want to say fear, but it was an obvious reality for me going back in — that no matter what I do, these girls are going to say, “All he does is Britney. That’s all he’s done since Drag Race.” I had to be okay with that fact.

So I went back and entered as Britney, thinking, just in case anything crazy happens, at least I got to show my updated Britney, which is really what I travel the world and do. I actually do it at Drag Race Live! as my actual talent number in a Werq the World-type talent show.

Most of your storyline this episode was dedicated to the beef you had with India Ferrah. How did it feel when you landed in the bottom and India was not only in the top, but actually ended up winning the entire challenge?

I mean, that’s when reality sinks in. It’s now real. It’s a competition-based show and they saw something from India that they were looking for and I’m okay with the fact that it happened that way. Obviously, there’s nothing I can change. It’s just one of those things that sucks, but at the same time, if I would have come in and been extremely nice to her and acted like nothing was wrong, then I’m no better than her. So I’d rather go in and be as real as I can and hope that that shines through. I’m happy I did. Of course, I could have just walked in and played nice and focused on the challenge and maybe there would have been a different outcome. But I don’t think there could have been because I didn’t forget my impersonations or part of my script that I’d written. So, to be in the bottom with two other competitors that either forget their lyrics or their dance moves, it was shocking for me. It was a complete surprise.

Do you regret that so much of your brief stint on this season was about this old beef?

No, because this is reality TV. I watch Real Housewives franchises — especially Beverly Hills and Atlanta — and I live for that moment where somebody addresses somebody to their face. [Drag Race] is not a pageant where we have to be smiling and the judges are critiquing every little move that we’re doing. I have to enjoy the reality TV side of it too. I’m very inspired by Tiffany “New York” Pollard and I love that she speaks her mind and is completely outspoken. Not everyone will agree with her, and they’ll think that she went too far, but they can never call her fake. And that was my number 1 thing: If I’m going to be doing reality TV, I’m going to keep it as real as possible.

All Stars is all about showing how much you’ve grown since your original season. What were you most excited to show the world in terms of how your drag has evolved?

I was most excited to show that there were other aspects of my drag that I’ve explored on Wait, What? or ASMR Queens, or even The Haters Roast tour that I did, where I didn’t dress up as Britney. I just did my own drag and got to put my own personality out there. So many people think, “Oh, well you look like Britney and that’s all you do,” but I need to make sure that people understand that for me not to look like Britney, I would have to change my face, and I’m not going to do that. I didn’t have plastic surgery to look like her, but I’m also not going to have plastic surgery done to not look like her. I wanted people to see that, okay, yes, he looks like Britney but this is not a Britney look. Britney’s never worn it, so this is obviously Derrick Barry’s drag. If I would have worn a different color hair, people are still going to say that I look like Britney. If I put a pink wig on, I’m screwed. A red wig, a black wig, a brunette wig, any color hair is going to tie into some Britney look. No matter what, I look like her.

What was the biggest difference between All Stars and your original season?

Well, gosh. I walked in as Britney twice. I did what I thought was well in the reading challenge just like the photoshoot challenge. So the biggest difference was landing in the bottom for the first challenge vs. being in the top the first challenge on my original season. I was even scared my first challenge because I had done a Britney look and I had done blonde hair. It was scary because I didn’t know what the judges were going to say — if they were going to say, “Okay, all you do is Britney,” and Michelle did that right away. But this time, landing in the bottom was very different from what happened in Season 8. So I guess the biggest difference is that I went home.

Who are you rooting for to win All Stars 5?

I said it there that Jujubee is going to be my queen. From Day 1, I imagined myself with her in the top 3 or 4 or however they do it on All Stars, and I’m keeping my vote with her because she is just one of the kindest people I’ve ever met and I have a lot to learn from someone like Jujubee. In any situation, she can make somebody laugh. She can pick the tone and not make it so serious and she is really doing drag and having fun. I think we’re already seeing her evolution as a queen: she’s singing, she looks amazing, and she is just a light. When I walked in that room and saw Jujubee, I just got so excited. I gravitated right towards her, stood next to her, held her hand, and I remember saying how happy I was that she was there.