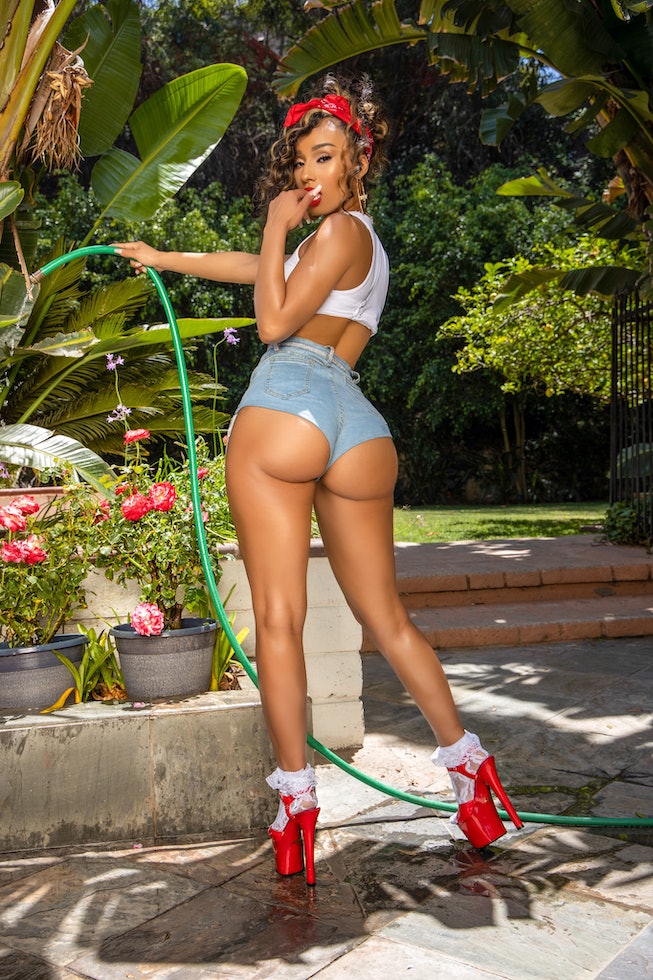 At 23, Rubi Rose has already been a part of a momentous moment in pop culture as a co-star in Cardi B’s viral “WAP” video. Now, the Kentucky native and Georgia State graduate is carving her own path within the industry. With her distinct raspy voice and hard-hitting bars encouraging women to create their own playbooks — already praised by Cardi B — Rose is not only dominating her own lane, but actively changing the rules of the game.

With her 2019 hit “Big Mouth” surpassing 15 million views, and the more recent “He in His Feelings” in heavy rotation on Spotify, the multi-talented rapper’s music encourages girls to tap into their inner bad b*tch and own every bit of their sexuality, unapologetically. And if there’s anything that the release of her latest single, “The Truth,” and recent “Nasty” collaboration with Mulatto and Flo Milli prove, it’s that she isn’t slowing down anytime soon.

Having grown up in Kentucky in a matriarchal Mormon household with three sisters, Rose also has a one-of-a-kind story to tell. A proud first-generation Eritrean woman, Rose’s foundational roots and time spent traveling when she was young helped shape the strong person and artist that she is today. Even as her fame rises, Rubi makes sure to stay grounded and level-headed by maintaining a healthy balance of downtime in her house, exploring nature, or indulging in her love of food.

Ahead of her latest virtual performance at Rolling Loud, NYLON caught up with Rose on a Zoom call to discuss her upcoming debut album, being a voice for women in hip-hop, and the importance of representation within the industry.

Before you were known to the world as Rubi Rose, what was life like for you as a young kid growing up in Kentucky?

It was very different, as far as the things that I prioritized and cared about. I was really into sports. I was a cheerleader, and I did track in school. I always liked music, but my environment at the time made me care about certain things. I was in high school and middle school, so I only cared about sports, school, and fitting in with the white kids. When I was like 10 or 11, I lived in Switzerland for a bit. It was beautiful. All my cousins and stuff lived there, so every winter and summer, we would go spend it with them, but it was pretty different. I went to a boarding school, so I got to meet people from all different ethnicities, it was cool. After I moved to Atlanta is when I tapped into doing music. I came to ATL my junior year of high school. It was a really big culture shock, but I loved it. I love the culture. I loved my people: our food, our music, our aesthetic, everything. So it was a pretty easy and natural switch. Super welcoming.

As an Eritrean woman, right now you are really an incredible source of representation for Habesha girls in the rap game. How would you say the culture you grew up in influenced you?

It definitely influenced who I am as a person. My mom is African and I'm first generation, so I grew up really strict. We did go to traditional Eritrean gatherings, but we were more so raised with American religion; I grew up Mormon. As far as my music, I do want to eventually incorporate some Afro-beats or even some language, but I haven't done that yet.

You have two sisters. Did growing up around all women make you comfortable in owning your femininity and sexuality?

Definitely, like you said, I am more comfortable being around women. On the other hand, I think with my mom being so strict, like, I wasn't allowed to be around or have a boyfriend-type thing or even have sleepovers with girls in general until I turned 18. So that made me more curious and it made me start to wonder. It made me very curious about guys and I wanted to know — “Why is it a secret? What's going on?” It affects my music in some ways too.

A lot of your songs are about women taking control and just not giving a f*ck what people think. Do you have advice for girls who are looking to develop their confidence after growing up in environments where they’re told to shrink themselves to appease other people?

You just got to be unapologetically you. It's hard to do, it's easier to say, but once you start saying it and manifesting it and living in it, just be raw and be you and don't give a f*ck about what other people think. Because at the end of the day, you can be covered and they're going to still have something to say, or you can be naked. So do whatever makes you happy.

How would you say you use your music as a weapon to fight back and speak up?

Whenever I rap and be in the booth, I tap into my Sasha Fierce ego. Naturally, I'm a sexual being and music in general is pretty explicit. So, most girls and even myself, when I listen to my music, it makes me have a give-a-f*ck, confident-in-it type thing. And I know a lot of girls do too because whenever they rap and say this sh*t or tweet my lyrics, they talk about how it gets them out of whatever mood that they're feeling. Music makes you feel something.

"At the end of the day, you can be covered and they're going to still have something to say, or you can be naked."

I also heard you majored in political science. What sort of future work were you looking to do with the degree?

We’re excited for your debut album! What can we expect?

It's going to be my debut album, so I want to expand it. I don't want to just do aggressive pussy talking; I want to tell y'all some of my stories and what’s really happening in my life. I just want to make music that people can feel and resonate with.

Who would you say have been your most influential musical inspirations throughout the years?

Well, I love Prince, Michael Jackson, love Nicki [Minaj], love Cardi B, love Megan [Thee Stallion]. Honestly, all the new girls in rap are inspiring. All these girls are fire!

Speaking of, how did it feel for you to be a part of that pop culture moment like “WAP”? What are your thoughts on the current landscape for women in hip-hop?

I was just h*lla thankful that I could be included in the video and that Cardi thought of me. Because she said that she chose girls who she thought were the upcoming females of rap, so the fact that she knew who I was and cared enough to put me in the video gave me a lot of confidence and made me feel really good about myself. I think it's a really good time for females and rap and hip-hop right now. This is the first time in a long time where multiple girls are getting shine, specifically rappers. So, I think this is a good time for all of us.

You’ve accomplished so much, from releasing “Big Mouth” to performing at Rolling Loud. What would a young Rubi who grew up in Kentucky think of where you are right now?

It’s just so crazy. With "Big Mouth," and honestly, with every single one of my songs, I'm like, "This is the one." But when it did what it did, I was just in shock. Literally the day after I dropped it, all the labels were calling me asking me to see me and so it was crazy and I'm happy it happened so fast.

You want it and you think, and you envision it, but you don't believe it is actually going to happen and it's happening, but I don't know. I remember going to Rolling Loud with my ex and now it's like I'm getting paid to do the same thing. It’s a good feeling.