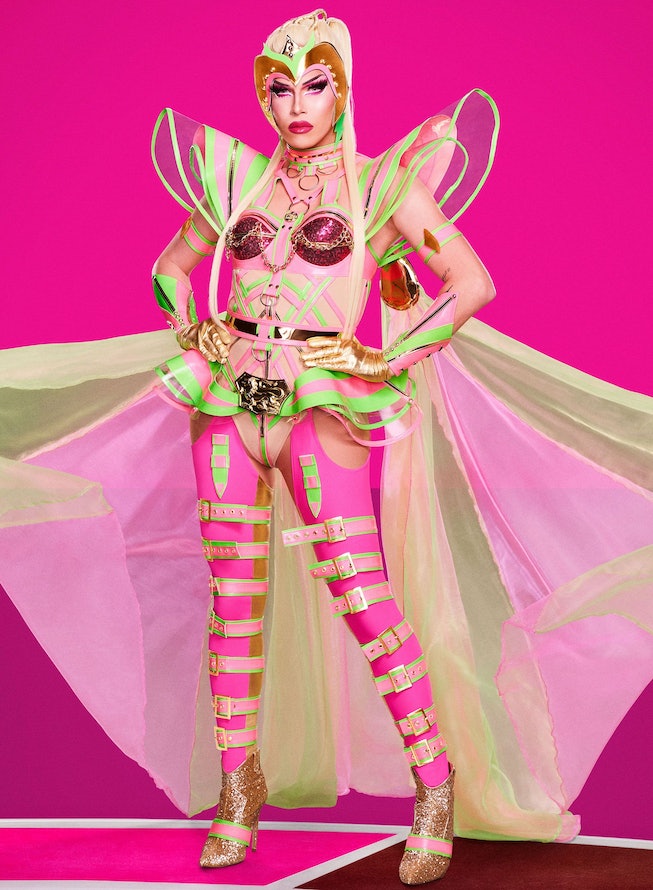 Every season, one contestant from RuPaul’s Drag Race is informally crowned the “Trade of the Season.” However, it usually doesn’t happen in the first episode. But that all changed in season 14 thanks to the arrival of Alyssa Hunter and her out-of-drag look. A Puerto Rican-born queen who won her first drag pageant at the tender age of 16 (which also happened to be the first pageant she ever entered), Alyssa arrived in the Werk Room ready to make her island proud. “I hope you’re ready to be slayed,” she said upon entering. “Because it’s hunting season, bitches!”

Alyssa wasted no time showing off her pageant roots in the runway portions of the show, turning out look-after-look-after-look of polished glamor. Alas, a polished queen does not a Drag Race winner make. This week, when tasked with developing characters for a “Super Teaser,” Alyssa opted for a sassy Latina. And while the Puerto Rican sensation certainly got a few laughs, the judges felt that the overall performance lacked nuance, accusing the queen of always settling for the most “obvious” choices. Ultimately, Alyssa landed in the bottom, where she was forced to lip-sync to J.Lo’s “Play” against fellow contestant Kerri Colby. And despite delivering a strong performance throughout, the queen lost some crucial momentum when she tried to shoot dollar bills from a money-gun that didn’t work. Dinged by her faulty prop, Alyssa was sent packing.

Ahead of her elimination, NYLON hopped on a Zoom call with Alyssa Hunter to talk about the pressure of being a Puerto Rican queen, what the pageant circuit will teach you about professionalism, why being crowned the “Trade of the Season” can sometimes be “a lot of scary,” and how having the “blessing” of a gay father helped her find confidence in her art.

In your own words, what do you think went wrong leading up to this week's elimination?

I don't know why really. But I think one of the things that helped the judges make a decision about that very close lip-sync battle was the issue with my money-gun. That's the moment I think it was like, “Oh, fuck. She messed up the money-gun. It’s time to sashay away.” Because otherwise, I thought I killed that lip-sync — I looked amazing and I was doing my thing. I don't know why I was in the bottom because I thought I was doing pretty well in the challenge, but I respect the judges' decision. But, yeah, the money-gun…it was the prop that kicked me off.

One of the judges’ main complaints seemed to be that you were always going for “obvious” choices in the challenge. You slightly touched upon this critique in Untucked, when you talked about the way you always default to going as big as possible in your performances. Do you know why you feel so compelled to go big all the time?

Yeah, the thing that I remember Michelle telling me was, "Oh, you were trying too much. I loved your energy, but you were trying too much." And I was like, "Oh, fuck. I didn't even know that trying too much was a bad thing." For example, me, since I'm from Puerto Rico, I felt that I needed to step up my game for those bitches that literally speak English. So, yeah, it kind of sucked when they told me that, but I respect it.

Similarly, during critiques, you also talked about the competition being harder because of the language barrier, since English isn't your first language.

Oh yeah, definitely. I was literally saying that because I want to inspire people, [to let them know] that no matter what your language is, you need to step it up in your game. Just don't stop believing in yourself, and don't stop doing your thing to achieve your dreams.

I think season 14 might be the quickest that everyone seemed to reach a consensus about who the de facto “Trade of the Season” is — and it was you. How did that feel?

Oh, it is crazy. My personal page is like a porn page right now because I receive so many photos of guys who are like, "I want to fuck you!" And I’m like, "Oh, fuck." So yeah, it’s crazy but I feel great. Well, I think so. It's a lot of scary because there are some fans that are very creepy. But I feel love from others and I feel grateful for the fans that put that label on me. Even though I'm leaving early, that [label] put me in a position where I’m not in the shadows on the show. They're going to remember me: as the trade, as the polished queen — this Latina, this dreamer.

Someone earns that title every season. Did you ever think that it could be you?

Well, I didn’t even know [how] many of the girls [looked] out of drag. But in my group? Yeah. I would say that. I think I would be the trade. Maybe.

My father is one of my biggest inspirations in my life. He helped me a lot to grow up, and to have a gay father is a blessing. It’s super amazing. He loves me a lot, and besides my mom, he's my best friend. We can hang out together and he supports me a lot. As he always says, I’m his angel. He feels really proud of me and I feel really proud of my dad too.

How has he felt seeing you on television, showing off your art to the world?

Oh my god, he just feels so proud. I was actually at a gig last night in Boston, and he called me. He always calls me, even though I’m not in Puerto Rico and traveling. He was like, “Oh, everything's okay.” He's paying attention to every single step that I'm taking and watching what I’m doing right now, and he feels very, very proud. So that makes me feel so happy.

Earlier on in the season, you talked about the pressure that you feel comes with being a Puerto Rican queen — namely, that you feel like you have to represent for all of Puerto Rico. How do you think that pressure impacted your performance in the competition?

Well, I think I am an inspiration for my island. I broke the curse. To be in Puerto Rico and chosen from the island to go onto the show, I broke the curse. I gave hope and faith to the other girls that want to be on the show. I think they are very grateful and that I'm kind of like an inspiration for them. So I feel very proud and blessed to be in this position right now, for sure.

Every season, there’s a conversation about the difference between pageant queens and everyone else. You’re a proud pageant queen who has won several titles. Given that background, do you think you had any advantage or disadvantage coming into the competition?

No, I don't think I had an advantage, but at the same time, I don't think I had a disadvantage either. It’s all about demonstrating who you are — your essence. It doesn't matter if you are a pageant queen or if you came from a pageant background, or if you're a top model, or if you are a campy queen. The good thing about Drag Race is that demonstrating who you are as a person and demonstrating your essence is the most important thing. So, as I say in every single interview, I am a very versatile queen. Yeah, I come from a pageant background. I cannot erase that, and I feel proud about it because I learned a lot about being more professional from competing [on the pageant circuit]. But at the same time, I don’t think that's an advantage at all. And…I literally just answered you as a pageant queen. [laughs]

Now that you've been on the show, your life is about to change in a very big way. You're officially a Ru-Girl now, so what are you most excited for in your post-Drag Race career?