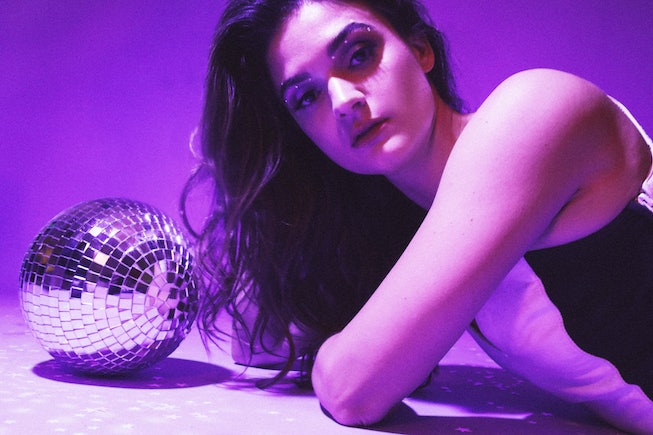 For Los Angeles-based songwriter Sam DeRosa, 2020 was a year of firsts. Not only did she release her first body of work, The Medicine EP, in November, she also gave one of the most-followed people in the world a hand with her own entrance into music. Alongside writers Billy Mann and Christian Medice, DeRosa helped pen Dixie D'Amelio's debut song, "Be Happy," a pop song with the unexpectedly melancholy premise of letting yourself feel sad. Of course, it then became DeRosa's first to break a million TikTok views just hours after its release.

Months later, over the phone, DeRosa's recollection of how she ended up placing the song sounds like the product of a lot of luck and happenstance, but in reality the New York native has been on her grind behind the scenes for the better part of a decade. After moving to Los Angeles to work as a songwriter, De Rosa finally got her big break as a contestant in the 2019 season of Songland, where she impressed judges with her honest storytelling and writing. The song birthed in the midst of it all was "Pill For This," an intimate, mid-tempo ballad that came from the experience of seeing her ex get engaged to a former friend. It now lives as a track on her debut EP, alongside other lovelorn, upbeat bops like "Unfinished," a Julia Michaels-esque anthem about the slippery nature of getting closure.

The quarantine-shot visual for "Unfinished" — all purple neon lights and DeRosa broadcasting from the intimacy of her bedroom — is debuting on NYLON on Tuesday. Watch it below, then read the Songland alum talk about her journey on the show, writing "Be Happy," and the songs she relies on during her own hard times.

How did you get into writing music?

Before I was born, my mom auditioned for my dad's band in the Bronx. They fell in love, they wound up starting a band together, starting a life together, and then they had a lot of musical children — I was one of them. I feel like because I was the middle child and everybody sang or was creative, songwriting sort of became my thing, because it was my way to really just figure out who I was. I joke saying I came out the womb singing; I feel like I really did. My whole life has just been music, and I realized what I loved the most was when I could write my own songs.

Was Songland your first time being in a more professional music setting?

Songland was my first, I guess, on TV moment, which is really crazy because I had no idea the gravity of what could happen when you're even on one episode. What's so funny is I had tried out for every show, [and] I had totally written off TV shows. I tried out for X Factor, and I was called back for The Voice like four times, and I went for American Idol when I was really young. One time they told me there were too many brunettes; I've been told everything. I was so scared to do Songland. When it happened I said, “You know what, this feels like an opportunity I shouldn't pass up.” I have nothing to lose. I'm still writing songs, I'm still believing in myself, I'm still doing music, so it can't hurt. I went for it, and it wound up being one of the best experiences I've ever had.

How did you end up working with Dixie D'Amelio?

I have a dear friend, one of the people I co-wrote "broken" for lovelytheband with. He and I had always planned to do a session with another one of my friends, and one time I just had a really, just terrible mental health day. Life was just not going the way I wanted, and when I first moved to Los Angeles, I bought a sign from TJ Maxx that said "Be Happy." A little cheesy, like, "Live Laugh Love" sign. I remember, I almost threw the sign away but I just turned it down. I was like, “I really just don't want to be happy today." I remember going to leave the room and I wrote in my phone: "Sometimes I don't want to be happy, don't hold it against me." And I texted my friends and I said, “Guys, I will wait until you are ready but I think I have an amazing idea and I really think we should write it together.”

We got the session on the books. We walked in, I had that song concept, I had a little bit of a melody, and my friends were just magical and we wrote that song pretty quickly. It just turned into a hang really, all of us expressing our feelings and relating to it. We finished the song and thought it was so wonderful — we couldn't really land it anywhere.

I thought to myself, do I put it out? It just felt like it was meant for somebody else. And then the pandemic started. And we got a call from somebody on Dixie's team saying, "Hey, this young girl is getting a following on TikTok, and she recently put out a video of herself singing, and she really resonates with ‘Be Happy’ and she'd love to sing it.” I instantly said yes. It's so funny because in the music business, they throw you her numbers and how many followers she has and I said, "I don't care about any of that." If she relates to the song, and she wants to push it as a single because it means that much to her, and she's willing to sing it for the rest of her life because it means that much, then hell yes!

I didn't know about TikTok at the time. I truly just thought that she sounded good and seemed like a really cool person, and I respected so much that she related to what I felt when I wrote it. It came out, and within a day, it had like a million streams across all platforms. And that's when I realized the magnitude of TikTok as a platform and what it does.

I'm very thankful to Dixie for being the person to be brave enough to tell that story, because as a songwriter, all you can ever hope for is that your songs will reach a mass amount of people, but you want it to be a song that you feel helps them. That's what I love, and I feel like it did.

You recently put out your own EP, The Medicine, which is full of breakup songs. What are some songs that you often rely on when you're going through a hard time?

I have a playlist on Spotify called "All The Feels" that I have been updating since 2016, and it is hundreds of songs. I put that on all the time. For me, I love a good raspy voice in an emotional song. Lately I've been really loving JP Saxe. I think he's so great. I always loved this song "Jealous" by Labrinth. It always makes me cry, it's so good. I love diving into singer-songwriters who I've never heard of before and finding new music, but if I have to say a go-to that I always listen to when I'm in a mood or I need to vibe out, it's probably Frank Ocean or John Mayer. I know they sound very different, but they both make me feel all the feelings.

I wrote the songs that I wrote on the EP because I felt like there wasn't a song that perfectly matched what I was feeling, and when there is one that perfectly matches what I'm feeling, I listen to it over and over again, and I always say to myself, "I could never beat this." So when I write a song that relates to a specific personal experience, it has to be because there's something out there that I don't feel quite explains how I'm feeling yet so I need to write it.