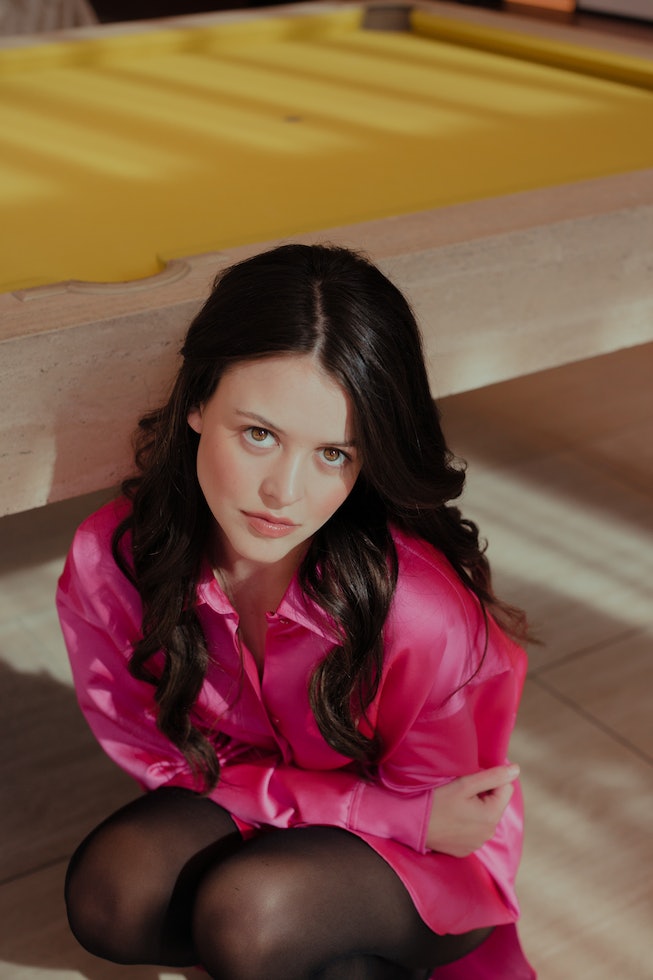 Sara Waisglass may have graduated from the ultimate Canadian high school, but when I speak to her over Zoom in late December, she’s doing something quintessentially American: waiting for McDonald’s. “My McDonald's just got here. I'm just going to grab it on the door,” the former Degrassi actress says, disappearing out of frame for a second. “I was so nervous that I was going to have to do that in the middle of that. Thank you so much, I apologize.”

Order set aside (a cheeseburger, fries, and chicken nuggets — “and I put it all on the burger,” she notes), Waisglass just as quickly returns to the topic at hand: Ginny & Georgia. Talking from her Toronto apartment just weeks before the show’s long-awaited season two premiere, the actress is just as — if not more — excited as the fans for the hit Netflix show to return. “We just had the press day where we did a million interviews at the Netflix building, which had the doll from Squid Game — it was right in the lobby and I was losing my mind,” she says, fresh off the show’s first ever in-person press run in Los Angeles. And there’s much more than just killer dolls to be excited about; here, Waisglass talks her return to high school, the Toronto acting scene, and what she actually knows about season three.

You really hit the Canadian TV show BINGO between this and your time on Degrassi – how did you go from one to the next?

I finished Degrassi in 2016, the same year that I graduated high school. And then I did another Netflix show, but when Ginny & Georgia came around, I wasn't working on anything. I remember reading the audition and being so excited to go in the room and do it, which is rare because normally I'm sh*tting myself. But I was really excited for this one and they had me audition seven or eight times — I'm friends with the casting director now because we've hung out so much because I auditioned eight times and he sent me all of my auditions. When I booked it, I was in my bed and I was crying because I thought I didn't get the role. I was crying myself to sleep, and then I looked over at my phone and I got a text and it was like, you got Maxine.

They really made you work for it.

They played with my heart a bit, but I know that Sarah and Deb really fought for me, which is something I'm probably going to go to the grave grateful for.

What was Maxine like on paper when you first got the script?

Honestly, the most specific voice I've ever read. I could see it so clearly. I could see her paragraphs and see that she would talk fast and I could sense her energy right off the page because it was just brilliantly written. And I loved her as a person because she was just proud and happy and energetic and brave, which I really loved seeing a woman be brave.

Did you do a chemistry read during any of your auditions?

Yes, but not with Toni [Gentry] and not with Felix [Mallard, who plays Marcus, Maxine’s twin], which I think is funny. Me, Chelsea [Clark] , and Katie [Douglas] did a chemistry read for Mang, basically, which was very fun because Chelsea obviously I worked with on Degrassi and Katie, I kind of knew through the auditioning circuit and we all kind of met for coffee right before and so we got to know each other and became buddies and I think that energy was just very easy to sense in the room when we all did it together.

Is the Toronto audition scene pretty tight-knit? Do you know most of the actors in your age range at this point?

Yes. We know all the pockets of places where the auditions are held. You know the best way to get there and when traffic is. You know the people, obviously. It's honestly an amazing community. There's so many people you can reach out to and be like, "Hey, can you read with me for this?" Or, "Do you have a studio at your place that I can use?" The other day I left my apartment and I saw someone that I know as an actress too. She's on floor three, I'm on floor nine. And I was like, "Okay, we can read with each other now." So it's a very small community but everyone is just so kind.

Did you know Raymond [Ablack, who portrays Joe on Ginny & Georgia and starred on Degrassi from 2007-2022], before you started on the show?

We were never on at the same time. But there was a reunion episode, like the 300th episode. He was in it and we were in the scene together and we were singing together. I forgot about it completely. And then someone tagged me in it on Twitter and I sent it to him. I was like, "Do you even remember this?" He was like, "No."

I imagine being a working actor in Toronto is like six-degrees of Degrassi at all times.

You don't live in Toronto until you match with the Degrassi person on Tinder.

You graduated Degrassi, one of the most famous high schools ever, a few years ago, and in Ginny & Georgia, you’re back in class. Was that a tough return for you?

Yeah, honestly, sitting in that classroom at that desk gives me hives because I remember being in class myself. I mean, it was not that long ago. I'm 24, so it was only six or seven years ago. It's definitely weird going back to it, but every character I play that's in high school has a different high school experience than me.. I love being able to have this huge friend group on Ginny & Georgia. Because I was shooting during my high school years, I didn't have a huge group like that and I've always wanted that. So the fact that the show gifted me that is amazing.

How does Maxine compare to high school Sara?

She's definitely louder. I make this comparison: I feel like Maxine is me if I didn't have anxiety and if I drank 10 coffees a day. But we have the exact same heart. We love people fiercely and that's probably the thing that drew me to her the most. And she's funny. All I ever wanted to be in high school was funny.

The time between season one and two was a challenging wait for viewers. How was it for you as an actress?

It took me a long time to shake off Maxine after season one. I still had her energy, I was still high on life, and then the pandemic hit and I was like, "Oh." So then she went away and it was so sad. When I was on set for a camera test for season two, the first time I had my hair and makeup and my clothes on, I cried because I missed this character so much. And just physically being her again was so meaningful to me and it was easy to hop right back in.

Plus, you probably had people asking you about it every day.

That's all they ask. That is literally all they do. But yeah, I mean that's just proof that people love it, which makes me so happy and proud. But yeah, holding onto the secrets is really hard. I went and spoke at my high school because they asked me to come back as an alumni. Everyone in the audience was like, "When's season two?" And I was like, "I can't tell you I'm under strict contract."

To pre-empt the inevitable — on the record now, do you know anything about season three?

I would tell you if I did — well, if I was allowed —but I genuinely don't know anything. I really hope you get a season three because I think the ending of season two is nuts.

For now, what are you excited for viewers to see in season two?

I really love Ginny. Watching Toni is incredible because she's incredible, but watching how she struggles and how she deals and her finding herself is just so important for so many little girls. And talking about mental health obviously, that's the most important thing.

Personally, what I'm most excited about, especially with Max, is her relationship with her brother. You see that kind of shift and change. Obviously at the beginning she's like, "F*ck you." As the season goes on, you'll see that she and him are always there for each other when they really need it, which is really beautiful. With season one when people asked me, "What do you want to see in season two?" I was like, "Really want to see more of that sibling relationship."

It’s the rare show that lets the main characters be unlikeable, especially in this season.

We talked about that a lot. I was so pissed at Max, I was like, "Can you please just go talk to your friends, communicate and all be friends again please." But then I realized Max's huge heart is also capable of huge pain and she's dealing with that pain the way she knows, which is dramatically, and I kind of respect it.

NEXT UP
Culture
Netflix Is Seriously Cracking Down On Sharing Passwords
A Night Out
A Night Out With Rachel Bilson
Culture
Phoebe Dynevor Will Not Return for Bridgerton Season 3
Culture
6 Shows To Binge Once You've Finished 'The White Lotus'
Style + Culture, delivered straight to your inbox.