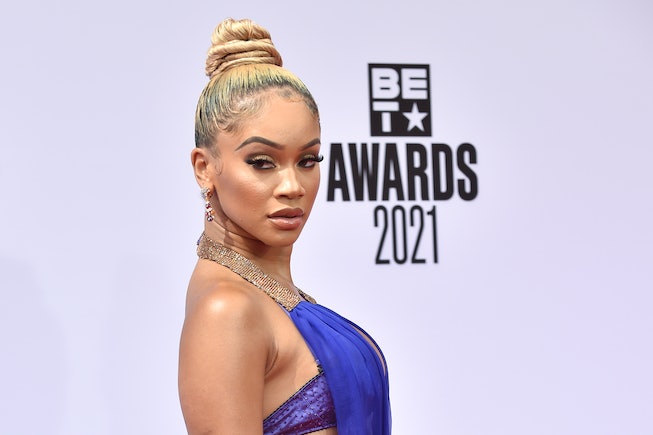 Saweetie — the certified platinum rapper who brought us hits like “Icy Girl,” “My Type,” and “Back To The Streets” — has an album on the way, but the producer behind it remains a mystery. The forthcoming 17 track record, Pretty Bitch Music, doesn’t have a release date, but could be dropped any minute. In the meantime, people are wondering who’s helping behind the scenes and if she’s still working with the controversial producer Luke Dillon, aka Dr. Luke.

In an interview with Vulture, the rapper opened up to writer Hunter Harris about her experience with Luke — who was accused of raping Kesha in 2014 and is currently embedded in a legal battle with the singer — and addressed the potential for any collaborations down the line.

The two reportedly began working together last summer, when they co-wrote and produced “Tap In.” Harris reports that Saweetie claimed to be unaware of the allegations against him at the time. “I’m so green,” she said last year. “Maybe that’s a double-edged sword because I’m coming into the studio and I’m not knowing who these people are. I was able to learn about all of his achievements, and all of the allegations as well, after a couple of sessions.”

However, she continued to work with Luke this year, and created the song “Best Friend” featuring fellow rap star — and signee to Luke’s label, Kemosabe Records, Doja Cat. During the interview, Saweetie said that this was a result of a previous work agreement.

“When I was put in the position to work with him, it was a bundle deal. I had those songs for over two years,” she said. “So what do you think? Do I compromise my artistry, do I keep them in the vault, or do I release them?”

Though she did follow through with their deal, it seems the likelihood of another collaboration is slim. When asked if she would work with Luke again, Saweetie replied, “What do you think?” then added, “Hopefully we keep ourselves out of any controversial situation in the future.”