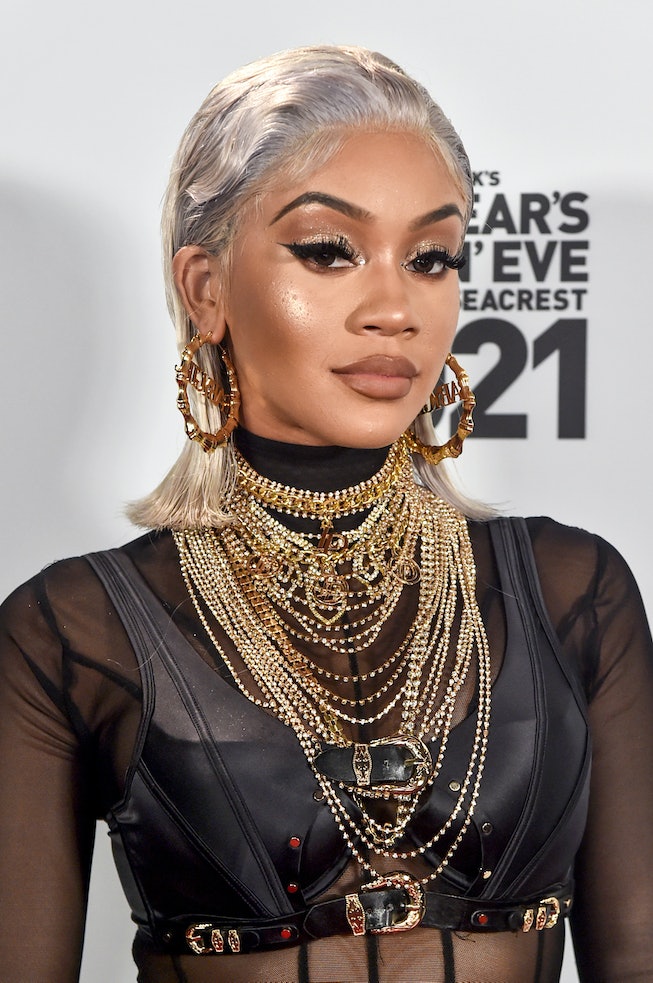 Rap’s sweetheart Saweetie graces the latest cover of W Magazine for their May music issue in anticipation of her long-awaited debut album Pretty Bitch Music, slated to arrive late this summer. In the article, she discusses growing up in Northern California and grinding her way through college at the University of Southern California, but the most interesting part comes at the very beginning, as it details the behind-the-scenes happenings at the cover shoot.

It turns out, Saweetie fired out those Twitter-breaking tweets about her split with Quavo at the same time she was getting her hair done for the magazine photos. Described by the author as “quiet” and “self-contained,” Saweetie apparently “tapped out a kind of breakup statement on her phone” while sitting in the makeup chair.

The statement in question arrived on Twitter back in March and read: “I’m single. I’ve endured too much betrayal and hurt behind the scenes for a false narrative to be circulating that degrades my character. Presents don’t band aid scars and the love isn’t real when the intimacy is given to other women. I emotionally checked out a long time ago and have walked away with a deep sense of peace and freedom. Excited for this new chapter of elevation.”

Although Saweetie wouldn’t discuss her relationship with Quavo or their breakup in-depth in the interview, she did offer some in-the-moment commentary of her headspace when she went public with their split.

“I’ve learned that the world doesn’t stop for anybody,” she told W during the shoot. “And it’s for sure not going to stop for me just because I got my heart broke. I was grateful to be doing the photo shoot. I was like, I can deal with all this later.”

She also revealed that she’d stopped reading the internet’s reaction to her announcement, saying: “I could give my attention to something that could drain me or I could focus on what would empower me. And that is this shoot.” If that isn’t the icy girl mentality, then we don’t know what is!

Rumors of Saweetie and Quavo’s breakup were ignited just the day before when fans noticed that the “My Type” rapper had unfollowed Quavo on Instagram. Following her statement — and a petty response from Quavo himself, in which he said, “You are not the woman I thought you were” — the internet was in a tizzy as the rap royal couple was no more.

In the following weeks, security footage emerged of what appeared to be a physical tiff between the two artists in an elevator, in which they seem to be tussling over suitcases and bags. In separate public statements, the two artists confirmed that the incident happened over a year ago and didn’t contribute to their breakup. "I haven't physically abused Saweetie and have real gratitude for what we did share overall,” Quavo’s statement to People read.

NEXT UP
Entertainment
Getting Ready With Pale Waves For Their 2022 New York City Concert
Entertainment
Relive ‘00s New York With Yeah Yeah Yeahs, The Strokes In ‘Meet Me In The Bathroom’ Trailer
Entertainment
Taylor Swift Revealed The Full 'Midnights' Tracklist — And Lana Del Rey Is Involved
Entertainment
Aya Nakamura On Preparing Her Fortnite Soundwave Series Performance