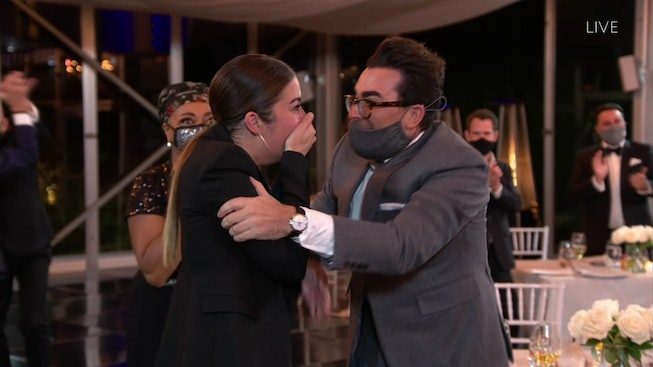 Schitt's Creek has won seven Emmys at the 72nd Emmy Awards, including for Outstanding Comedy Series, beating out competitors like Insecure, Curb Your Enthusiasm, Dead To Me, and The Good Place. The show also won the heavy hitting categories of Best Actress and Actor in A Comedy Series, going to Catherine O'Hara and Eugene Levy respectively for their roles as the glamorously eccentric matriarch and patriarch of the Rose family.

The Canadian show, created by Dan Levy (Eugene's son), received a record-breaking 15 Emmy nominations for its final season this year. The series also won for Outstanding Casting for a Comedy Series, and Outstanding Contemporary Costumes. NYLON It Girl Annie Murphy won for Supporting Actress In A Comedy Series for her role as the brilliant ditz, Alexis Rose.

Dan picked up his own (three) trophies as the creator of the show, for Outstanding Writing For A Comedy Series, Outstanding Directing and Supporting Actor in A Comedy Series. Accepting his awards remotely from a viewing party in Toronto in a Thom Browne skirt suit, Levy paid homage to fellow category nominee Issa Rae (and cracked that "the Internet is going to turn on me" for winning so many awards), while O'Hara expressed her gratitude at the opportunity to play a layered performance of "a woman of a certain age." Eugene cracked a joke in classic fashion about his first 'straight' role earning him a comedy Emmy. Even if the show's cast hadn't won the Emmys, they'd still win the class act award.