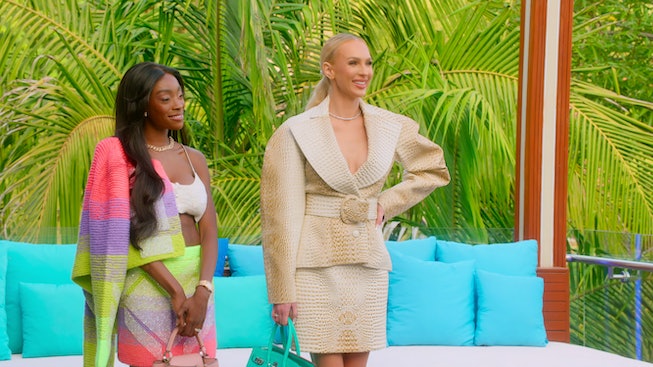 Right up at the top of the best things about Netflix’s Selling Sunset — next to the drama, the luxurious, over-the-top homes, and outrageous lifestyles of the high-powered realtors that star in the series — is its peculiar brand of music.

The show’s girlboss-core soundtrack, full of high energy, “go girl”-esque anthems that feel simultaneously too cringe to take seriously and extremely fitting for the lifestyle being depicted on-screen, has become a point of discourse on Twitter as of late with the arrival of the show’s fifth season.

Online, the reviews from viewers range from utter disgust at the absurdity to deferential awe and respect, perhaps for the show makers’ continuing gall to outdo themselves every season. (In episode 8 of the new season, the show includes a song with the actual, real lyric: “I’m not the type to break up with my kidney/ So watch me while I work.”) But whatever one’s ultimate consensus of the music may be, one thing is clear — it is iconic and memorable, to say the least!

Now, doing the lord’s work (or at least of the show’s music supervisor, who didn’t anticipate the soundtrack getting any attention at all), someone has collected all of the music that’s been featured on Selling Sunset from Season 1 to Season 5 in one cohesive Spotify playlist.

Looking at the truly tremendous (and incredibly obscure) list of songs, there are a few things that can be gleamed about the show’s musical identity: they love the artist going by the name of Lady Bri (nearly all of her songs from one album have made it on the show), and pretty much every one of the song’s titles could work as a phrase printed on an inspirational Marshall’s mug.

Earlier this week, Selling Sunset creator Adam DiVello was interviewed by Time where he described the vibe of the show’s music as “fun” and “aspirational.” “[The show is] also dramatic, so we use the music to help tell those stories. In most cases the songs are fun, and they tend to have somewhat of a message in them,” he said.

We don’t disagree, and will even cosign some of those messages as well — we, too, are not trying to break up with our kidney. And who knows, maybe there is something in the idea of not only dressing for the job you want, but listening to the music from it, too.